Under Armour Inc.'s (NYSE:UAA) last reported earnings in February were another blowout, with sales up more than 30% in 2014 and earnings per share up a strong 27%. If you're an investor in the athletic apparel, footwear, and active technology maker, then you know the share price has absolutely skyrocketed as well, almost doubling since the beginning of last year.

The thing is, Under Armour's insane growth rate in 2014 wasn't an anomaly, but rather a continuation of what has happened over the past five years. 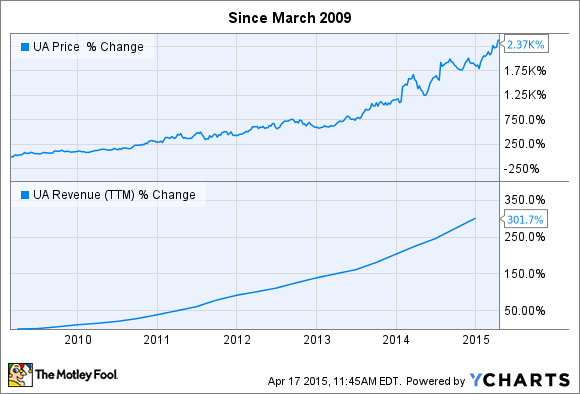 The company has gone like gangbusters since the end of the recession, and the stock has exploded since the market bottom. At the same time, Under Armour's valuation has also spiked:

I've added competitor Nike Inc. (NYSE:NKE) to that chart for some context. Don't get me wrong -- I'm by no means arguing the two should carry similar valuations. After all, Under Armour's amazing growth deserves a price premium, right? But investors need to be aware of the valuation, because it does create some risk for shareholders.

With the company set to release first-quarter earnings on April 21, what can we expect? Let's look at the most important things.

Under Armour has invested more than $700 million over the past three years in connected fitness, acquiring the three key brands that make up its portfolio: MapMyFitness and MyFitnessPal in the U.S., along with Endomondo in Europe. The biggest driver behind this investment? This is where consumers are going.

In a recent survey that Under Armour CEO Kevin Plank cited in a February presentation, 57% of consumers said their smartphone would be the media source they would miss the most, compared to only 16% saying TV. But that's just part of the equation. Smart devices have proven to be great for measuring numerous biometrics, including activity level and heart rate, and innovative apps that can use that information have created a real marriage between technology and the athlete.

Building a portfolio of connected fitness apps is about more than just selling apps and memberships, though, it's an extension of what Under Armour is all about. As Mette Lykke, co-founder of Endomondo, put it, "Under Armour wants to make all athletes better. We [app makers] just want to make more athletes."

Footwear and international sales remain key drivers
While connected fitness is an important long-term investment and strategy, the company's primary two catalysts for near-term growth are without a doubt footwear and expanding its international business.

Footwear sales increased 44% last year, but at $431 million still represented just 15% of total sales. As a comparison, Nike generates closer to 60% of sales from its footwear business. While it might never become the majority of the company's sales, there's clearly room for Under Armour to increase its shoe business.

Similarly, growing its presence abroad is critical to the company's future. Last year, international sales basically doubled, but were still less than $300 million. Comparatively, more than half of Nike's sales occur outside North America. And Nike is also focusing on its opportunity to grow international sales.

Considering that the global middle class is expected to expand by roughly 1 billion people over the next 30 years, there's no getting around the importance of establishing Under Armour's brand outside the U.S. 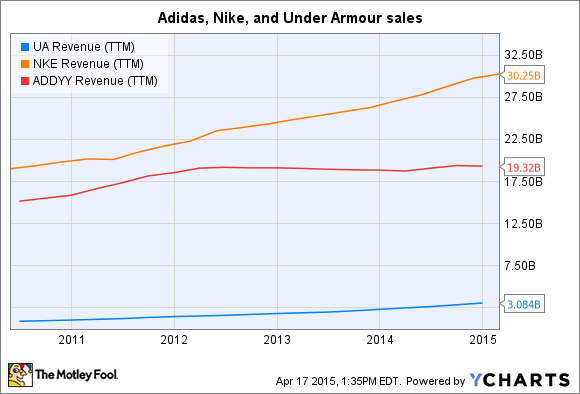 Risks, projections, and remembering it's a long game
It's hard to argue that Under Armour shares aren't "expensive" right now, maybe even overvalued. But that's not the topic of this article, besides pointing out that there is some short-term risk related to the company. After all, the stock has fallen as much as 25% over a relatively short period in the recent past (specifically mid-March to late April of last year). It also fell about 15% over several weeks last fall. The point? After each drop, the stock recovered relatively quickly, and is up 80% since April and 39% since October.

The risk is in trying to outsmart and time the market, and that's something you can control through discipline and a long-term perspective.

Yes, Under Armour will almost inevitably report an underwhelming quarter at some point, and the stock is going to get smacked down. Here's the catch: We can say the same thing about the market itself. Eventually there's going to be a "correction." But we also know there's no way to accurately predict when that will happen.

Looking ahead
So at some point the stock will probably get knocked down 25% after a disappointing quarter. But how much will it rise between now and then? We each must evaluate our willingness to be exposed to the risk of short-term volatility, while not divorcing it from the long-term potential of the company.

If you are a shareholder or planning to invest at some point, keep an eye on the company's growth internationally and in footwear, because there's no doubt these are Under Armour's two leading drivers both now and for the next decade. The better you understand the company's focus and results, the easier it is to understand the risks.

Can Under Armour Inc. Keep Up the Pace? What You Need to Know Ahead of Q1 Earnings @themotleyfool #stocks $UAA $NKE Next Article
Current