I'd bet that almost every single restaurateur in the universe would sell off body parts to get those kinds of results. But in typical fashion, Wall Street's response is to sell off the stock in the after-hours, either in disappointment, or trying to be the first to "take profits" before a bigger sell-off ensues when the market opens for business the day after earnings.

For investors who don't have the day-to-day outlook, there's a lot to like about this quarter. However, there are some things that investors need to keep in mind. Let's take a closer look.

Last of the big comps quarters?
Chipotle's big price increases last year were fully rolled out in the second quarter, so it's likely that the double-digit comps numbers could be coming to an end. With that said, beef prices have been a challenge for the company, and last year's price increase only covered about 80% of the additional cost of beef due. The company has been relatively steadfast that it doesn't want to increase prices again so soon, but if beef prices continue going up, it may not have a choice.

Either way you slice it, management's guidance has been consistently for low- to mid-single-digit comps growth over the past several quarters, a number the company has obliterated regularly. While comps growth is almost a lock to come down some, it's really not clear how much that will be.

Making a lot of money despite high food costs
Even if the comps do come down some, the company has found a relatively solid balance between pricing and optimization. Even with beef and tortilla prices up, restaurant-level operating margin increased 160 basis points to 27.5%, and food costs as a percentage of revenue fell to 33.9% of revenue. These were both year-over-year and sequentially improved results.

While some of that -- especially the food costs as a percentage of revenue -- is partly a product of which items customers choose, Chipotle continues to execute on solid operational performance.

You get a Chipotle! And you get a Chipotle!
Chipotle opened 49 new locations last quarter, keeping it well on track for the 190 to 205 planned for the year. As we discussed in the earnings preview, the core Chipotle business remains the driver of growth for now, with its ShopHouse Southeast Asian Grill and Pizzeria Locale still years away from any meaningful expansion.

Wrapping it up: Look past tomorrow
While it's never a good idea to be too "pie in the sky" with any company, and to think the growth story at Chipotle will never end, it's just as important that you keep your investing horizon in mind and don't get spooked by the market's short-term reaction and focus. Case in point: Chipotle stock has fallen by 5% or more within a few days of earnings, three times (and it looks like tomorrow could be four), since last April, while it has gone up only once.

Overall, the stock is up more than 27% since then: 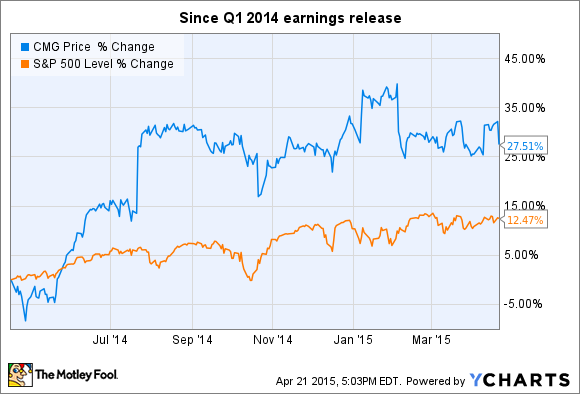 The point? Chipotle just reported a solid quarter and continues to show its operational chops even in the face of high food costs for two of its most popular ingredients. If you were trying to outsmart the market, you'd have missed out on one of the better performing stocks over the past year. More importantly, you'll never get these kinds of returns if you're too focused on short-term performance: 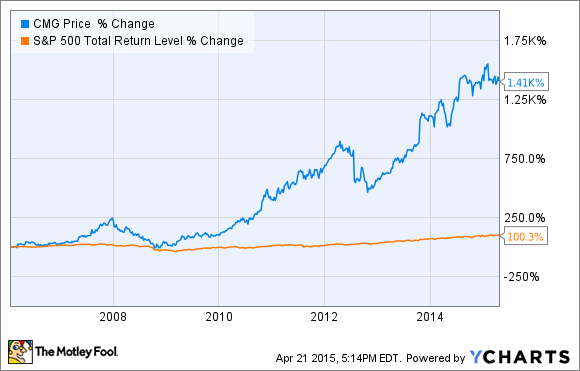 If you're investing for the long term, you can't control the market's short-term volatility, but you can choose to invest in best-in-class operators like Chipotle. The bottom line is, if Chipotle continues to be one of the best-run restaurants in its business and stays true to its "Food With Integrity" values, you're probably going to do well as a shareholder.