Following two disappointing earnings reports, AZZ Incorporated (NYSE:AZZ) delivered a solid set of fourth-quarter results and reaffirmed its full-year forecast for 2016. Going back to the previous quarter's results, management had lowered expectations for 2015 earnings amid outlining some negative headwinds in the oil and gas market, alongside push-outs of some large nuclear-related projects. How did these headwinds affect the fourth quarter, and what about the company's guidance?

A quick look at the key numbers:

In a nutshell, revenue came in behind expectations, but earnings were ahead. In fact, EPS grew 57.5% compared with last year's fourth quarter, but don't get too excited. Ultimately, AZZ's earnings were heavily affected by a favorable tax rate (14.5% in the quarter versus 39% in last year's fourth quarter). A better way to gauge results is to look at operating income, which came in 9.4% ahead of the same period last year -- still a decent growth rate.

Impressive targets
As ever, the real key is guidance, and despite some negative headwinds, management's EPS guidance for 2016 implies EPS growth of 8.7% to 28.5%. It's a pretty big range, but readers should note that the midpoint of the range is significantly ahead of the 15.8% growth analysts expect.

Moreover, the revenue guidance implies an increase of 7.1% to 13.3%. That looks like an ambitious target, particularly as Illinois Tool Works, an industrial bellwether that also sells welding solutions to the steel industry, recently lowered its overall organic revenue growth target. In addition, total company backlog at the end of the quarter was $332.6 million, a figure only 2.3% higher than backlog at the same time last year.

On the other hand, management affirmed its belief that revenue will get a boost from the push-outs in the nuclear projects (which affected the previous quarter's results) starting to ship in the coming quarters.

AZZ Incorporated by segment
The company reports out of two segments, with Galvanizing Services (corrosion protection to the steel production industry) generating $87.8 million in operating income in 2015, compared with Energy (electrical power distribution products), which contributed $38.7 million. Clearly, Galvanizing Services are the key to AZZ's growth, and it's also the higher-margin segment.

However, a look at segmental margin reveals that Galvanizing Services margin declined compared with last year. 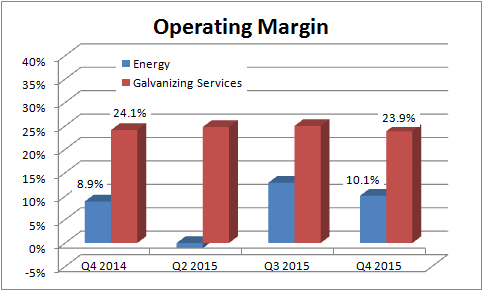 In discussing the results, both in the press release and earnings call, management suggested a few things that are likely to have affected Galvanizing Services margin, including "severe weather conditions" and taking on larger but lower-margin work.

Turning to the Energy segment, CEO Tom Ferguson discussed some headwinds in the press release but also cited an improving backdrop: "Within the Energy segment, WSI was affected by the refinery strikes that slightly reduced the amount of work completed during available turnarounds. We are seeing improvements in our quoting activity within our Energy business segment, resulting in improved backlog and we anticipate further improvements in our core markets during fiscal 2016."

The takeaway
By management's own admission, the company's "markets remained mixed during the fourth quarter." However, guidance looks positive, and management's commentary is relatively upbeat. AZZ had some operational difficulties in its 2015, which means it has some easier comparisons to beat in terms of earnings. On the other hand, its revenue guidance looks upbeat, particularly given the difficult conditions that other industrial companies have referenced recently. Now it's time for AZZ to deliver.