Jason Hall, Rich Smith, and Steve Heller
(TMFVelvetHammer)
Author Bio
Born and raised in the Deep South of Georgia, Jason now calls Southern California home. A Fool since 2006, he began contributing to Fool.com in 2012. Trying to invest better? Like learning about companies with great (or really bad) stories? Jason can usually be found there, cutting through the noise and trying to get to the heart of the story. Follow @TMFVelvetHammer

Every stock has some level of risk. Make sure you understand it. Source: Flickr user Kevin Johnson

Many investors look for a measure of safety in the stocks they buy, and as you get closer to retirement, finding "safe" investments can be even more important as you need to protect your nest egg from unexpected losses. With that in mind, we asked three of our top contributors to discuss a company that investors see as being relatively safe, but may actually have more risk than you realize. They gave us two stalwarts in Nucor (NYSE:NUE) and Lockheed Martin (NYSE:LMT), and quick-turn manufacturer that's often viewed as the "safe" bet in 3D printing, Proto Labs (NYSE:PRLB).

While our contributors aren't calling these stocks particularly high risk, there's no such thing as a risk-free investment. Let's take a look at the risks you may have missed with these three companies.

Jason Hall: It's hard to call a dividend stalwart and industry leader like Nucor "unsafe," but there might be more risk in the stock than it seems. After all, the stock price has already fallen about 18% from its peak last September, and faces a number of continuing challenges. 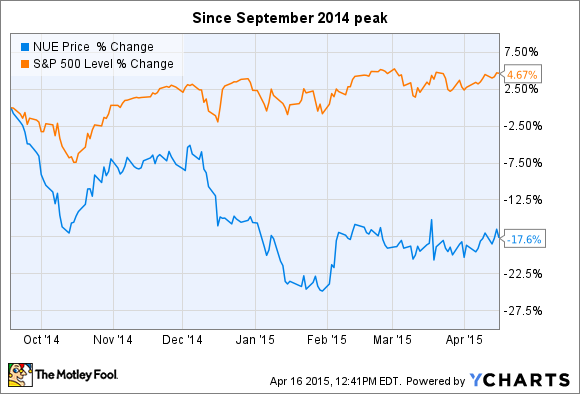 The biggest current concern is the collapse in oil prices -- caused by a serious global oversupply imbalance -- has led many American oil and gas producers to gut spending for 2015. This major reduction in drilling activity will have a big impact on Nucor and other steelmakers who supply pipe and other steel products to oil and gas producers, and it could be years before demand returns to 2014 levels.

Furthermore, while the U.S. government has taken steps to help level the playing field, imports remain a major risk for American steelmakers. Add in the still slow infrastructure and commercial construction markets, and it's not clear when the steel demand cycle will fully rebound.

Lastly, Nucor's valuation is still a risk, with a price-to-earnings multiple above 20, well above its long-term average. The market has been paying a premium for dividend payers with bond yields so low, but interest rates are expected to increase, likely to lead to a shift in capital away from dividend stocks and back toward bonds over the next few years. When this happens, Nucor's stock could be further devalued, especially when factoring in the considerable business challenges it faces.

Don't get me wrong: Nucor is one of the best in the business, and a solid long-term investment. However, if you're counting on dividend growth and capital preservation over the next few years, there's more risk than you might realize.

Steve Heller: Although rapid manufacturer Proto Labs (NYSE:PRLB) may seem like an odd choice for this discussion, considering smaller companies with rich valuations aren't often associated as being "safe" investments, its consistent track record of growth has given the impression that the underlying business will continue growing steadily in the years ahead.

After all, Proto Labs has done an excellent job growing its revenues, and having those sales trickle down to the bottom line over the last five years: 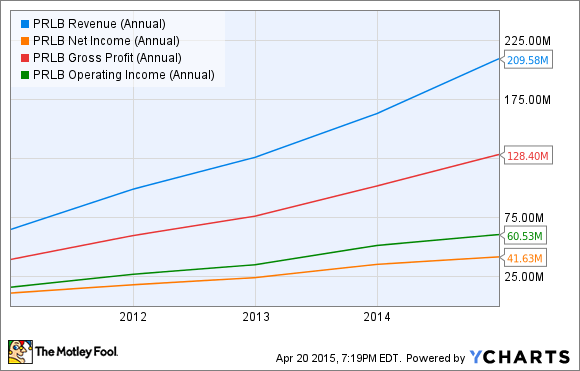 Unfortunately, the nature of Proto Labs' quick-turn manufacturing model makes it particularly vulnerable to economic uncertainty, especially in environments where capital spending dries up. That's because Proto Labs operates a highly transactional business by offering the fastest turnaround times in the industry.

With speed being one of Proto Labs' major competitive advantages, the company doesn't carry much of an order backlog to act as a buffer in times of economic uncertainty. This could be problematic in an environment where demand for capital goods is weak. In this scenario, Proto Labs' underlying business could experience significant downside -- and shareholders would likely experience pain.

The way that Proto Labs could mitigate this threat is to continue serving a greater number of product developers, and make up for any potential shortfalls with increases in volume. Including its Fineline 3D printing acquisition, Proto Labs served a record 10,231 unique product developers in the fourth quarter, representing an annual increase of 40%.

While this growth suggests that Proto Labs' suite of rapid manufacturing services are a compelling value proposition in the marketplace, the company doesn't have much public experience operating in recessionary environments. In other words, Proto Labs' business could look entirely different if global economic activity showed signs of material weakness.

"There are those that see JSF as the last manned fighter. I'm one that's inclined to believe that." --Adm. Mike Mullen, chairman of the U.S. Joint Chiefs of Staff

With no less a defense luminary than the former chairman of the Joint Chiefs saying the F-35 is the "last manned fighter" jet we ever build -- and with Lockheed Martin (NYSE: LMT) holding the contract on building that fighter, you would be correct in questioning the safety of Lockheed Martin as a "safe" stock. While bulls point to the fact that Lockheed has a lock for the next 55 odd years that Pentagon planners expect the F-35 to remain in service, they ignore some key issues.

Continued problems with production of the F-35 -- everything from engines that go "boom" to a main gun that won't -- suggest that this $1.5 trillion program may never go the distance. If that happens, a big part of Lockheed Martin's future revenue stream could ultimately go away.

At the same time, Lockheed has suffered setbacks in its efforts to diversify into alternative energy, even as its profitable near-monopoly in launching satellites for the U.S. government is under siege from upstarts like SpaceX.