A judge has ruled that Lumber Liquidators' case against one of its detractors doesn't have merit. Image: Rumble Press via Flickr.

Long before the well-publicized 60 Minutes revelations, Lumber Liquidators (NYSE:LL) was accused by a number of people and groups of selling flooring with formaldehyde emissions well in excess of regulatory allowances.

The first hint of trouble
As early as June 2013, Seeking Alpha published an article by Xuhua Zhou, a contributor identifying himself as a hedge fund analyst, alleging the flooring specialist was violating California's emissions laws.

The article pushed for the California Air Resources Board to take action against Lumber Liquidators. Apparently it did not. However, several class action lawsuits charging Lumber Liquidators with similar violations have been filed since then.

Lumber Liquidators called the advocacy group's allegations "simply flat-out false" and countersued for defamation, alleging "trade libel, misrepresentation, and market manipulation." When 60 Minutes began its own investigation of Lumber Liquidators, it focused on those charges and the lawsuit by GCM.

A chemical attraction
The flooring retailer has rebutted the news program's insinuations, saying the deconstruction tests performed were flawed because they altered the product from the way it would be found and used in the home.

Formaldehyde is a naturally occurring chemical so it's going to be found in the home as well as in many household products, including laminate flooring. But the chemical breaks down over time and doesn't accumulate in the environment or the body so it poses little inherent risk. Lumber Liquidators maintains its finishing processes seal in the chemical thereby limiting exposure.

That's the reason why it welcomed the investigation being launched by the U.S. Consumer Products Safety Commission. The CPSC will use industry standards to test the flooring, and this ought to back up what Lumber Liquidators has said all along: that its flooring was safe and met applicable regulations. 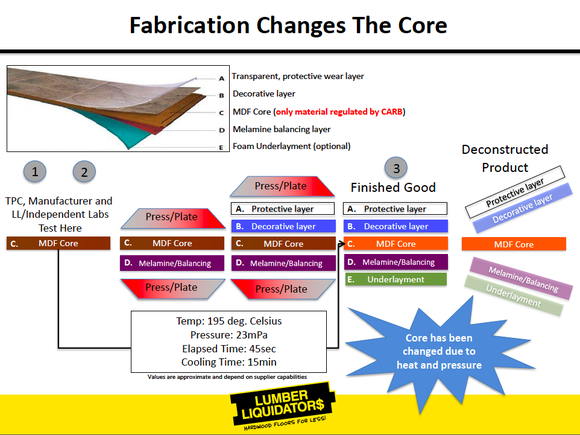 When it rains it pours
Still, Lumber Liquidators suffered a minor setback last week when a California superior court judge dismissed its countersuit against GCM. The judge ruled that the case was a violation of the state's anti-SLAPP law that seeks to prevent interfering with someone's First Amendment rights. The judge also said the flooring specialist failed to show it would prevail in a claim of defamation.

Essentially, the court ruled that experts differed on the suitability of each side's testing methods, and that this disagreement would make it difficult for Lumber Liquidators to prove defamation.

Witness for the defense
Moreover, stock analysts are beginning to perform their own tests now, and they're coming to the same conclusions as the flooring specialist.

Raymond James commissioned tests that confirmed Lumber Liquidators' defense, leading it to upgrade the company's stock to "outperform" from "market perform" and slap it with a $40 per share price target. That's a better than 20% gain from where it currently trades, but would still be some 40% below where it was when the 60 Minutes report aired.

And now the retailer faces new charges -- and another lawsuit -- saying the testing labs it used to run its tests weren't accredited to test for formaldehyde by the American Industrial Hygiene Association.

The plaintiff's lawyer says this is akin to being set up with a doctor after being told you have cancer, only to find out you're seeing a chiropractor. Lumber Liquidators responded by saying the lab's subsidiary did use appropriate labs to conduct its tests. 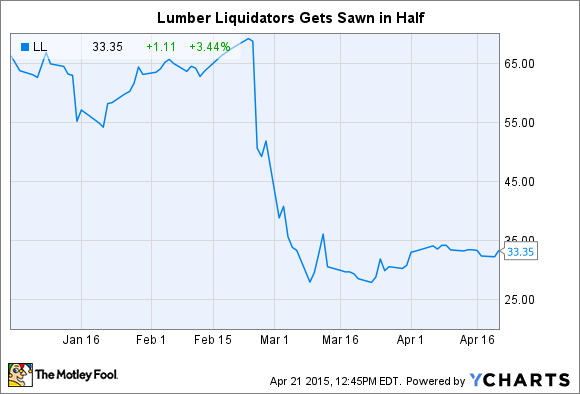 Floored by the allegations
Flooring sales at Lumber Liquidators tumbled 13% last month as comparable store sales plunged 18% year over year in the wake of the allegations. Although the worst of the hemorrhaging is seemingly over, investors probably shouldn't expect any real movement higher until the CPSC results are released in the months ahead -- and then only if Lumber Liquidators is vindicated.

Until then, Lumber Liquidators could suffer from any number of setbacks like the dismissal of its suit and the filing of new lawsuits by other trial attorneys seeking to pile on. But with analysts coming around to its point of view, the flooring retailer may yet have a reason to celebrate.