Hydropower's heyday is over. California is in the fourth year of a major drought, and it's not looking to let up any time soon. While everyone's worried about agricultural effects, California's energy portfolio may be set for a big shake-up as hydropower hits hard times. But every closed door opens another -- or three. Here are three secret winners from the California drought.

Hydropower leaves big shoes to fill, and rooftop solar panel kits aren't going to cut it by themselves. For California, economies of scale are the only way to fill this fast-emptying energy void.

First Solar (NASDAQ:FSLR) is ready with solar scale. It's the undisputed leader in utility-scale solar power and has been both the brains and brawn behind some of the biggest solar systems around. In February, it celebrated the opening of the world's largest solar power plant, a 550 MW facility located in -- you guessed it -- California.

First Solar stock has had a rough few years. The company floundered in its initial switch from rooftop systems to utility-scale solar, but bigger seems to finally be better. Rather than racing after the most energy-efficient module, First Solar has focused its efforts on a cheaper cadmium telluride solar cell with a record 21.5% efficiency. The company also saves on labor since it doesn't have to lug its laborers out to individual small-scale rooftop systems.

All of that has helped First Solar hit cost-competitiveness with conventional energy sources, setting it up for a successful hydropower-free future.

First, it's embraced the natural gas revolution. While renewable energy can and will replace some of hydropower's capacity, California has also become increasingly reliant on natural gas power. GE is the world's largest supplier of heavy-duty gas turbines, and its natural gas electrification industry received a shout-out in the company's latest annual report for "driving demand" in its power conversion business.

General Electric Company is also at the forefront of a clean and greener turbine for wind energy. It's one of the world's leading wind turbine suppliers, and its increased larger-scale wind turbine production serves as an optimal replacement for hydropower in a state where wind power can be strong. As hydropower generation has continued to fall over the past decade, wind power has doubled in the last four years alone to account for around 8% of California's total generation.

General Electric Company is a massive corporation, and it's unfortunately impossible to disaggregate exactly how much of its $149 billion in sales or $15 billion in net profit for fiscal 2014 originated in natural gas, wind, or California in general. But with back-end support for a "new normal" for California energy, an investment in GE continues to support the sort of forward-looking industrial innovation that has proven profitable from state to state and year to year.

3. NextEra Energy Inc
NextEra Energy Inc (NYSE:NEE) has a current 50% stake in the same world's largest solar plant that First Solar built, but it has more than one foot through California's energy diversification doorstep.

As the leading renewable energy utility in our nation, it should come as no surprise that California has welcomed NextEra Energy Inc with open arms. Of the company's six solar plants and 100 wind farms, California lays claim to  three solar and 10 wind facilities. 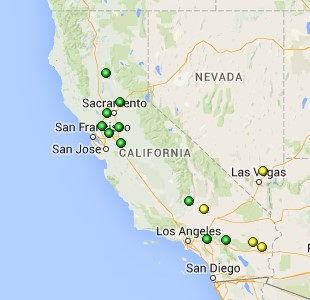 As a national electricity generator, NextEra Energy Inc will only make moves in California where it's advantageous. With friendly renewable energy regulation (e.g., the California Greenhouse Gas Regulation), relatively high electricity costs, and ample wind and solar opportunities in different parts of the state, hydropower's piddling output is another opportunity for NextEra Energy expansion.

Thinking ahead
No one can predict the future. But as the California drought has shown, investors who stick with the same strategy, regardless of how things change, may see their hard-earned dollars dry up. Be smart, be strategic, and invest in stocks poised to profit from progress.