Please ensure Javascript is enabled for purposes of website accessibility
Log In Help Join The Motley Fool
Free Article Join Over 1 Million Premium Members And Get More In-Depth Stock Guidance and Research
By Justin Loiseau - Apr 26, 2015 at 11:00AM

Investors, beware. Investing in these three companies could allow you to make money, save the world, and feel good all the while. Keep reading for the top three top stocks for fighting climate change.

For investors interested in growth, solar is still in early stages. At current contract prices, SolarCity estimates its market at $60 billion in electricity sales, a far cry from its current $255 million in revenue for fiscal 2014. And even for the states where SolarCity already has a presence, the company has installed rooftop solar panel kits on just 0.5% of all single-family housing units.

After a bit of an overly expectant boom and bust, solar companies and stocks are marching steadily forward. SolarCity Corp has found it especially useful to grow its market share through an innovative solar lease model, allowing customers to install a rooftop panel solar kit with zero money down.

SolarCity isn't everywhere, either. Its 16 state market presence is a strategic decision to grow in places where costs are relatively low, utility rates are relatively high, and the sun shines for solar. Distributed solar generation is a far cry from our current centralized and fossil fuel-centric system, but SolarCity Corp is taking us closer to a greener future, roof by roof.

SolarCity Corp is a top stock for fighting climate change in our homes, but Tesla Motors Inc (TSLA -2.05%) is taking the fight to the road. Approximately 32% of our nation's greenhouse gas pollutions come from power plants, but 28% come from transportation. With all-electric offerings, Tesla Motors is allowing us an alternative energy option for getting from point A to point B. 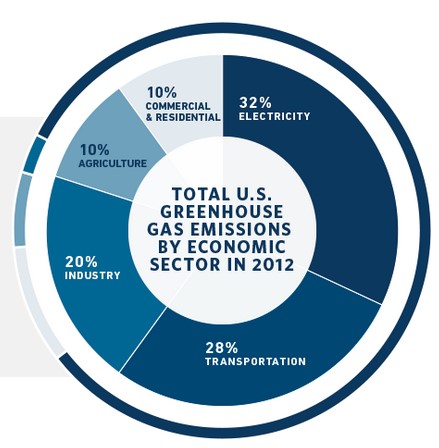 Despite its big press and monstrous $26 billion market cap, Tesla Motors Inc is still relatively small. The automaker announced earlier this month that its Q1 2015 unit sales amounted to 10,030 vehicles, a 55% increase over Q1 2014. That's peanuts compared to Ford's 235,929 sales in United States in March 2015 alone.

For investors interested in stocks to fight climate change, Tesla Motors is revolutionary -- but the revolution hasn't happened yet. The electricity that drives its vehicles still has to come from somewhere, and as we've seen with SolarCity Corp's penetration rates, renewable energy isn't everywhere. Drivers might still be powering their Tesla vehicles with dirty electricity generated from coal, oil, or natural gas.

But the automaker is up-front about its grades of greenification, and would-be owners can check their states' stats. The company also mentions rooftop solar as an easy way to environmentalize a Tesla's electricity consumption, and this investor wouldn't be surprised to see more formalized Tesla-SolarCity partnerships in the pipeline sometime soon.

SolarCity Corp and Tesla Motors Inc are stocks fighting climate change at an individual level, but there are also environmental investing opportunities in our infrastructure. NextEra Energy Inc (NEE -0.59%) is the undisputed utility leader in renewable energy.

Nowhere is this more evident than in Hawaii. Last December, NextEra Energy bought the utility that provides power to 95% of all residents. The $4.3 billion deal is expected to be accretive (positively affecting earnings per share) for investors starting next year, and NextEra Energy is currently filing a request with regulators to more than double the amount of solar power allowed on the grid. That could mean major cost savings for NextEra, as well as new sales opportunities for rooftop solar panel kit installers like SolarCity Corp.

Go green to make green?
In the wider investing world, there isn't exactly an overflow of environmental stock opportunities. But SolarCity Corp, Tesla Motors Inc, and NextEra Energy Inc are successful corporations banking on the fight against climate change. If you're ready to put your green behind the green movement, these three companies may be your pathway to profit.