Over in Britain, they've invented a space plane. 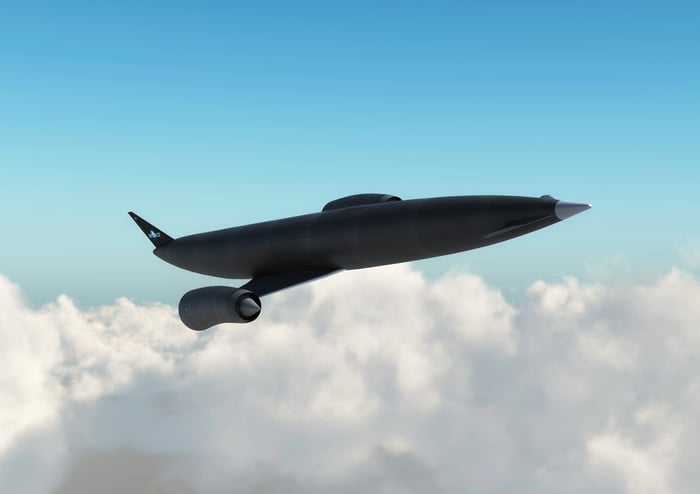 After surviving 100 successful test runs, a crucial 2012 components test, and a 2014 feasibility study by the European Space Agency, Reaction Engines' new SABRE (for "Synergistic Air-Breathing Rocket Engine") space plane is getting ready for prime time. Encouraged by the results, the British government recently designated SABRE a "high priority" technology project, and allocated $90 million to support it.

And now the U.S. Air Force is climbing on board as well.

Off we go, into the wild blue yonder...
Earlier this month, UK-based Reaction Engines confirmed that the United States' Air Force Research Laboratory has echoed Europe's confirmation of SABRE's feasibility. What's more, the Air Force plans to cooperate with Reaction Engines on developing the engine.

Now, the holy grail for the Air Force, as it is for Reaction Engines, for Boeing (NYSE:BA) and Lockheed Martin (NYSE:LMT) at the United Launch Alliance -- for everyone, really -- is development of what's called a "single-stage-to-orbit," or SSTO, technology. One engine that can take a spacecraft from ground to space, and then come back again.

There are multiple difficulties with this, of course, most of which center around two key facts: Earth's atmosphere is denser, and its gravity pull stronger, close to ground. These facts favor the use of airplanes over rockets when you're close to Earth and want to gain altitude. But the advantage shifts from airplanes toward rockets at higher altitudes (where there's less atmosphere to generate lift, but also less gravity to fight).

That's where SABRE comes in, as the driving force behind Reaction Engines' experimental SKYLON space plane concept. SKYLON is designed to take off from Earth like an airplane, using wings for lift and air to burn its fuel. SKYLON accelerates to Mach 5 speed while flying in airplane mode, and while doing so, the SABRE engine scoops up oxygen from the atmosphere, cooling and compressing the gas into liquid form, and then combining it with liquid hydrogen to burn later as fuel. Upon reaching high altitude, where the thin atmosphere gives no lift, SABRE burns this accumulated fuel to power its rockets -- lofting SKYLON into space.

A breakthrough in space tech
Emboldened by its twin endorsements from Europe and the U.S., Reaction Engines Director Sam Hutchison expressed in a press release a strong "conviction that the SABRE engine represents a potential breakthrough in propulsion that could lead to game changing space access and high speed flight capability." In short, it could turn out to be the holy grail that everyone is questing for.

SKYLON is of even more importance to investors. From our perspective, the new rocket engines that Boeing and Lockheed Martin are working on -- and even the "reusable rockets" that SpaceX is pioneering -- are incredibly cool tech. They open the possibility of cheaper, more frequent launches of satellites into orbit, and may even pave the way to eventual travel between planets.

These are long-term goals, however, and relate to infrequent launches. SKYLON's technology, in contrast, opens the promise of both making space launches more affordable and having more immediate commercial and consumer applications, in the form of hypersonic jet travel around the globe via the stratosphere.

London to Sydney in one hour flat?
Capable of reaching extreme altitudes (28 kilometers and up), where atmospheric drag is minimal, SKYLON is expected to reach speeds exceeding five times the speed of sound. That's already fast enough to enable commercial hypersonic passenger flights between the UK and Australia in just four hours. The space plane could go even faster, as fast as Mach 25, once it breaks above atmosphere.

If the technological hurdles can be overcome, we could be talking sub-one-hour travel between continents.

No wonder the Air Force is excited! Investors should be, too. This space plane has the potential to disrupt not only the established players in spaceflight -- Boeing, Lockheed, and even SpaceX -- this tech could literally change the face of the entire air travel industry, shifting hubs and spokes -- lock, stock, and barrel. So while we're still early days in the development of this technology, and SKYLON's first flight isn't expected to take place before 2019, the potential is enormous.

While it's true that pie-in-the-sky technologies are a dime a dozen in the stock market, those that have the endorsement of Europe's space agency, and of the U.S. Air Force as well, are significantly less common. This tech -- it's one to watch.

Introducing LAPCAT A2, a modified SKYLON. Could this space plane change how you travel around the globe? Photo source: Reaction Engines.