Please ensure Javascript is enabled for purposes of website accessibility
Log In Help Join The Motley Fool
Free Article
Join Nearly 1 Million Premium Members And Get More In-Depth Stock Guidance and Research
By Neha Chamaria – May 4, 2015 at 10:07AM

Why is Manitowoc stock holding strong despite wider first-quarter losses and a big drop in crane orders?

Manitowoc (MTW -0.28%) shares were up nearly 4% on April 30 despite the company reporting a dismal set of first-quarter numbers the previous day after market close. The construction and food equipment maker left no room for guesses on full-year guidance, as it already revised it just days before the earnings release.

The company reported a larger quarterly loss than the Street estimated. But surprisingly, the stock is holding strong. There are good reasons, however, for investors to remain cautious.

Big drop in crane orders, pressure building up
Manitowoc's Q1 net loss slipped to $8.4 million from $8.8 million a year ago, with revenue dropping 11.5% year over year. Both its businesses -- cranes and foodservice equipment -- reported double-digit percentage drops in revenue. What's worrisome is that sales from both divisions have been under pressure for some quarters now, and are clearly trending downward. 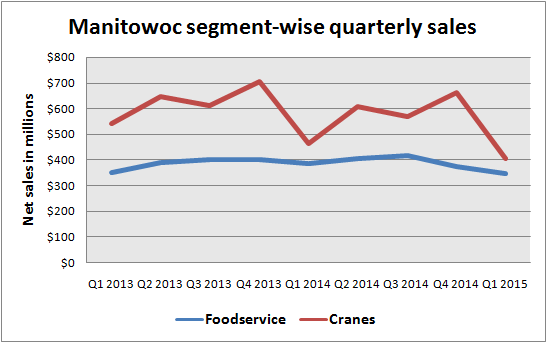 Manitowoc's Cranes business has always been choppy because of its cyclical nature. The recent oil-price slide only has made things worse, as demand from oil and gas companies for off-road cranes, especially rough-terrain and boom trucks, has dwindled. This is primarily why Manitowoc Q1 crane sales slumped 13% year over year, and operating margin came in at only 2.4% versus 4.3% a year ago. Worse yet, Manitowoc's Q1 crane orders declined a staggering 36% and 40% sequentially and year over year, respectively.

Foodservice hit by internal inefficiencies
Manitowoc's Q1 foodservice operating margin slipped, as well, dropping to 9.6% from 15.1% in the year-ago quarter. The company had a long list of factors to blame for lower sales and margins, including:

Of these, two are worth taking a deeper look at. First, lower spending by restaurants is a warning signal because Manitowoc's foodservice business depends a great deal on the health of the restaurant industry. If food chains don't expand, Manitowoc's foodservice equipment won't sell. While that's an uncontrollable factor, issues related to Kitchencare are internal, and thus, avoidable.

During its Q1 earnings call, CEO Glen E. Tellock mentioned "leadership changes, missteps in our call center operations, and parts stocking issues" as some of the problems plaguing Kitchencare. These factors point at management inefficiency.

While Manitowoc expects Kitchencare problems to wind down next quarter onward, and is also reporting strong demand for other products like ice machines and Convotherm 4 ovens, its revised full-year guidance suggests that the problems are far from over. From "mid single-digit percentage growth," Manitowoc now projects to end the year with flat foodservice revenue during 2014. It remains to be seen how the company will get to "improving mid-teens percentage" operating foodservice margin this year without any growth on the top line.

Separation on its way, but...
Perhaps the only reason why the market is excited despite Manitowoc's lackluster Q1 performance is this update in the earnings report: "Manitowoc remains on track regarding the separation of its Cranes and Foodservice businesses, which is anticipated to occur during the first quarter of 2016."

Manitowoc shares picked up momentum after the company announced its intention to separate its two businesses at the end of January following activist investor pressure: The stock is up nearly 6% since then, and investors have remained hooked to the company's announcements, looking for any updates about the separation that will see Manitowoc's two poles-apart businesses stand alone as independent companies.

But the event is still months away. In the meantime, Manitowoc needs to swiftly deal with issues, especially in foodservice, to be able to unlock value for shareholders once its businesses separate. Given the headwinds both divisions are facing right now, it's going to be a tough task for the company, and investors should remain cautious.