When rumors started circulating last year that Cisco Systems' (NASDAQ:CSCO) CEO was getting ready to hang up his cleats, the stock fell nearly 2% on an otherwise upbeat market day. John Chambers has been running the show since 1995, taking the networking specialist's annual sales from $70 million to $48 billion. Losing a leader of that magnitude can hurt.

The other shoe has dropped. On Monday, Chambers announced his retirement from Cisco's CEO post, which will happen on July 26. He'll still stick around as chairman of the board, continuing a role he's held since 2006. Chambers also named his replacement, and it's a longtime Cisco insider.

Cisco's next CEO will be Chuck Robbins, who currently serves as senior vice president of the company's worldwide operations. That happens to be exactly the title that Chambers held when he joined Cisco in 1991. I'll chalk that up to a weird coincidence rather than a strict hiring requirement, but Robbins most certainly walks strictly in his predecessor's footsteps.

In a blog post, the board's compensation and management development committee described a 16-month evaluation process, including several unnamed internal candidates and an open door for external superstars. But the committee decided early on that an internal hire would be best, to give the new CEO the best chance to hit the ground running.

So why did Cisco settle on this particular name?

"Chuck embodies all the characteristics and traits we had outlined initially for the ideal Cisco CEO," said selection committee member Rod McGeary in the blog post. "Taken together, his authentic leadership, cultural fit, technical acumen, and vision for Cisco, set Chuck apart from the balance of the candidates, both externally and internally."

In his own words, Chuck Robbins puts a big premium on human, relatable leaders. "Really, it is about the people at the end of the day," he said in a recent Cisco-produced video about leadership philosophies. He reportedly also does a mean version of Rapper's Delight, for what it's worth.

More to the point, Robbins also has a very optimistic view of Cisco's prospects. In a CNBC interview conducted four months ago -- in the final stretch of the CEO selection process -- Robbins outlined a return to double-digit revenue growth figures. That would be a return to numbers not seen since 2008: 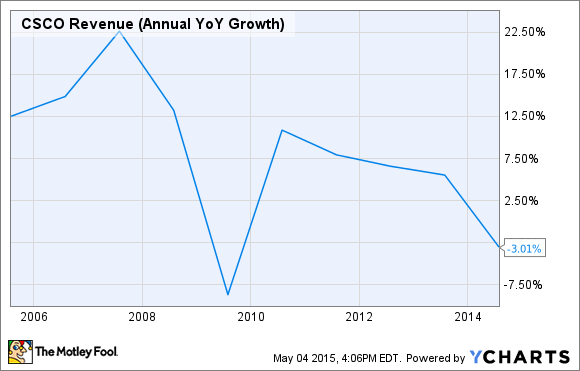 Robbins built that vision on exploding data networking demand in emerging economies, plus skyrocketing data needs for Internet service providers in more developed markets. Chiefly, mobile service providers in both of these market segments must expand their networks to keep pace with the increasingly data-hungry world we live in.

Robbins brought a clear and optimistic vision to the selection process and walked out a winner. Now we'll see if he can execute on that grand vision. The pieces are in place for a big success story, but it will take some doing to replace John Chambers without any major hiccups.

I'm usually not a fan of seeing longtime leaders hang around in revamped roles long after their farewell tickets have been stamped, since that influence can put a lid on truly new ideas and strategies. But Cisco isn't really in the market for a brand-new strategy right now and is probably best served by another healthy dose of John Chambers.

So I welcome the extended chairmanship with open arms this time. Chuck Robbins may indeed be the right man for this job, but he'll just do better with Chambers by his side for a few more years.

IBM CEO Ginni Rometty serves as living proof that not even longtime insiders hit the ground running every time. Then again, Sam Palmisano left her riding solo very quickly. This hand-off is different, and in a good way.