After market close on Wednesday, Tesla (TSLA -0.68%) reported better-than-expected first-quarter results. Beyond providing investors an update on the key figures for the quarter, Tesla commented on its progress on other important projects in the company's pipeline, including Tesla Energy, Model X , Model 3, and the Gigafactory.

The electric-car maker had already announced quarterly deliveries of about 10,000, up 56% from the year-ago quarter and easily exceeding its guidance for 9,500 deliveries.

Accelerating growth
One of the key takeaways from the results was the level of sales growth Tesla is reporting. The company's revenue and delivery growth rates are actually accelerating.

Tesla's non-GAAP revenue in Q1 was up 55% from the year-ago quarter. This rate is up significantly from the 44% year-over-year growth achieved in Q4. 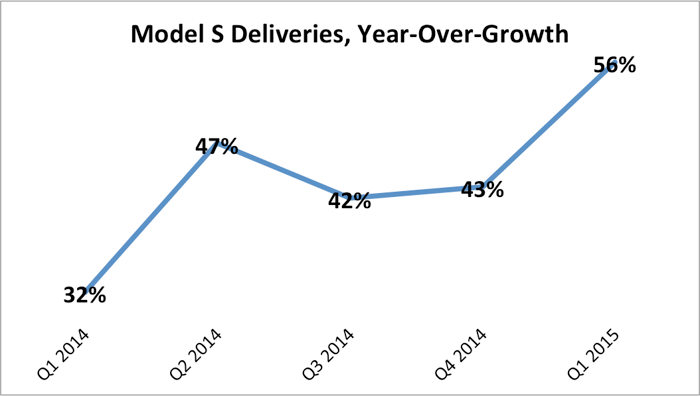 A few other important tidbits include:

At the time of this writing, shares were up 2% in after hours trading.