Please ensure Javascript is enabled for purposes of website accessibility
Log In Help Join The Motley Fool
Free Article Join Over 1 Million Premium Members And Get More In-Depth Stock Guidance and Research
By Jamal Carnette, CFA – May 8, 2015 at 2:28PM

Is it meaningful or just movement? 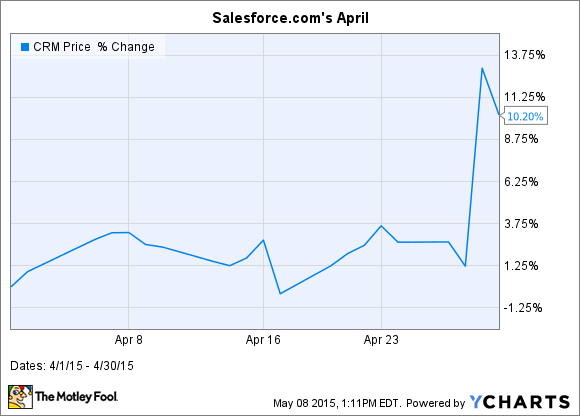 What: Shares of cloud-based customer relationship management specialist salesforce.com (CRM 0.73%) jumped 10% in April, according to S&P Capital IQ data, powered by a late-month 11.6% spike following a Bloomberg report that the company is working with financial advisors to field potential takeover offers.

So what: While Bloomberg did not name a potential suitor, many within the greater investing community pointed to a few possible buyers. Early reports centered on Oracle, IBM, and Microsoft. Given Salesforce's potential $50 billion-plus price tag, the largest takeover expense for a software company, there are a limited number of suitors with the financial wherewithal to complete such a transaction.

For Salesforce investors, this seems to be a trend. Last year, the stock briefly spiked amid rumors the company was a target for German competitor SAP. SAP denied these reports, then did so again following the latest rumors. Oracle also recently distanced itself from the acquisition rumors without outright denying its interest. More recently, Reuters cited unnamed insiders as shooting down Microsoft's interest.

Now what: Microsoft's reported reasoning sums up perhaps the biggest issue potential suitors would have with a Salesforce acquisition. As Reuters stated, "Microsoft considers Salesforce current market valuation expensive." While the cloud has become the catch-all buzzword in technology, with both Microsoft and Amazon.com recently surprising investors by reporting strong cloud-based revenue, these pre-takeover premium numbers are more than baked into a company trading at a price-to-sales ratio of nine and a PEG ratio of four. Not only are these numbers high, the PEG ratio estimates 27% growth per year -- a rather aggressive forecast.

Now that the company has been bid up by rumors of a buyout effort, any potential acquirer could experience a wrinkle of what's known as "the winner's curse," when the winning bid exceeds the value of the investment. Right now, Salesforce's huge rally seems to be mostly centered on an Oracle buyout -- and even they appear lukewarm on such as deal.