Please ensure Javascript is enabled for purposes of website accessibility
Log In Help Join The Motley Fool
Free Article
Join Nearly 1 Million Premium Members And Get More In-Depth Stock Guidance and Research
By Adam Galas – May 11, 2015 at 11:21AM

Big integrated oil companies like BP (BP 0.19%), ExxonMobil (XOM -1.83%), and Chevron (CVX -4.44%) are prized by income investors for their high and steadily growing yields, which, over the long term, helps them achieve market-beating total returns. 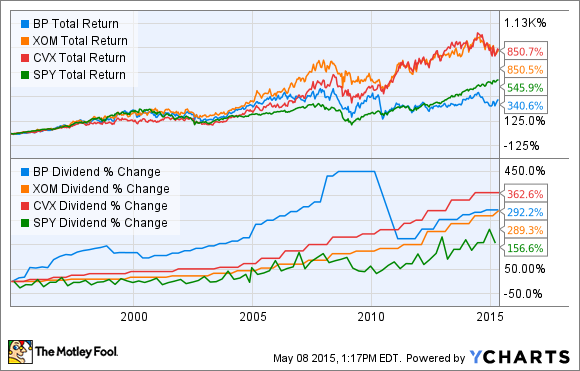 To help you better invest in integrated oil companies in this time of oil price uncertainty, let's look at three important metrics that help determine the long-term health and sustainability of earnings and dividend growth: the reserve replacement ratio, return on capital expended, and a declining share count.

Reserve replacement ratio: Long-term growth prospects
In order to be a long-term investor in big oil companies, you need to make sure that the companies will be around for decades, and won't run out of oil to produce, refine, and sell. The reserve replacement ratio is a great way to ensure that an oil company is growing its reserves faster than it's pumping them out of the ground, and likely be around long enough to become your very own dividend and capital-gain-compounding wealth machine.

Note that BP's ratio includes its Russian assets through its holding in Rosneft, but excludes its asset sales.

ROCE: A great industry profitability metric
Drilling for oil is a monstrously expensive endeavor, so investors need a way of ensuring that management is spending their capital efficiently to optimize their profitability instead of just throwing money around willy nilly in a fruitless attempt to grow at any price.

A wonderful capital efficiency metric for this is return on capital employed, or ROCE. A high ROCE typically indicates a company's management team is good at picking the most profitable growth opportunities, can complete projects on time and on budget, and minimizes wasteful spending, which can occur when oil prices have been high for several years. 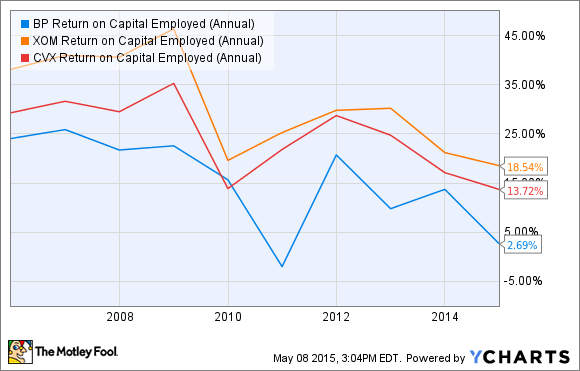 As this chart shows, Exxon has a long track record of having much better ROCE than its competitors -- especially BP, which has struggled in recent years not only with replacing its reserves, but also with declining capital efficiency. In recent years BP has been selling off large amounts of what it considers non-core assets -- around $35 billion worth -- and trim capital expenditures to focus on what management feels are the best and most potentially profitable projects in order to improve its ROCE -- and thus its free cash flow and dividend growth.

Meanwhile, Chevron is also planning on increasing its capital efficiency by scaling back capital expenditures by 13% in 2015 and selling off $15 billion in non-core assets by 2017. That's because Chevron has a very large amount of unproductive capital on its books -- around 40% , double its historical average -- which has been dragging down its ROCE. It's also planning to focus on key projects such as offshore drilling in the Gulf of Mexico, and its liquefied natural gas projects that should allow it to increase production by 21% during the next three years. 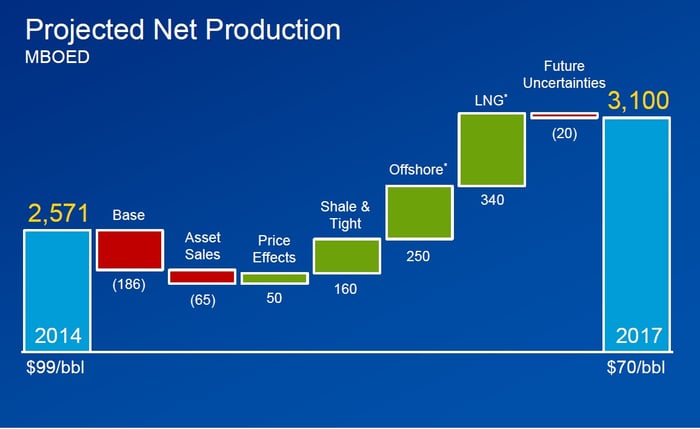 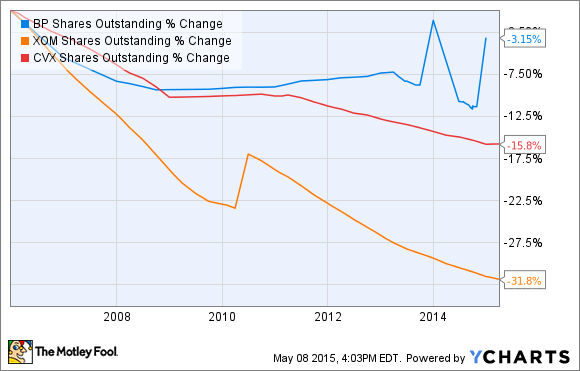 Once more, we see that Exxon leads its competitors when it comes to shrinking its long-term share count, while BP has struggled to buy back shares due to the uncertainty surrounding its potential financial liabilities after the 2010 Macondo oil spill in the Gulf of Mexico, a risk that is largely behind it now.

In order to continue buying back shares during the oil crash, Exxon has turned to the debt markets -- recently borrowing $8 billion, which it can do cheaply thanks to its AAA credit rating -- while Chevron recently suspended its buyback program in order to conserve cash while still rewarding investors with a potential dividend hike.

Takeaway: These three metrics help you keep a long-term focus on what matters in integrated oil stocks
When oil prices crash, it's easy to lose focus on what matters when it comes to investing in integrated oil companies. However, by focusing on the reserve replacement ratio, ROCE, a shrinking share count, and long-term dividend growth, investors can realign their thinking away from the chaotic carnival that is short-term quarterly earnings concerns, and back toward the fundamentals that make some big oil stocks long-term winners.

Adam Galas has no position in any stocks mentioned. The Motley Fool recommends Chevron. The Motley Fool owns shares of ExxonMobil. We Fools may not all hold the same opinions, but we all believe that considering a diverse range of insights makes us better investors. The Motley Fool has a disclosure policy.