There's no question the Ford Ranger and Dodge Dakota had a cult following, but that doesn't mean it makes business sense to bring those midsize trucks back. Here's why.

It's interesting how perception has changed in the last couple of years regarding midsize trucks. Once a segment left for dead in the U.S. automotive market, it's now the flavor of the month with the return of General Motors' (GM 4.03%) Chevrolet Colorado and GMC Canyon, the redesigned Toyota Tacoma, and now a Nissan and Mercedes-Benz partnership to develop their own midsize pickup by 2020.

Meanwhile, as Ford Motor Company (F 2.71%) and Fiat Chrysler Automobiles (FCAU) choose to sit on the sidelines, consumers want to know why the Ranger and Dakota aren't making a return. Turns out, the Ram Truck's design team doesn't believe a return to the midsize truck market makes much business sense, while Ford believes its global Ranger model is too big compared to the F-150 to sell here.

Slow death of the midsize truck
It doesn't take a long glance at the graph below to realize that the U.S. midsize truck segment has been all but dead for some time. 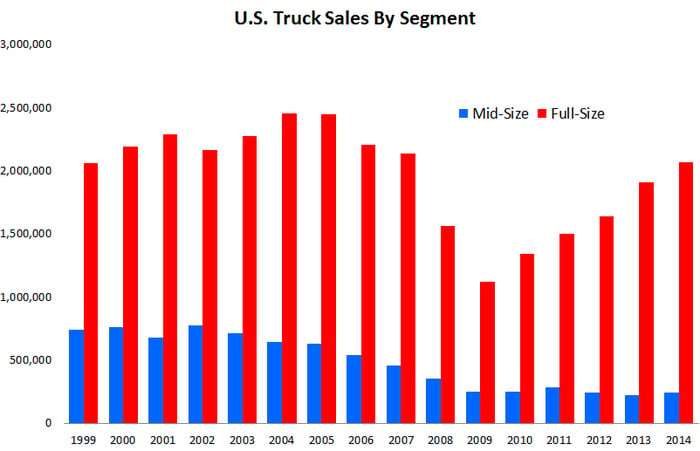 Over the last 15 years, the midsize segment at its best sold roughly one-third the trucks of its full-size counterpart. Even worse, after the recession took a dramatic toll on the entire automotive industry, full-size trucks have consistently rebounded, while the midsize segment has merely sputtered at the bottom of the barrel in terms of sales totals.

There's more to the story: Ram brand boss Bob Hegbloom says it's just too costly to create a truck with the necessary characteristics that would bring consumers back to the midsize truck market. Hegbloom believes for midsize pickups to return to their heyday, they would need to be considerably smaller than full-size trucks, less expensive, and less capable (to help bring the price tag down), and provide incredible fuel economy. Hegbloom told Automotive News in an interview: "When you look at those four factors, that's truly what a midsize pickup customer is looking for. I've been able to develop a strategy to come up with three of the four -- and even with what's out there on the market today, I haven't seen anyone who can deliver on all four."

It seems GM's revived midsize truck segment delivers some of those features. GM's Colorado is nearly a half-foot narrower than a full-size Silverado, and the largest Colorado -- the Crew Cab with the long bed -- is roughly 225 inches, which is 15 inches shorter than a comparable Silverado, according to The New York Times. Also, a comparable Silverado can cost about $7,000 -- or more -- more than a Colorado, depending on options.

However, because full-size trucks have considerably improved in fuel economy in recent years, it would be necessary for midsize trucks to get upward of 35 miles per gallon on the highway to convince consumers the size-down is worth the MPG gain -- for the record, the Colorado gets about 27 MPG.

Ultimately, for an automaker to make a midsize truck that delivers on all four of those attributes Hegbloom discussed relative to their full-size brethren, as automakers accomplished during the midsize-truck heyday, it would increase the technology required (think more efficient and costly engines and other technology), and thus increase the price tag of the midsize truck. Ford and FCA don't seem to believe it's cost-effective to manufacture a midsize truck that has the necessary features to sell well at this point in time. That's why Ford and FCA have focused on selling their popular full-size trucks only. While GM obviously disagrees, as it has brought back the Canyon and Colorado, it's yet to be determined if America's largest automaker can deliver a successful midsize truck and make worthwhile profits from it.

Is there a downside?
In the short term, Ford's and FCA's decision seems perfect: Focus on the full-size segment, which is surging and is the most profitable segment in the U.S. auto industry, and use the current midsize trucks overseas, where smaller trucks, like Ford's Ranger, sell well.

There is a potential long-term downside for Ford and FCA, though it's surely a strategic discussion the company executives have had. The auto industry in general is extremely competitive, and consumers are very brand-loyal. It's expensive in terms of advertising, marketing, and incentives to gain consumers from competitors. Oftentimes, a consumer for a midsize pickup is younger than those who buy a full-size truck and is potentially a first-time buyer. That means Ford and FCA could be missing out on the brand loyalty of a future full-size pickup owner as GM and Toyota scoop them up with cheaper midsize trucks and keep the consumers for their second -- potentially larger and more expensive -- purchase.

How will this all play out? Who knows, but we're sure to find out over the next five to 10 years. With big-time profits and competitors on both sides of the line, it's going to be a very costly decision for some automakers.