Pacific Investment Management Company, better known as PIMCO, is one of the largest investment management firms in the world, with more than $1.2 trillion in assets under management. Since its founding in 1971, PIMCO funds have been largely based on fixed-income investments in bonds.

For many years, the PIMCO Total Return Fund (NASDAQMUTFUND:PTTRX) was far and away the largest bond fund in the world, though it was recently passed by a Vanguard index-based bond fund when PIMCO co-founder and longtime fund manager Bill Gross left in late 2014.

Besides the Total Return Fund -- which you can learn more about here -- PIMCO manages a number of fixed-income and equity mutual funds, ETFs, and closed-end funds. Is one of them right for you? Let's take a closer look.

Is a bond fund the right fit for your needs?
Considering that bonds are the company's bread and butter, let's focus here. Interest rates have begun creeping up, but still remain well below historical averages, putting a damper on bond yields. However, it's important to remember that fixed-income investments are intended to offer more than just income, but also more stable capital value: 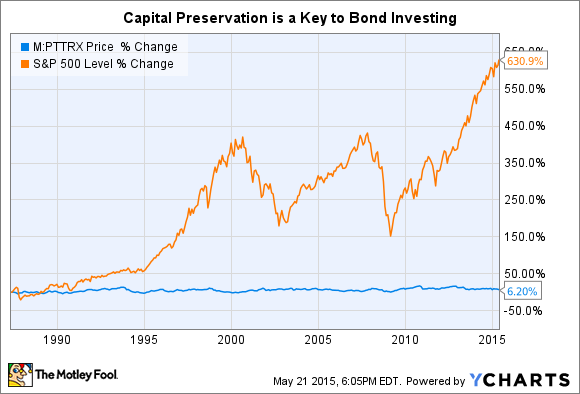 Essentially, what the chart above demonstrates is the fundamental difference between stocks and bonds. Stocks tend to gain value over time, while bonds usually stay relatively close to their redemption value. The reason why is simple: Companies can get bigger and more profitable, but a bond will only be worth its face value when its redemption date comes due. Stocks, of course, can also lose value, which is reflected in the steep drops in the orange line above.

Dividends for stocks and interest payments for bonds provide significant sources of return: 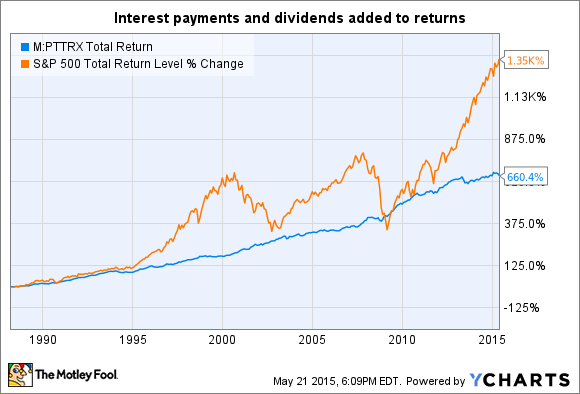 As you can see, interest and dividend payments significantly boost the returns for both bonds and stocks.

The key message? If you're putting away money for your retirement in a decade or more, especially if you're regularly contributing new money, then stocks are more likely to lead to better returns. Yes, you'll have periods where stocks lose a lot of value in a short period of time, but the market tends to recover very quickly, and inevitably, economic growth leads to growth. Bonds, on the other hand, are better for investing money that you're going to need in the short term.

However, bonds can gain and lose value, and this is especially true of bond funds, including PIMCO's.

How bonds lose value
While bonds are initially sold by the issuer for a face value, and the payout is fixed, like stocks, bonds are often sold on a secondary market. The biggest driver behind bond prices is interest rates. When interest rates rise, bond prices tend to fall, since newer issued bonds may offer higher yields, devaluing older bonds.

If you hold a bond all the way to its redemption date, you'll get back the full face value, but if you're investing in a bond fund, you'll never hold the bond itself, just a portion of the aggregate value of all the bonds held by that fund. In other words, the value of your investment in the bond fund will indeed go up or down, based on market prices for the bonds in the fund.

The price of admission
Furthermore, you also pay a premium to invest in bond funds versus picking your own bonds and buying them on your own. With PIMCO funds, the price you pay each year in management fees can vary from one fund to the next, and even by share class within the same fund.

In the Total Return Fund, for example, the lowest-cost "Institutional," "P," and "Admin" class of shares require $1 million or more invested to qualify, while "R" class shares, which are typically what you'll find in your 401(k) at work, can cost you twice as much per year in fees, significantly impacting your returns, especially with today's low interest rates:

And that doesn't factor in the sales charge, or "load" you'll pay, as much as a 3.75% for every  "A" class share, and 1% for every "C" class share you buy. In other words, "lower class" investors will pay significantly more to invest in a PIMCO fund.

Think about it this way. The Total Return Fund pays about 4.5% yield at recent prices. An Institutional class investor would pay about 10% of interest payments in management fees, while a "C" class investor (buying from a financial advisor) would be paying almost 36% of their potential income to PIMCO to run the fund. That's not even factoring in the sales charge to invest in the fund.

Buy bonds, not bond funds
There's some measure of risk with any investment, and PIMCO funds are no exception. Frankly, we're entering uncharted territory for bond funds. The prolonged drop in interest rates are beginning to reverse, which could lead to major headwinds for bond funds to simply preserve capital values.

If you're in the situation where you're going to need some of your nest egg in the next few years, but still want to gain some yield, your best bet is to buy bonds, CDs, or just savings -- but not bond funds. PIMCO has been one of the great names in bond funds for decades, but frankly, it looks like the risks far outweigh the benefits right now.

You can buy bonds on the secondary market through many discount brokers, and this will let you pick a bond with a term that matches your time horizon, meaning you'll be able to hold until redemption and get your capital back, plus interest. You may not be able to capture as high a level of yield as PIMCO funds, but you'll avoid the management fees, and almost completely eliminate the risk of capital losses.

PIMCO Funds: Are They Right for You? @themotleyfool #stocks $PTTRX Next Article
Current