Please ensure Javascript is enabled for purposes of website accessibility
Log In Help Join The Motley Fool
Free Article
Join Nearly 1 Million Premium Members And Get More In-Depth Stock Guidance and Research
By Daniel B. Kline – May 27, 2015 at 11:00AM

The category barely exists, but it could be the next big thing.

Before Apple (AAPL 2.44%) got into the fray, the wearables battle was more theoretical than real.

People might want smartwatches, fitness trackers, and other devices that fit the category, or the market may prove to be little more than a niche. Many of the major tech players had put a toe into the wearable waters, but none has had a commercial breakthrough.

The Apple Watch -- though it's still very early in the game -- appears to be the gamechanger -- a product with widespread public appeal that launches the category. That success could be a rising tide that raises the entire market, creating demand for devices from Microsoft (MSFT -2.36%), Google (GOOG -3.29%) (GOOGL -2.75%), and Samsung (NASDAQOTH: SSNLF).

It's very early in the lifespan of this entire category, and while it's possible wearables could be the next smartphones, it's also possible they burn bright, then flame out. Still, Apple has demonstrated that the public is at least open to the idea, and researchers at IDC predict the market will surge. That could be good news for the four aforementioned companies and their stocks.

Apple displays its watches in its retail stores, including the "Sport" variety.

How big will the wearables market be?
In 2014, just under 20 million wearables were shipped worldwide, according the IDC. The researcher expects that number to expand in 2015 and explode in the following years. The research company expects vendors will ship a total of 45.7 million units in 2015. By 2019, total shipment volumes are forecast to reach 126.1 million units, resulting in a five-year compound annual growth rate of 45.1%.

IDC expects that growth to be driven by smart wearables -- devices capable of running third-party applications.

"Smart wearables are about to take a major step forward with the launch of the Apple Watch this year," said Ramon Llamas, Research Manager with IDC's Wearables team. He continued:

The Apple Watch raises the profile of wearables in general, and there are many vendors and devices that are eager to share the spotlight. Basic wearables, meanwhile, will not disappear. In fact, we anticipate continued growth here as many segments of the market seek out simple, single-use wearable devices.

And, while Apple's play has been the most public (and the most successful so far), it is not the only company going after this market. 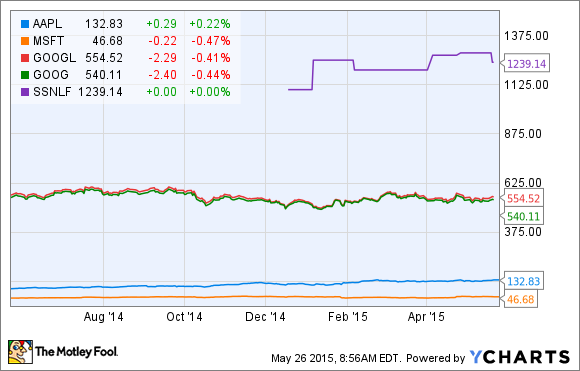 Wearables have not proven to be a major driver of stock price but that could change if the category takes off. Source: YCharts.

What is Microsoft doing
Microsoft may have the most potential of any company in this space because of its new universal Windows platform. When Windows 10 is launched, it will be the same operating system for PCs, tablets, phones, and even wearables like the company's band. This means an app could travel from your desktop to your tablet, to your phone, or to your wrist.

It's a an intriguing possibility because of the sheer amount of people who use Windows, but Microsoft still has to prove it can bring that audience from PCs to other devices. That has not happened yet with Windows Phone, but the universal apps store should make the idea of Windows users keeping all of their devices in the company's ecosystem more enticing.

Google has a different take
While all of the other players on this list have banked on wrist-worn devices, Google swung for the fences with its Glass headsets. The devices, which are essentially smart glasses, got a lot of attention, but never connected with the broader public. That led to the search giant shelving the existing version of the wearable, sending the concept back to the drawing board under Nest boss Tony Fadell.

It's too soon to know what product that will result in, but Google has huge upside in this market because it's not delivering yet another watch. Instead, by creating a heads-up display, the company is exploring a form factor that takes advantage of its strength in delivering step-by-step directions via GPS, as well as its ability to quickly provide information via search.

Samsung isn't Apple
Samsung has been aggressive in the wearables category, beating Apple to the punch with its line of watches. None have become consumer hits yet, but that may not be where Samsung has its success. The company could break through as an alternative to Apple.

If -- and I believe it's still a big if -- smartwatches become must-have devices, people using Android phones may want to get in on the action. That means buying wearables running Android, since Apple Watch is heavily dependent upon the iPhone. This creates a back door for Samsung to become a player though the company, as it is with phones, remains vulnerable to every other manufacturer that creates devices with the open-source Google OS.

Apple brings everyone up
Before the iPod, digital music players were a struggling novelty. Before iPhones, smartphones were limited to business people on BlackBerry handsets, and before the iPad, tablets were not a mass consumer thing. Apple creates categories but cannot keep other companies from eventually grabbing a big slice of those pies.

Apple Watch has started to make smartwatches a viable category. Since the company has never shown much interest in being all-inclusive or serving the bottom of the market when it comes to price, that leaves a door open for other players. Google, Microsoft, and Samsung could kick that door down, and all four stocks could rise based on this emerging market -- with Apple blazing the trail.