Don't look now, but the Space Shuttle is back in space.

Well, not the Space Shuttle, exactly. But a space shuttle of sorts.

Boeing's X-37B space drone. It's like a space shuttle -- but without the astronauts. Photo source: U.S. Air Force.

Specifically, the X-37B miniature space shuttle "drone," built by Boeing (NYSE:BA) and operated on behalf of the U.S. Air Force. A scaled-down version of the original Space Shuttle flown by actual human astronauts, the X-37B is operated entirely by robot. This military space shuttle is designed to launch into space atop a Lockheed Martin (NYSE:LMT) Atlas V rocket, there to orbit the Earth, experimenting with various top-secret military payloads -- on missions that can last nearly two years at a time.

What's inside the box?
As a rule, the government keeps hush-hush about the purposes of Air Force X-37B missions and the high-tech toys they carry. For example, we know almost nothing about what secret payload is contained within the X-37B this flight.

But honestly, that's neither here nor there. What we're really interested in today is not what's inside the X-37B... but what hitched a ride alongside it on the Atlas.

CubeSats satellites are smaller than a breadbox, and fit within a suitcase. Photo source: Wikimedia Commons.

OK. So, what's outside the box?
In addition to the military space shuttle itself, you see, the Atlas carried into orbit a payload of 10 small, four-inch cubed CubeSat satellites. As reported by CNET, these CubeSats will "test a variety of technologies, ranging from space-based Internet data relay to small-scale propulsion systems and communications." The really interesting part of this secondary payload, however, involves three of these CubeSats, which are linked together, and which will be testing a new form of space propulsion dubbed "LightSail."

According to the nonprofit Planetary Society, which is running the $4.3 million project, LightSail aims to deploy a 344-square-foot Mylar "solar sail," just 4.5 microns thick -- "one-fourth the thickness of an average trash bag." This first mission aims only to confirm that the CubeSat can successfully extend its booms and use them to unfurl the sail. A subsequent mission, scheduled for next year and traveling aboard a more powerful SpaceX Falcon Heavy rocket, will then test the actual operation of the sail.

What will LightSail do?
The idea behind solar sails in general, and LightSail in particular, involves a "solar energy" -- of sorts. The light emitted by the sun is actually composed of photons, which, while mass-less, do have both energy and momentum. When a photon strikes an object, such as a solar sail, it should impart its momentum to the sail, continuously accelerating the sail as more and more photons strike it. Thus, like a sailing vessel's sail, pushed by wind on Earth, a spaceship carrying a solar sail should be able to sail around the solar system, powered by nothing more than sunlight.

The greatest innovation in space travel since... space travel itself?
Here's why LightSail is so important: Sending a rocket-powered spaceship from Earth orbit to the moon takes an enormous amount of fuel. (Sending it to Mars would take an enormous-er amount.) Very roughly, an Earth-moon round-trip by the Saturn V rocket should require about 223,305 pounds of liquid hydrogen and liquid oxygen.

It costs money to get that fuel into orbit, though, so that it can power a spaceship on its trip to the Moon -- roughly $10,000 per pound of fuel. As a result, the fuel cost of an Earth-Moon round trip works out to about $2.2 billion.

But if a spaceship, once in orbit around the Earth, can simply unfurl a solar sail and glide to the moon without burning any fuel -- voila! That's an instant $2.2 billion savings for taxpayers.

Is there any way to invest in this?
Honestly, no. At the present time, Planetary Society's LightSail looks like little more than an R&D project: interesting. Potentially fascinating. Even potentially game-changing if we look a few decades out. But for the time being, there's not much of a way to invest in it.

That said, the more start-up companies like these that get interested in space travel, and throw their hats in the Saturnine rings as they work to make it more affordable, the more opportunities for investment that will emerge -- up to and including IPOs of the highest-profile players.

For investors looking for an opportunity to get in on the ground floor of space investing, it pays to pay attention. 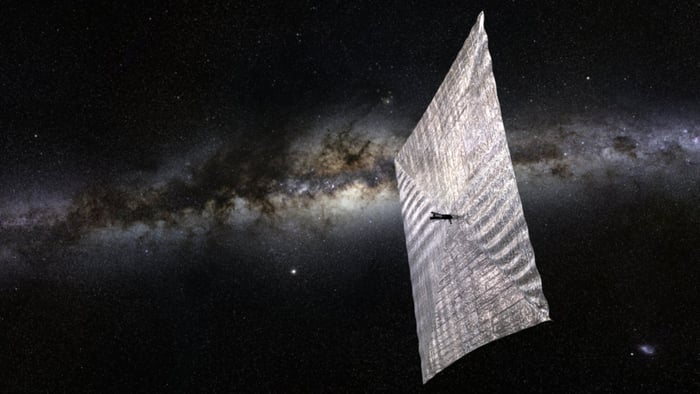