Three things that might be keeping Facebook's management awake at night. 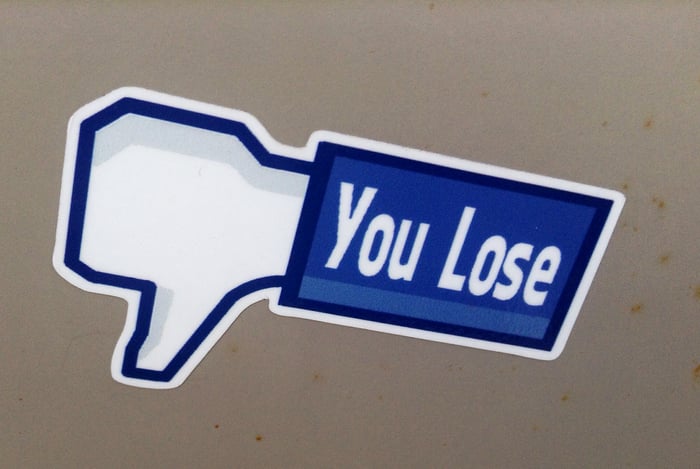 With nearly 1.5 billion monthly active users, it's hard to imagine a world where Facebook (META -0.74%) doesn't dominate the time we spend on the Internet. Last year, Facebook CEO Mark Zuckerberg said the average American user spends 40 minutes per day on the platform. Nonetheless, we've seen enough collapses of business giants (Internet-based and otherwise) to know that no company is immune to risks and competition.

Recently, we asked three of our contributors for reasons Facebook could fall apart. Here's what they had to say.

Tim Brugger  (stalled user growth): As long-term investors are well-aware, maintaining the status quo is simply not enough to drive a company's stock performance. Delivering ongoing results, and providing investors with a clear picture of where future growth will come from differentiates the "haves," from the "have-nots." To date, Facebook has done a nice job on both fronts.

Of the many positives from Facebook's Q1 earnings announcement, its rise to 1.44 billion monthly average users (or MAUs), up from the previous quarter's 1.39 billion, was near the top of the list. Facebook now boasts nearly half the world's connected population as a monthly user. There were an estimated 3 billion Internet users at the end of 2014, and almost half use Facebook at least monthly, and nearly a third every, single day.

As astonishing as Facebook's global user saturation is, it also raises the question: Where does it go from here? Facebook has multiple properties that should help it boost revenue in the coming few years -- WhatsApp, Instagram, Oculus Rift and Messenger for example -- but at some point, stagnant MAU growth could hit Facebook hard.

Why? Because investors have gotten used to the 42% jump in revenues Facebook posted last quarter, and its forecast for a 55% jump this year. Those kind of results breed sky-high expectations, but could Facebook deliver without continuing to grow an already inundated user market?

Zuckerberg's Internet.org initiative to bring connectivity to the world's underserved masses may end up being a lot more than a philanthropic endeavor. A few years down the road, connecting the planet could prove to be Facebook's saving grace.

Jeremy Bowman (declining popularity): With nearly 1.5 billion users, Facebook claims more members than any country in the world. The social network's popularity is hard to doubt, but its current size is no guarantee of future prosperity. Unlike Google(GOOGL -1.02%), for example, which benefits from a natural monopoly in search that makes it the best place to gather information on the Internet, whether Facebook is the best social network is entirely determined by the judgment of the user. There is no objective standard.

Past social networks dominated briefly before succumbing to the latest trend. Friendster, for example, peaked in 2003 when social media was still embryonic, but declined in part because it was unable to meet demand. MySpace followed, counting 76 million users at its peak in 2008, before being eclipsed by Facebook.

In a global and mobile sense, Facebook is much bigger than either of those two predecessors ever was, but fragmentation has become the new threat in social media as sites like LinkedIn, Twitter, and Pinterest have found a bounty of users by meeting social media needs that Facebook isn't.

Snapchat, known for its disappearing messages, for example, has become a particularly popular platform with American youth, claiming 100 million users who, the company says, view more than 2 billion videos a day, half the daily mobile video views Facebook claims with its much larger user base. If Facebook falls apart, we won't see the initial signs in its user numbers, but instead in user engagement, especially with its core constituency, young Americans who were the first users of the service a decade ago.

Those are Facebook's most valuable members because they are advertisers' most sought-after eyeballs. Young and living in a developing country, they not only set trends in social media, but deliver the most value. If Facebook loses this fickle bunch, its value proposition as a business becomes much weaker.

Adam Levy (shift in attention): Facebook isn't just competing with other social apps like Snapchat, Twitter, and Tumblr. It's competing with all media for attention. One of the biggest catalysts for growth at Facebook and any other social media company is the shift in ad dollars from television to mobile, which helped fuel an acceleration in ad revenue growth for Facebook in 2014.

As Facebook grows, however, it faces the challenge of becoming old media, which includes ad dollars shifting away from Facebook to whatever's new and hip. That could be a new mobile app, it could be a video game or game console or platform, or it could be some other new media that commands users attention. Facebook can't show as many ads if it doesn't have users' attention.

To its credit, Facebook recognizes this as one of its biggest risks, and management has done an excellent job working to prevent it. The first bullet point in the "Risk Factors" section of Facebook's 10-K is "users increasingly engage with other products or services."

The acquisitions of Instagram and WhatsApp help Facebook solidify its position on mobile. The acquisition of Oculus, however, is more telling of the moves Facebook is making to mitigate its biggest risk. If there's a platform shift to VR like there was to mobile, Facebook has already hedged its advertising business by owning the platform. Even if users just use VR for gaming or videos, which will reduce the amount of time available for browsing Facebook and uploading pictures to Instagram, Facebook still has a way to make money by owning the platform.

While Tim and Jeremy point to two very important risks Facebook faces, the underlying shift in attention that causes those problems is what Facebook must work to prevent. If the next popular platform, app, or medium isn't conducive to Facebook's business model, it could cause it to fall apart.