This company has it all -- but can it get it together?

Sales of Fiat Chrysler's overhauled Dodge Challenger are up 38% this year. But huge gaps remain in FCA's product portfolio, and it could be years before they're filled. Source: Fiat Chrysler Automobiles

The company I want to highlight today doesn't quite make that list. I'm hesitant to recommend it as a buy right now, because this company has a lot of things that need fixing -- and a couple of very big questions that need to be answered.

But it could become an intriguing investment in time. It's definitely a stock worth watching. Take a closer look.

This company offers it all: Good, bad, and ugly
It's hard to know what to make of Fiat Chrysler Automobiles (FCAU) these days.

On the one hand, its U.S. sales have boomed over the last few years, as buyers have flocked to its much-improved products. The market seems to like the stock: It's up about 40% so far this year. 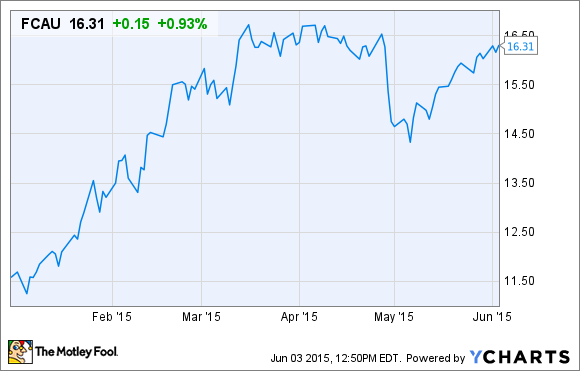 But on the other hand, there are a lot of things not to like about FCA right now.

The company's profits (and margins) are still too slim, especially in North America where rivals are generating big profits in market segments that are supposed to be FCA's strengths. That raises a big concern: Can the company make it through the next economic downturn without massive losses?

What's more, it's spending at a huge rate as it rushes to remake its global product portfolio -- and not just one of its brands, but several -- by 2018. That's all much-needed work: Several of FCA's key models are overdue for replacement, and there are critical holes in its portfolio that need filling, the sooner the better.

The factory that makes FCA's Chrysler 200 got a massive high-tech overhaul -- but other FCA factories are overdue for similar work. Source: Fiat Chrysler Automobiles

Worse, despite all that spending, FCA's quality ratings continue to trail just about all of its rivals'. Part of the problem: Several FCA factories need expensive modernization work to keep pace with rivals', but the money that could be spent on improving factories (and thus boosting quality) is being plowed into future product instead.

On top of all that -- as if that wasn't enough -- FCA CEO Sergio Marchionne seems to be conducting a bizarre public appeal for a merger partner. And according to a Reuters report this past week, he may have slowed down some of those critical new-model programs to make the company's financials look more appealing to a potential buyer.

It's enough to make one wonder if FCA is in danger of hitting the skids the next time the economy turns south.

Is it a buy, or is it doomed?
Those are all big concerns. But there's one very big reason to believe that this Italian-American mashup isn't doomed yet: So far, it has worked surprisingly well.

FCA's North American product lineup may lag rivals in quality, but it's a lot better than it was several years ago. New products have impressed critics with strong interiors, thoughtful features, and terrific driving dynamics. Sales have been strong -- up 9% in 2013 and 16% in 2014, and another 6% so far in 2015.

The former Chrysler Corporation has been profitable under FCA's benevolent guidance, even if those profits have been thinner than investors (and CEO Sergio Marchionne) would like. A lot of that has to do with the old Chrysler's strength in SUVs and pickups with its Jeep and Ram brands. It's those brands that could -- could -- make FCA attractive to a merger partner with a weaker position in trucks and SUVs. But so far, none of FCA's rivals have publicly acknowledged interest in a merger or acquisition.

The profit-margin problem will be addressed this year
Marchionne and his lieutenants have hinted that the company's leadership in the U.S. might have been overly generous with incentives in recent years. That may have been a factor in FCA's impressive U.S. sales growth, and it was certainly a factor in the company's thin profit margins in North America.

CFO Richard Palmer says that the company can close the gap by 2018. After FCA's first-quarter earnings report, he outlined a two-pronged plan that included a series of cost-reduction actions (mirroring actions that Ford and GM have been taking), along with a plan to improve the "mix" of products FCA offers.

The margin boost will help, but huge questions linger
That all sounds good. But a lot depends on those new-product programs. Will FCA be able to make a credible global luxury brand out of Alfa Romeo and Maserati? Will Chrysler get its much-needed small car? When will FCA's long-awaited hybrids start to arrive? Can the company finally boost its quality to match rivals', as General Motors has?

And one more big question: Will FCA end up merging with another automaker?

Those questions are why I say FCA is a stock to watch. If all goes as Marchionne has planned, this company could be a contender. But there are a lot of "ifs." Pop some popcorn and stay tuned.