Gilead Sciences might be on the verge of losing a large chunk of its hepatitis C drug revenues. Here's why.

Gilead Sciences (GILD -0.02%) looks, at least superficially, like a classic value stock. The biotech's first-quarter revenues grew by a noteworthy 52% year over year, its rising free cash flows led to a nice bump in the share buyback program and the initiation of a quarterly dividend, and finally, the stock is trading at a highly compressed forward price-to-earnings ratio relative to its peers: 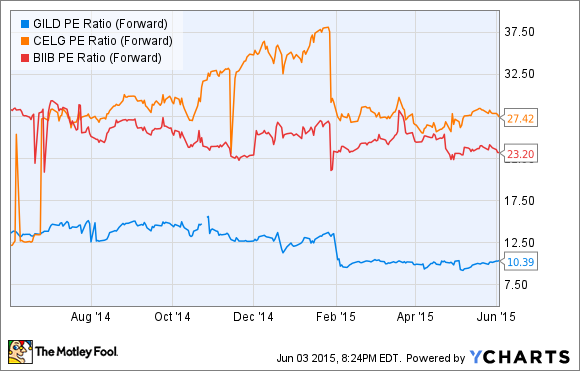 A deeper look at this top biotech, though, reveals some serious chinks in its armor. Put simply, Gilead may actually be a value trap, not a value stock. Here's why.

Gilead's moat in the hepatitis C market isn't built to last
One of most common ways to suss out a value trap is by examining a business' underlying competitive moat. A deep moat will keep competitors at bay after all, allowing a company to grow revenues in a sustainable manner.

Gilead's moat, however, appears to be rapidly filling up with sand, and its rivals are set to storm the castle, so to speak. The key issue to understand is that the dynamic hep C duo of Harvoni and Sovaldi combined to haul in 61% of total product sales in the first quarter, showing that this is an extremely important franchise to the biotech's growth prospects.

The launch of AbbVie's (ABBV -0.13%) Viekira Pak, though, marked the industry's first major attempt to cross into Gilead's largely uncontested territory. Although Viekira hasn't gotten off to a great start with only $231 million in first-quarter sales, AbbVie's management believes that prescriptions will start ramp up later in the year, putting it on track to capture close to 20% of the market.

Another threat to Gilead's domination is the potential launch of another rival medication from Merck & Co. (MRK -0.98%). Last week, Merck filed a New Drug Application with the Food and Drug Administration for its once-daily, single-tablet combo of grazoprevir and elbasvir for the treatment of adult patients with chronic hepatitis C virus genotypes 1, 4, and 6. Merck's once-daily single tablet offering is probably going to be a more efficient competitor than AbbVie's Viekira, given its far more favorable dosing regimen (one pill once a day versus three pills twice a day in some cases).

All told, the Street is expecting Gilead is lose 30% to 40% of the hep C market to competitors by 2017. And the introduction of yet another highly effective hep C drug is going to add to the substantial pricing pressures these companies are already facing from payers.

Key takeaways
Although hep C is not Gilead's only game, much of the valuation of the company is arguably based on the success of this franchise. Unfortunately, this success could turn out to be a flash in the pan, and that means its stock could be turning into a value trap. After all, the potent mixture of increasing competition and steep price declines are likely going to enact a serious toll on Gilead's revenues within a year. To short-circuit any drop-off in revenue, the biotech could consider doing something it's never done before -- namely buying a large company that already has a fair number of approved products.

With cash and cash equivalents heading toward the $20 billion mark, Gilead certainly has the dry powder necessary to execute a large acquisition. But perhaps not the will or expertise, especially when it comes to integrating a major commercial operation into the fold.

In light of its operating history and core areas of expertise, the most likely scenario is that Gilead will end up acquiring a small or midsized company with an intriguing clinical pipeline. While that's great for long-term growth, it means that investors might want to brace themselves for a substantial decline in earnings as competitors begin to breach Gilead's competitive moat in the hep C market.