Please ensure Javascript is enabled for purposes of website accessibility
Log In Help Join The Motley Fool
Free Article Join Over 1 Million Premium Members And Get More In-Depth Stock Guidance and Research
By Jason Hall - Jun 7, 2015 at 8:15AM

There's a difference between getting rich and financial independence.

Getting rich is part of the American dream, but it's something that most people will never attain.

For the baby boomers in the crowd, I'm sorry to break it to you: If you're not already rich, then it's probably not going to happen. But that doesn't mean you can't or won't be able to live comfortably in retirement. It simply means that many of you need to reset your expectations, and to better plan for the reality of a non-rich future.

Some scary statistics for baby boomers
According to Vanguard's How America Saves 2014, which provides statistics about the more than 3 million people who have a defined contribution retirement plan managed by Vanguard, the median 401(k) balance for those over 55 was less than $75,000 in 2013: 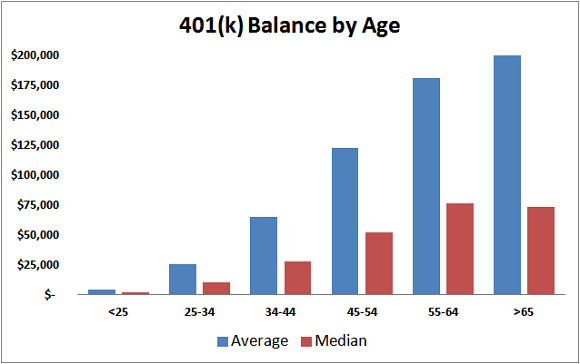 Yes -- the average balances were much higher, but those at the very high end skew the scale, and by a wide margin. Median is the number that rests in the middle of the population. In other words, half are above, and half below.

The role of Social Security
Social Security will play a major role in providing income to baby boomers, considering that in 2012 more than 85% of those over 65 received at least some benefit from the federal program. According to the Social Security Administration, the average monthly benefit paid to retired men was $1,451 in December 2013, and $1,134 to women. So a retired married couple would collect less than $2,600 per month.

The maximum Social Security benefit in 2015 at the full retirement age of 66 is $2,663 per month. But you would have needed very high taxable earnings in at least 35 of your working years to qualify for the maximum benefit. The more you made in your working years, the larger your benefit. Either way you slice it, however, Social Security won't make anyone rich, though it can bridge the gap between poverty and a comfortable retirement.

Pensions? Not for most
It's well known that the pension as a retirement income source is a dying animal, but most people might not realize that pensions were not the wonderful retirement source that everyone had in the past. In 2012, only about 9% of U.S. retirees drew income from a private pension, and only 8% from a government employee pension. The catch? Both of those numbers were actually up from 1962, when only 6% of retirees received a government pension and a mere 3% collected a private pension.

In reality, it's only been in the past few decades that people experienced a real retirement. As recently as early in the 20th century, many simply worked until they either were no longer physically capable or dead. It wasn't until the late 1940s that the average American man even lived to age 65.

Property value as a source of wealth
For years, the home has been seen a source of wealth and security for millions of Americans, but the financial crisis changed that story for many baby boomers. According to a 2014 study conducted by Harvard University's Joint Center for Housing Studies, more than 40% of those over 65 still carried a mortgage on their homes in 2010. This is essentially twice the percentage from the mid-1990s, less than two decades before. Homeowners between age 50 and 65 were also more likely to carry a mortgage as well: the percentage rose from 60% in 1992 to more than 70% by 2010.

The amount of mortgage debt Americans took on over the same period skyrocketed, though it has dropped as a result of all of the foreclosures during the recession: 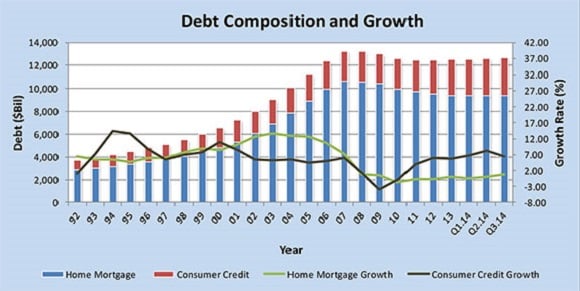 Factor in higher debt levels and property values that are still below pre-recession levels in many markets, and many baby boomers are stuck paying mortgages, and in some cases still owe more on their properties than they may be worth. This is reflected in the Harvard study, with the average loan-to-value having risen significantly for those over 50 in the past 20 years.

While home equity remains important, it has become a smaller percentage of people's net worth over the past 15 years. According to a U.S. Census Bureau study, the average percentage of net worth held in home equity declined from 30% in 2000 to 25% in 2011. This measures all persons, not just baby boomers, but the data above indicates that older Americans aren't immune from this shift -- particularly those that took equity out of their homes near the peak in 2006, only to find themselves underwater today.

What can you do?
Just because the statistics indicate you're not likely to get rich, you can still take steps to prepare for a quality retirement. After all, even if you're 60, you've probably got another 20 years ahead of you. So you need to make both some short-term and long-term decisions.

Now's an important time to take steps to protect yourself and your loved ones in the event of your death, especially if it would mean an end to your benefits from crucial pension or Social Security benefits. Life insurance industry expert and AccuQuote founder Byron Udell had the following to say on the subject:

Are you financially independent (translation: rich)? If not, you're not alone. Most people aren't. If you're not rich yet, you're probably never going to be. There's just NOT enough time left to get there. So what about your life insurance? When you die (and you WILL die), whether it's now, or 20 years from now, you still want to leave a chunk of money so your spouse doesn't have to live her golden years eating cat food. Want to hear the little known secret of how to WIN the game of life insurance?

It can be summed up in just six words: Die with your policy in force.

Udell added that he (at 56, he's in the same boat as many boomers) now pays for a whole-life policy, but based on his math, he could live to 100 and -- as long as he keeps paying the premium -- his family will make money when he dies. If you have family members who depend on income that requires you to be alive, you need to explore this option.

But what about when you're alive? You probably have more time to grow your nest egg than you think, and it doesn't require risky investments.

Looking at the long term, every dollar you put away today can grow value for you for years to come. If you're 50 today, you have plenty of time to put your money to work. Based on historical stock market averages, if you can invest an extra $5,000 per year for the next 15 years, you would have an extra $146,000 at age 65: 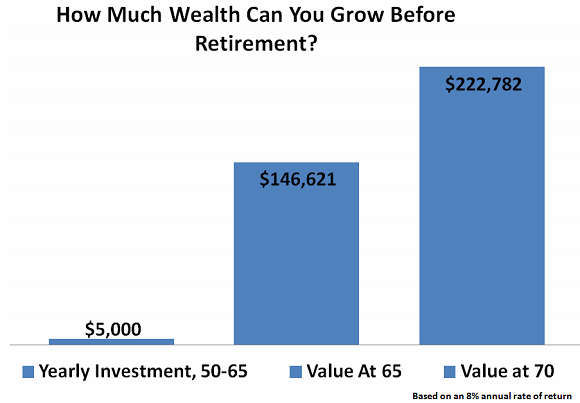 If you can leave it alone until 70, you could have more than $220,000 in added net worth based on historical stock market averages. That could make a significant difference in retirement.