Please ensure Javascript is enabled for purposes of website accessibility
Log In Help Join The Motley Fool
Free Article Join Over 1 Million Premium Members And Get More In-Depth Stock Guidance and Research
By Rich Smith - Jun 7, 2015 at 8:13AM

Why land a drone when you can "butterfly-net" it? And who will build the butterfly net?

Aircraft carriers such as the USS Nimitz can carry aircraft, helicopters, and drones on deck. But what about smaller warships? Photo: U.S. Navy?

DARPA -- the Defense Advanced Research Projects Agency -- dreams of building a 273-ship, drone-aircraft carrier Navy. It may never happen. But even if it doesn't, that's OK.

Last month, we told you about DARPA's "TERN" project. Like all things DoD, DARPA has a fondness for clever acronyms. This particular one denotes the Tactically Exploited Reconnaissance Node, a plan to outfit Navy warships, of almost any size, so that they can land and launch medium-sized unmanned aerial vehicles.

If DARPA succeeds, it will mean "drone" fighter planes traversing the ocean won't need an aircraft carrier to land on. They'll be able to land on pretty much any warship equipped with the TERN system -- even ships as small as a frigate. Abracadabra -- the U.S. Navy will go from having 10 full-size aircraft carriers, to potentially as many as 273 ad-hoc "aircraft carriers in a pinch."

Today, TERN is just an R&D project. While two companies, Northrop Grumman (NOC -0.74%) and AeroVironment (AVAV 3.87%), have made enough progress with TERN to permit them to move forward from "phase 1" to "phase 2" of the R&D, an actual, fully functional TERN system remains some years in the future.

And yet, as DARPA revealed last month, the R&D work is already bearing fruit, and has given rise to two technologies that the agency believes are worth developing. Specifically: 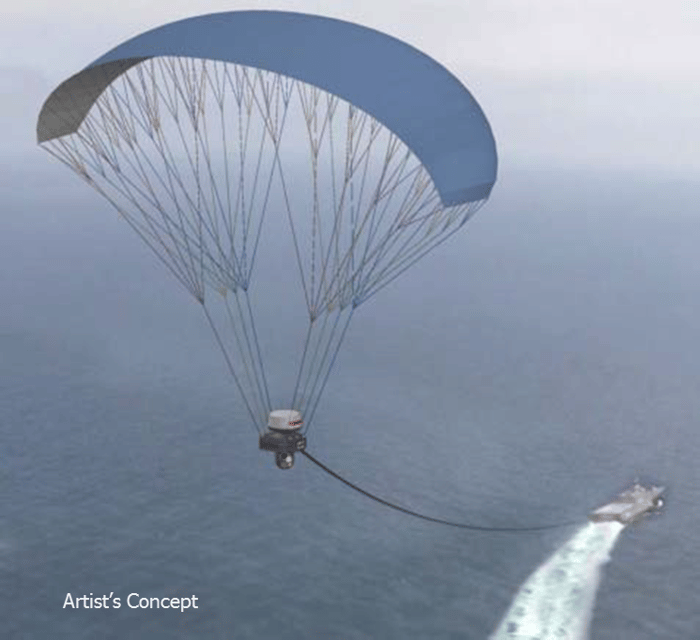 Go fly a kite
At least one of the contractors working on TERN apparently floated the idea of docking a drone in-flight with a hang-gliding "parafoil" docking station towed behind a warship, then (presumably) to be reeled in to land on board. The idea may or may not work for drones, but DARPA liked the towed parafoil idea all on its own.

They've dubbed it "TALONS," short for Towed Airborne Lift of Naval Systems, and are thinking that instead of a drone docking station, TALONS could carry a package of surveillance equipment, towed behind and above a ship. The effect of this would be to give a warship a super-tall "mast" that could, in DARPA's words, "greatly extend" the range and effectiveness of a ship's sensors. Installed on a ship's mast, sensors can't see much farther than the horizon of a curved Earth. Raise the "mast" 1,500 feet, though, and they'll see much farther.

SideArm could capture a drone in-flight, off the side of a moving warship. Photo: DARPA

A butterfly net for drones
Another idea that DARPA thinks has merit is called "SideArm." So far, this one seems most practicable for DARPA's original drone retrieval objective. It consists of a crane, mounted on a ship's deck, with an arm extending off to one side of the vessel and a docking station attached to this arm. A drone would fly into this station and be caught like a butterfly in a net. Presumably, the crane arm would then pivot and spin in circles, slowly decelerating the drone until it stopped completely, and could be hoisted on board.

DARPA illustrations of the concept suggest the agency sees this technology being adaptable to drone retrieval on land as well as at sea:

The SideArm concept could also be tweaked for mobile capture of drones on land. Photo: DARPA

What it means to investors
DARPA's TERN revelations last month give us little clue as to which of its two contractors, AeroVironment or Northrop Grumman, came up with which idea. DARPA gives no indication whatsoever as to which solution it prefers -- or whether it might ultimately choose a completely different technology for TERN.

The news does suggest, though, that even if AeroVironment, or Northrop Grumman, ultimately loses the TERN competition, it may not be a total loss. DARPA seems sufficiently impressed by both companies' technologies, to invest in their further development. Thus, with TERN or without, it appears both companies may have opened up new sources of revenue from a military increasingly reliant upon drones.

Needless to say, this is a bigger deal for AeroVironment , with less than $250 million in existing revenue streams (according to S&P Capital IQ data), than for Northrop (with $24 billion). But the big story here is that once again, we see Northrop Grumman and AeroVironment cementing their lead in the drone air forces of the future. If their rivals want to catch up, they'd better act quick -- before Northrop and AV "butterfly net" all the good drone contracts.