This Fool has held Qualcomm for over two years, and the mobile chip giant has lagged the broader market for the whole time. Is it time to move on?

As a huge advocate of the mobile revolution, I found that it simply made sense to invest in Qualcomm (QCOM 2.03%). After all, the company's technology powers all modern smartphones, while its chip business simultaneously provides many of the crucial components to those same devices.

Yet here I stand after holding shares for over two years, and the stock's performance has been rather disappointing to say the least. This is how Qualcomm has performed compared with the broader market throughout the duration of my ownership. 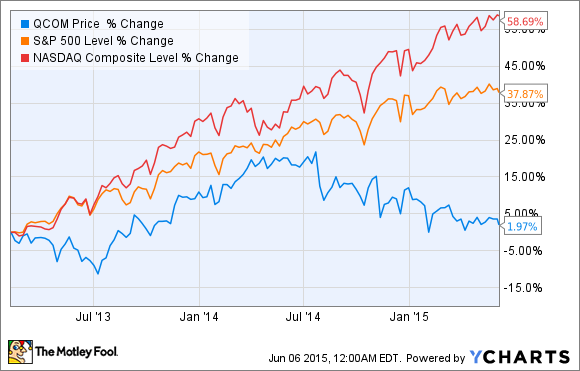 Not including dividends, my position has gained a paltry 2% while the S&P 500 and Nasdaq Composite marched steadily higher. Of course, past performance is no guarantee of future results, and if anything, underperforming shares can be an opportunity in disguise if the underlying business remains strong and the market is being myopic. But combined with the underperformance, I'm starting to see some potential longer-term cracks in Qualcomm's business that are making me question its future prospects. In fact, I've decided to sell Qualcomm once the Fool's trading policy permits.

On valuation
In some ways, Qualcomm represents the Intel (INTC 0.13%) of the mobile world. It was quite a symbolic milestone when Qualcomm's market cap overtook Intel's for the first time, although Intel has since reclaimed a higher valuation. However, if we look at how the two companies stack up right now, Qualcomm's premium valuation relative to Intel may not be fully justified.

Qualcomm trades at a premium relative to Intel's valuation metrics, yet fundamental metrics related to growth and profitability don't do much to justify the relative premium.

There are a couple of other royalty headwinds going forward. Since Qualcomm's royalty depends on the prices of phones, the continued hardware commoditization that's taking place will hurt Qualcomm's piece of the action. Additionally, Qualcomm has been having trouble collecting its royalties in China, believing that local OEMs were underreporting their shipments in order to skirt paying up.

None of this is to say that Qualcomm's royalty business is falling apart; the licensing business saw revenue jump 17% last quarter. Rather, my concern is just that there are some noteworthy challenges going forward.

On Apple, Samsung, and chips
At this point, the two dominant smartphone vendors, Apple and Samsung, comprise roughly half of Qualcomm's total revenue. That's a pretty big risk in terms of customer concentration, particularly as their combined influence has only grown over the years.

Looking longer term, there is a distinct possibility that both Apple and Samsung have strategic interests in moving away from Qualcomm whenever technologically feasible. Samsung just booted Qualcomm's applications processors out of the Galaxy S6, and while Qualcomm feels confident that it can win the South Korean conglomerate back over, it's far from a lock, and it intuitively makes sense that Samsung will want to continue using its own silicon. Apple predominantly buys cellular basebands from Qualcomm, but the Mac maker is probably working on building its own in-house solution as well.

Again, there is no imminent doom in these critical customer relationships, but at the same time it's quite conceivable that Apple and Samsung will slowly but surely continue their ongoing transitions toward in-house designs. Those transitions will undoubtedly take many years to play out, but I'd rather not wait around for it to happen.

Qualcomm has built an undeniably strong business, but a great company doesn't always equal a great stock (and vice versa). We Fools tend to look for stocks that have the potential to outperform the broader market in the long term, and I'm not so sure that Qualcomm can.