Cat and Joy Global have been hit hard by the spending slowdown in mining. Is it about to get worse?

Caterpillar (CAT -1.09%) and Joy Global (JOY) have watched their mining equipment sales plummet alongside capital spending in the industry. But was that just the first shoe to drop?

It's ugly out there
Miner BHP Billiton Ltd.'s (BHP -0.07%) sales have fallen each fiscal year since 2011, while peer Rio Tinto plc (RIO -0.33%) has seen its top line drop by about 20% over that span. That's just part of their troubles, with asset writedowns driven by falling commodity prices, asset sales, and more recently spinoff plans (at BHP) making things interesting, to say the least.

Miners are pulling back and shutting mines. Source: Ken Hawkins, via Wikimedia Commons.

The giant miners have used aggressive cost-cutting as one of their major tools to counter this broad commodity downturn. BHP trimmed its cash used in investing activities by more than 50% from fiscal 2012 to fiscal 2014. It's not done, either, cutting such spending 25% year over year in the first half of fiscal 2015. Rio, meanwhile, has reduced its spending in this segment from $18.2 billion in 2012 to just $6.5 billion last year.

What does this mean? Plans for expansion projects and new mines have been mothballed, which is why Caterpillar and Joy's mining equipment sales took a nose dive. Joy's top line is down by about 33% since 2012. At Caterpillar, which has a broader product portfolio, revenue has fallen by 16% or so, but mining has been the big soft spot. Essentially, with all those mining plans on hold, no one needs new mining equipment until the old stuff wears out.

Could it get worse?
One major reason Caterpillar bought Bucyrus to augment its mining offerings in 2011, just when commodity prices were peaking, was because mining equipment needs frequent service and replacement parts. These machines are run hard and things wear out. Thus, a regular part of the business for equipment manufacturers is the maintenance side, which provides a ballast against the ups and downs of the industry's equipment sales.

Only something might be different this time around. Take Joy Global's fiscal second-quarter results: Service sales fell 9% year over year and service bookings declined 15%. CEO Ted Doheny lamented that "customers further reduced capital expenditures and deferred maintenance on their mining equipment fleets." But what if the problem is deeper than that?

Industry watcher Timetric said last month that a survey of 100 mining executives showed that "60% of mines solely use OEMs for strategic parts," but for nonstrategic parts "27% of mines are using third-parties solely and 39% using a mix of OEMs and third-parties." The leading areas in which customers thought equipment makers needed to improve were parts and services. Timetric's Nez Guevara concluded, "Where issues regarding OEMs' after-sales service and the availability of parts have been identified, there is a greater potential for OEMs to lose market share to third-parties." 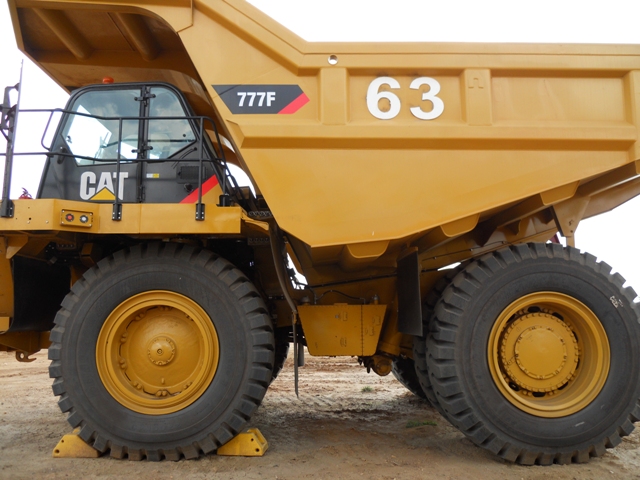 One of Cat's giant trucks. Source: Learstudent, via Wikimedia Commons.

Working to improve
This helps explain why Joy, despite the market downturn, has opened a new service facility in South America. Doheny explained, "We continue to invest in our service business to respond quickly and more efficiently to our customer's needs." With customers looking elsewhere for parts and services to cut costs, Joy may have no choice, since services accounted for over 70% of its revenues in the second quarter.

But that's not the only problem. As the mining industry cuts costs, equipment makers are lending a helping hand by creating more advanced equipment, such as Caterpillar's driverless trucks. This type of advanced vehicle saves money by allowing miners to optimize schedules and, more relevant here, reduce maintenance expenses. For example, driverless trucks at Rio Tinto's Hope Downs 4 mine have 14% higher utilization than similar mines it runs and cost 13% less to operate. So equipment makers are helping reduce their own aftermarket sales by making the products the industry wants.

As you watch mining equipment manufacturers like Cat and Joy, keep a close eye on their service businesses. This segment of their operations could end up weaker than they expect. Worse, the pain could come from the outside as miners look to keep cutting costs in a moribund commodity market and from within as the equipment makers provide improved machinery.