What: Shares of Avalanche Biotechnologies (NASDAQ:ADVM) lived up to their namesake today, cratering by over 50% on sky high volume. The stock has now fallen by nearly 70% from its 52-week highs and is trading close to its original IPO price of $17: 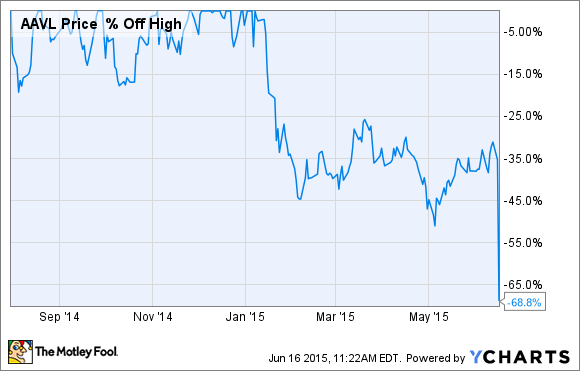 This drastic downside move was triggered by the top-line midstage data release for the biotech's highly anticipated gene therapy, AVA-101, for wet age-related macular degeneration, or wet AMD. The odd part is that AVA-101 met its primary endpoint of maintaining visual acuity with fewer anti-VEGF injections, compared to a control group.

So what: The problem is that the retinas of patients receiving AVA-101 thickened relative to those in the control group, casting doubt on the gene therapy's efficacy as a treatment for wet AMD. Simply put, one would expect the exact opposite result if AVA-101 was truly helping patients maintain their visual acuity.

Adding fuel to the fire, the significant result observed in the AVA-101 vs. the control group, in terms of visual performance, appears to be a consequence of patients in the control group losing their sight at an alarming rate. That brings up the distinct possibility that this finding was not due to a therapeutic effect imparted by AVA-101, but rather a marked imbalance in the experimental vs. control groups.

Now what: Avalanche is busy prepping to launch a larger midstage trial that should have adequate power to better assess AVA-101's ability to maintain visual acuity in wet AMD. Before then, however, Regeneron (NASDAQ:REGN) has to make a decision on whether to retain certain rights to AVA-101, per its research agreement with Avalanche.

As these initial midstage results paint a rather mixed picture for AVA-101's clinical profile, there's no guarantee that the biotech giant will ultimately pick up its option to license this gene therapy. And that would almost certainly mean that Avalanche would have to raise a significant amount of capital to move forward with the therapy's clinical trials. So, you may want to wait until this crucial business decision is in the books before trying to catch this cratering biotech.