The Emanuel AME Church in Charleston, South Carolina was the scene of a deadly shooting that claimed nine victims, reigniting the gun control debate that could lead to even higher gun sales. Photo: Howard Arnoff, Flickr.

Although the discussion is always bubbling just below the surface, providing an often unspoken though constant impetus to gun owners and enthusiasts to make further weapons purchases, two U.S. senators who were central to introducing restrictive legislation following the Newtown, Connecticut shootings in 2012 have indicated they're willing to take another shot at it.

Even if it's an uphill battle, as the politicians readily admit, the latest incident and talk of reviving new controls will likely spark another gun industry boom.

We've seen this script before
It was the run up to the 2008 presidential election and the fear that President Obama would initiate federal gun control that started the ball rolling. But it was only after Sandy Hook that fear of measures being passed would cause the FBI to eventually conduct an unprecedented number background checks on people wanting to make purchases. Gun manufacturers were subsequently swamped with orders.

It reached such a crescendo that Sturm, Ruger (NYSE:RGR) had to stop accepting new orders because it couldn't keep pace with the backlog of orders it already had. 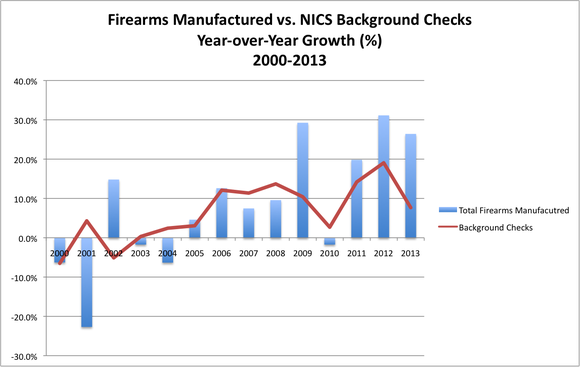 The Bureau of Alcohol, Tobacco, Firearms, and Explosives says Smith & Wesson produced 1.5 million firearms in 2013 (the most recent data available), Glock made 205,000 weapons, or 55% more than it did the year before, and even Colt, which just recently declared bankruptcy (How did that happen?), manufactured 35% more from one year to the next.

But the industry has been on the road to normalcy. Year to date, FBI background checks are down 5.6% from the year ago period and are down more than 12% from 2013.

Guns have growing support
Last month I noted the Pew Research Center found that for the first time in more than two decades, more people supported the rights of gun owners than in enacting stricter gun control legislation, with 57% believing guns do more to protect people from becoming crime victims as opposed to the 38% who say they're more a danger to personal safety.

That still posed a risk to the gun manufacturers, because without an immediate threat to their right to keep and bear arms there was no compelling reason to rush out and make a new purchase. But as I noted when pointing out the slowdown in background checks, there is always the chance a new tragedy befalls the country that would revive efforts to enact new laws.

Sadly, we've just had that moment come, but investors are waiting to see what that means for the two publicly traded gun makers. Ruger's stock is only 1% higher in the week following the Charleston shooting, and though Smith & Wesson's shares are up 6% during that same period, that probably has more to do with the gun maker's fiscal fourth quarter earnings report, which came out the day after the tragedy.

Is there a new normal?
Smith & Wesson said its operations were performing in line with its previously raised expectations as gun sales shifted back to seasonal patterns. Total sales were up 6% on the strength of its new accessories division as handgun sales were down around 3%, though concealed carry weapons have become especially popular with consumers.

High inventory at distributors had been a cause for concern previously, but sales finally caught up and inventory had been well below Smith & Wesson's target of being above eight weeks of sales. Now they've stocked up once more in anticipation of the usual September surge.

It will be a few weeks yet before we see whether there will be a spike in FBI background checks again, and whether any increase will be sustained. That likely will be determined by whether politicians think any new effort to introduce gun control legislation will be successful.

The kind of tragedy that occurred in South Carolina provides fodder for those who wish to see more restrictions on ownership imposed, and they heighten fear among gun owners and enthusiasts that lawful ownership will be swept away in the heat of the moment. There are powerful emotions on both sides of the debate, but they are also a forceful driver that spur people to buy a gun now before it's too late. And that could mean Smith & Wesson Holding, Sturm, Ruger, and the rest of the firearms industry could be entering boom times again.