Dividend stocks are an essential part of a portfolio for investors focused on the long term. After all, these stocks can amplify gains tremendously when investors use them to purchase more shares through dividend reinvestment plans.

As we all have to make tough investing choices, though, it can be difficult to decide which dividend payers to buy, especially among top dogs such as AbbVie (NYSE:ABBV) and Johnson & Johnson (NYSE:JNJ). These two healthcare companies have a well-earned reputation for increasing their dividends, as well as their top and bottom lines. So let's take a deeper look under the hood of these dividend aristocrats to suss out which stock offers the better long-term prospects.

AbbVie is pursuing a high-growth strategy
Unlike many of its peers in the large-cap dividend-stock universe, AbbVie is still very much a growth stock as well, reflecting management's strategy of producing double-digit revenue growth over the long term. Since being spun off from Abbott Laboratories in 2013, AbbVie has markedly outperformed the broader markets -- all the while increasing its dividend by a noteworthy 28%. 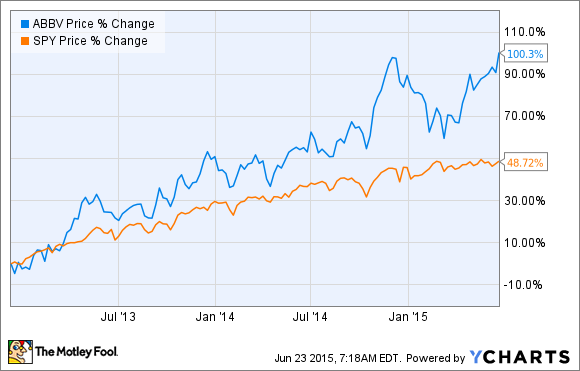 At current levels, AbbVie offers a dividend yield of 2.91%, making it a top dog among income-generating healthcare stocks. Unfortunately, there is some concern that this comparatively high yield might be unsustainable going forward. Because of the drugmaker's various investments in its clinical pipeline and product portfolio -- including its recent $21 billion acquisition of Pharmacyclics -- as a holistic strategy to stave off the pain of the loss of exclusivity for its flagship anti-inflammatory drug Humira in 2017, AbbVie's 12-month trailing payout ratio and cash flows have been heading in the wrong direction for a while now. 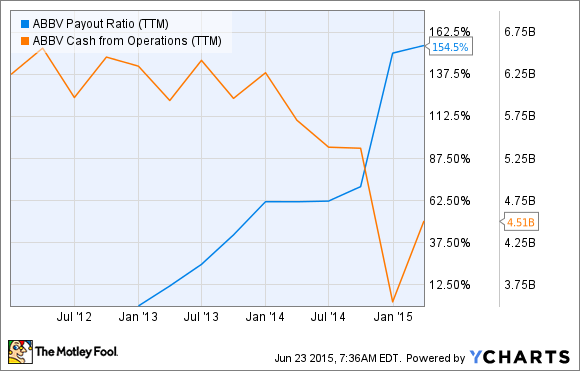 On the bright side, the company has been seeing stellar sales growth from multiple products, including Duodopa, Creon, Humira, and Synthroid. And the Pharmacyclics acquisition is expected to start boosting AbbVie's top and bottom lines starting in 2017. Management is also confident that it has a formidable defense in place against generic versions (that is, biosimilars) of Humira that could delay their eventual entry into the marketplace by several years, if not a decade. So there is a better than average chance that this somewhat disconcerting pattern between cash flow and the payout ratio could start to reverse course soon.

Johnson & Johnson has provided investors with decades of steady income and growth
Despite its massive market cap of $276 billion, J&J also has a long history of generating strong top- and bottom-line growth, as well as regularly increasing its dividend. Specifically, this healthcare stalwart has now posted 31 consecutive years of adjusted earnings growth and raised its dividend 53 years in a row.

The net result has been a reliable income-producing stock with a current yield of 3.01% that has essentially performed in line with the broader markets. In fact, J&J has outperformed most major indices in the past decade if you include its dividend in your total return on investment. 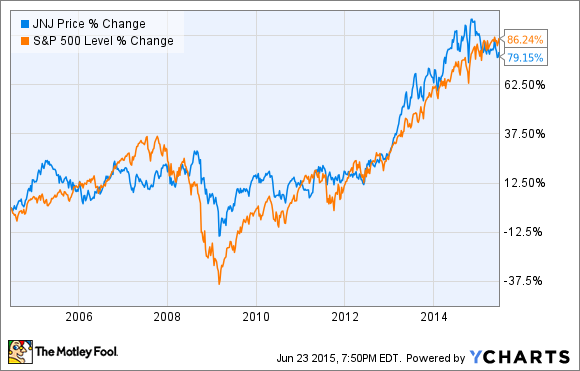 In recent times, J&J's growth and rising cash flows have been driven almost exclusively by its red-hot pharmaceutical division. Last year, pharmaceutical sales jumped by 15% to $32.3 billion compared with 2013, while the company's medical-device and consumer-healthcare segments posted low-single-digit drop-offs in sales.

However, J&J's pharmaceutical sales are expected to tip this year for a couple of reasons. First off, the introduction of Gilead Sciences' hepatitis C treatment Harvoni has basically made J&J's hep C drug, Olysio, obsolete. And then there's the threat of biosimilars to its arthritis blockbuster Remicade. Competitors in Europe are offering steep discounts of nearly 40% on their biosimilar, Remsima, which is apparently helping it to grab a larger share of the market than previously anticipated .

This dip in pharma sales looks like a temporary overhang, though, that shouldn't worry investors with a longer-term outlook. In the past five years, J&J has garnered the most new drug approvals with the Food and Drug Administration in the entire pharma industry, and its dominance should continue, with an estimated 12 novel drugs with blockbuster potential expected to come to market by 2019.

So which stock is the winner?
While AbbVie has trounced the broader markets since becoming an independent company, J&J has proved its ability to sustain top-notch value creation over multiple decades. That's why this is such a hard choice.

J&J nevertheless comes off as the winner because it simply has one of the best balance sheets in the industry, which has, in turn, given it the capability of funding numerous partnerships to bolster its clinical pipeline. AbbVie, by contrast, has taken on a lot of debt recently to fund the Pharmacyclics buyout, which could hamstring the drugmaker from pursuing additional deals down the line. Simply put, AbbVie has a far smaller margin of error on the clinical front than J&J to maintain its current levels of growth and dividend yield.