Spirit Airlines may be facing tough competition from the likes of Southwest Airlines, but nobody can really challenge its low costs.

Airline stocks have been good to investors in recent years, and none more so than Spirit Airlines (SAVE 2.90%). This high flyer went public at $12/share in 2011, only to soar sevenfold in the next few years, peaking at $85 in late 2014.

Since then, it's all been downhill. Spirit Airlines stock ended last week at $62.30, down more than 25% from its high. Increasing price competition from higher-service rivals, most notably Southwest Airlines (LUV 4.98%), has played a role in the stock's downfall. 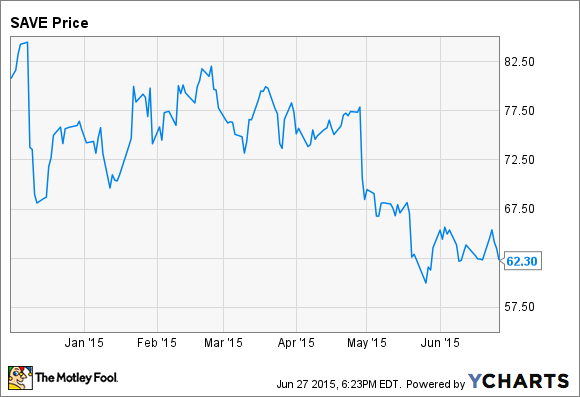 However, Spirit Airlines has far lower costs than any of its major rivals. Furthermore, its costs are poised to move significantly lower in the next few years, widening its cost advantage. This will help Spirit maintain its best-in-class profit margin while continuing to grow rapidly. As a result, I expect Spirit Airlines stock to regain its momentum within the next year.

Spirit hits the skids
Spirit's recent stock slide began last December, after the company cut its Q4 earnings guidance. At the time, Spirit noted a reduction in fares for close-in bookings, as well as overcapacity in the Dallas-Fort Worth market following Southwest Airlines' expansion at Dallas Love Field (which began in October 2014).

Together, these factors caused Spirit to lower its adjusted operating margin guidance from the original range of 18.5%-19.5% to 18%-19%, despite the benefit of lower-than-expected costs. This was particularly jarring to investors because Spirit had built up a long track record of regularly beating its margin guidance.

As it turned out, this warning was unnecessary -- Spirit Airlines ultimately reported an adjusted operating margin of 19.9% for Q4 2014. But the resulting earnings beat didn't earn Spirit any credit with Mr. Market, because it predicted even greater unit revenue pressure for Q1.

The benefit of low costs
Obviously, it would be better to see unit revenue growth than steep declines at Spirit Airlines. But investors seem to be forgetting that Spirit's unit costs are now lower than ever. Last quarter, Spirit's adjusted cost per available seat mile fell 19.2%. This was driven in part by Spirit's rapid growth, which is allowing it to spread fixed costs over more seats. However, lower fuel prices were also a huge help.

Furthermore, Spirit is just getting started on a new round of cost reductions. Entering 2015, Spirit's fleet was made up of 29 145-seat A319s, 34 178-seat A320s, and two 218-seat A321s. The larger planes have significantly lower unit costs. And Spirit is adding six more A321s in the second half of 2015, plus another 17 in the next two years. It is also starting to receive some next-generation (i.e. more fuel-efficient) A320neos later this year. Spirit's move away from the A319 toward larger and more fuel-efficient planes will significantly reduce its cost structure.

Spirit is also starting to finance most of its new planes with low-cost debt rather than leases. This is allowing it to save about $800,000 per plane annually, before tax. Lastly, new cabin designs may allow Spirit to put even more seats onto each plane in the future, pushing down unit costs even further.

Southwest can't touch this
Today, Spirit estimates that it has an approximate 14% unit cost advantage over Southwest Airlines. Its growth, the introduction of larger planes, and the move to owning rather than leasing planes will widen this gap. Southwest Airlines also faces potential cost creep, as its pilots want a big raise commensurate with the carrier's resurgent profitability.

In short, as aggressive as Southwest Airlines has been on fares in some markets, it can't push pricing far enough to cause any real problems for Spirit. Southwest Airlines undoubtedly offers a more enjoyable experience than Spirit, but there are plenty of consumers who are willing to put up with (almost) anything to get the cheapest price.

That's why, despite the competitive threat from Southwest, Spirit is on pace to grow earnings by nearly 50% this year, and analysts expect double-digit EPS growth again in 2016. A rapidly growing company with high margins like Spirit Airlines should not be trading for less than 12 times forward earnings -- yet it is. As investors become more comfortable that Spirit's profitability will remain intact, the stock is likely to take off again.