Biotech has been having another banner year, clobbering the broader markets by a wide margin: 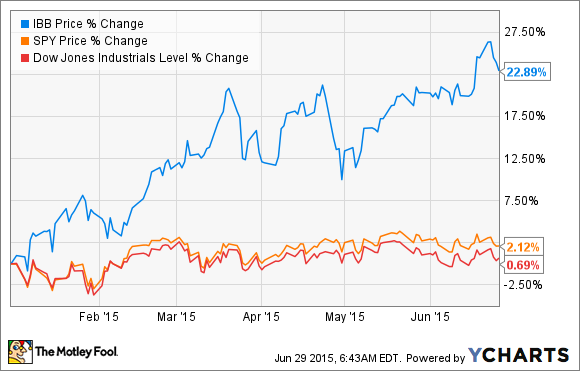 As world markets pullback in the wake of the Greek financial crisis, however, biotech may fall harder than other industries because of its massive run-up year to date. If so, I think this situation will create some compelling buying opportunities next month that might be too tempting to pass up. Specifically, I'm closely watching Exelixis, (NASDAQ:EXEL), Enanta Pharmaceuticals (NASDAQ:ENTA), and Isis Pharmaceuticals (NASDAQ:IONS) right now. Here's why.

Exelixis is expected to release a key clinical update in July
Exelixis had a bad 2014 after its flagship drug Cometriq failed to meet its primary endpoint as a treatment for advanced prostate cancer. But the stock could rebound in a major way this year with a positive top-line data release for its pivotal kidney cancer trial called METEOR. In a nutshell, Cometriq's ability to extend progression-free survival, or PFS, is being tested against the current standard of care, Afinitor, for renal cell carcinoma, or kidney cancer, in the second-line setting.

To date, Cometriq has been able to repeatedly beat out the current standard of care, in terms of improving PFS, for a handful of tumor types, which appears to be the drug's main clinical benefit (it doesn't work so well when it comes to extending overall survival for instance). History would thus suggest that Cometriq will upend Afinitor on the PFS measure in the METEOR trial, although anything can happen in the unpredictable world of clinical trials.

Given that even the second-line setting for kidney cancer is a billion dollar market and Exelixis is a tiny company at present, Cometriq wouldn't have to capture much of this market for this indication to be a major value driver for the company going forward.

Enanta is the forgotten name in the hepatitis C drug game
Hepatitis C drugmakers far and wide have been soaring this year, except Enanta Pharmaceuticals, the maker of ABT-450 -- a key component of AbbVie's (NYSE:ABBV) hep C cocktail Viekira Pak. Per its licensing agreement with AbbVie, Enanta garners milestone payments and royalties from the net sales of Viekira Pak. Unfortunately, the drug's comparatively sluggish initial launch, relative to competitors from Gilead Sciences and Bristol-Myers Squibb, has caused its share price to drop by almost 14% this year: 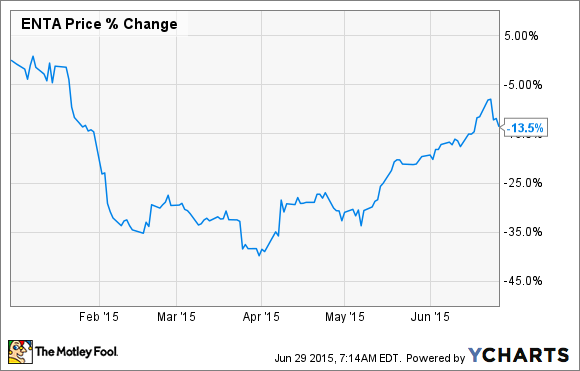 I believe this dip is only temporary, however. And any further declines should be viewed as a gift for long-term investors to pick up more shares. After all, Enanta should enjoy a monstrous uptick in earnings per share this year -- around 370% to be exact -- as Viekira Pak begins to penetrate additional markets such as Europe, Japan, and continues to gain favor on the formularies of public payers against Gilead's competing drug Harvoni. In fact, AbbVie's management believes Viekira Pak will reach its estimated sales total of around $2 billion before year's end, despite its slow start. All told, Enanta's shares are trading at a 12-month, trailing P/E ratio of around 7 at present, making it one of the cheapest stocks in all of biotech.

Isis Pharmaceuticals is deeply undervalued and getting cheaper
Isis has been one heck of a volatile stock throughout the biotech rally, but the overall trend has been up: 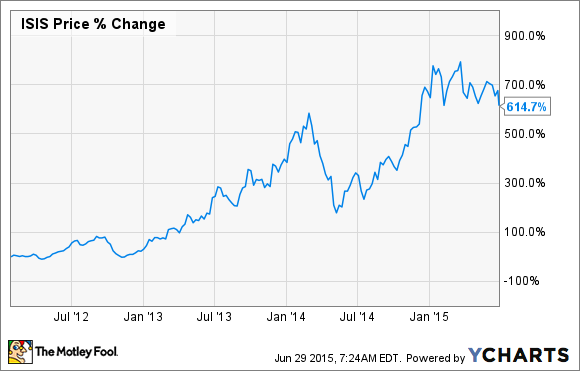 Isis is a complex beast of a biotech stock because of the mind-boggling breadth and depth of its antisense clinical pipeline. Although the company only has a single approved product in Kynamro, its pipeline sports several experimental potential blockbuster drugs. And their clinical progress has been impressive so far. So much so that Isis decided to break off its core lipid franchise, headlined by ISIS-APOCIIIRx, into a separate subsidiary called Akcea Therapeutics.

Going forward, Akcea will handle the clinical trials, regulatory submissions, and commercialization of these high profile clinical candidates, allowing Isis to focus on developing even more antisense products. Overall, Isis only has to hit on a few of its diverse array of experimental drugs -- especially in the high cholesterol drug space -- to make it a woefully undervalued drugmaker at current levels.

Are any of these biotechs buys right now?
I like all three of these names for the long haul because they have strong management teams and top-notch drug development platforms. That's why I'll gladly pick up shares in all three companies and stash them away in my portfolio if they drop because of the financial mess in Greece. If you're like me and don't mind some short-term volatility in exchange for long-term gains, you may want to consider doing the same.