Celgene Corp. (NASDAQ: CELG), a biopharmaceutical company focused on creating treatments for cancer and inflammatory diseases, announced this week that it would add $4 billion to its existing share repurchase program. This means the company now has the green light to repurchase $5.2 billion more of its stock on the open market.

Stock buybacks are one method by which companies return cash to their shareholders. When a company repurchases stock it lowers the total amount of shares outstanding, which makes each remaining shareholder own a slightly higher percentage of the company. When performed correctly, stock repurchases are a terrific way for management teams to reward long-term shareholders.

The key word in that last sentence is "correctly," as it is not uncommon for a company to repurchase shares when they are priced too high, which can actually destroy shareholder value. Thus, investors should dig into the details of any repurchase program announcement to determine whether it is likely to benefit shareholders.

I like to first look at the company valuation at the time of the announcement. Two simple metrics I consider in determining if a stock is cheap are the price-to-earnings ratio and the price-to-free cash flow ratio. These can be used as a simple guide to identify how much value the market is assigning to the company's current income. While these are not the only means of measuring value by any stretch, they can offer a rough guide. 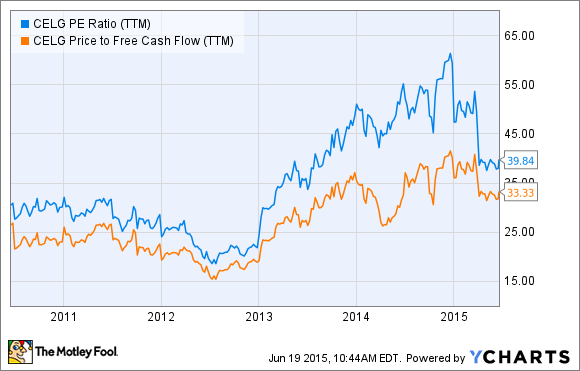 At 39 times trailing earnings, I have a hard time calling Celgene's stock cheap. That doesn't necessarily mean its repurchase program will destroy value, as Celgene has used buybacks successfully for several years to return cash to shareholders. Since 2009, the company has repurchased more than $12.3 billion of its shares, which has been great for investors as the stock has smashed the market over that time period. With this announcement, it appears Celgene's management feels its stock is cheap, and it wants to take advantage of the situation while it can.

Management probably feels that it's a good time to repurchase shares largely because they see the growth of their flagship multiple myeloma drug Revlimid continuing for years to come. Revlimid sales grew 16% in 2014 to almost $5 billion, and management is continuing to invest heavily in the drug to expand its use to treat other types of cancer as well. When you add in other fast growing drugs to the lineup such as cancer drugs Abraxane and Pomalyst/Imnovoid, as well as autoimmune drug Otezla, it's easy to understand why analysts are projecting near term growth rates over 20% per year. If Celgene can continue to grow that quickly, then repurchasing shares now may be a great long term move, even when measured against the stock's current high earning multiple.

Another metric I like to look at is the success of past share repurchases programs. Investors should ask if these programs are actually lowering the share count of the company over time, or if they are only being used to offset the effect of shares being given to employees. 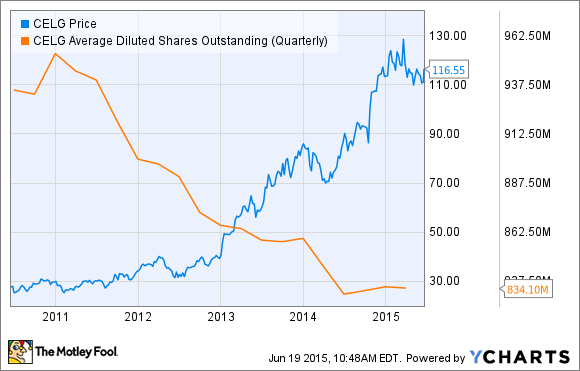 Celgene's stock buybacks appear to be doing the former, as the number of shares outstanding has fallen for several years now. Even better, the stock price has only risen over that time, which means previous buybacks were made at prices substantially lower than where the stock is trading now.

Another question to ask is whether the buyback amount make a difference when compared to the company's size. While $5.2 billion is a ton of money, Celgene currently sports a market cap of nearly $92 billion. Thus, even if it used every single bit of this authorization today, it would only bring down the share count by a little more than 5%. You also need to factor in how much the company is spending to compensate its employees with stock, which in effect offsets part of the purchase. In 2014, for example, the company spent $447 million to compensate employees with stock. I'm fine with that number, as the share count is still going down and employees deserve to be rewarded, but it's something to keep in mind.

The last thing I like to consider is how the company is funding the repurchase. I prefer that a stock repurchase program be executed with cash on hand, and when the company uses its free cash flow to fund the deal. As of March 31, Celgene had $7.3 billion in cash and equivalents on hand, so it appears to have enough in the bank, but it's important to note that the company also carried $6.3 billion in debt. Having more cash then debt is a good thing, so Celgene appears to be just fine on this measure for now.

Celgene's free cash flow, which is determined by taking cash from operations and subtracting capital expenditures, was just north of $2.6 billion in 2014, and yet the company spent $2.9 billion on repurchases during the year. To offset some of the difference and take advantage of cheap interest rates, the company borrowed more than $2.5 billion during the year. It appears this was a smart use of cash since interest rates are so low right now, but borrowing to fund repurchase programs can't go on forever.

Overall, I think Celgene investors should treat this announcement as a good thing, as the company has a good history of using its share repurchases wisely, is generating a ton of free cash flow, and is poised to grow strongly in the years ahead. Celgene is on my short list of companies that I'd like to purchase, so let's hope the stock pulls back some.