Please ensure Javascript is enabled for purposes of website accessibility
Log In Help Join The Motley Fool
Free Article Join Over 1 Million Premium Members And Get More In-Depth Stock Guidance and Research
By Jeremy Bowman - Jul 9, 2015 at 11:05AM

The better-burger chain dipped last month, but investors need not worry. Here's why.

What: Better-burger chain Habit Restaurants (HABT) was losing weight on the grill last month, falling 11% according to data from S&P Capital IQ. 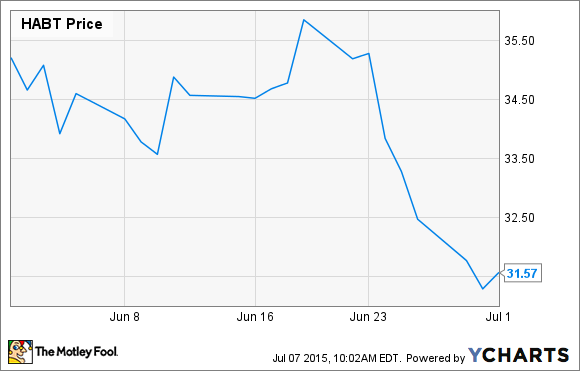 So what: As you can see from the chart above, the entirety of the loss came at the end of the month as the overall market was falling primarily on concerns about the crisis in Greece, with the S&P 500 dropping more than 2% during that period. As a high-priced recent IPO, Habit's swings tend to be more volatile than the market as a whole.

Though there was little news out about Habit during the last week of June, or for the whole month for that matter, there were two other events that likely contributed to the slide.

First, shares of Habit have moved in tandem with fellow better-burger chain Shake Shack, whoseshares reached a record high toward the end of May, at the same time Habit hit a recent peak, and have been falling since as the two companies bear a number of similarities, including that they are both recently public, momentum-driven, and carry high P/Es. 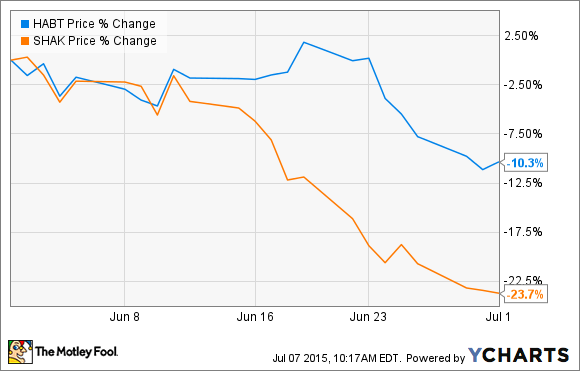 Secondly, two new restaurant IPOs came on the market in June, Wingstop and Fogo de Chao, and both popped in their debut. Each one likely drew some restaurant investors away from Habit and Shake Shack, and tellingly, both carry higher market caps than Habit.

Now what: Since the June decline was not based on any of Habit's fundamentals or news out of the company, it's hard to draw any strong conclusion from the stock's pullback. This is a stock with a high risk profile and little profits at the moment, so investors should expect some volatility, but more important to watch is the company's financial performance. With the chain sporting 13% comparable-store sales growth in its most recent quarter, it's clear the company is still on fire. If Habit can deliver more quarters like that one, the stock should move higher regardless of the machinations of the market or its rivals. Look for its next earnings report, which should be out around the end of July.

Jeremy Bowman owns shares of HABIT RESTAURANTS INC COM CL A. The Motley Fool has no position in any of the stocks mentioned. Try any of our Foolish newsletter services free for 30 days. We Fools may not all hold the same opinions, but we all believe that considering a diverse range of insights makes us better investors. The Motley Fool has a disclosure policy.