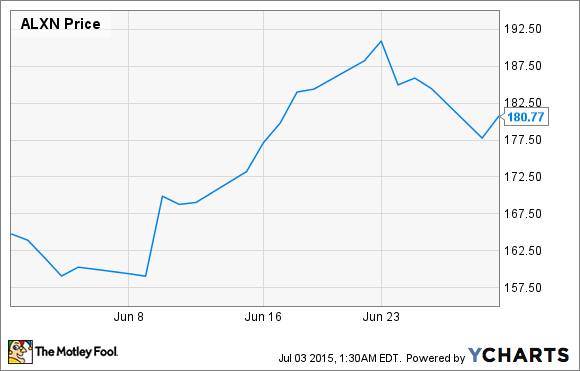 What: Shares of Alexion Pharmaceuticals (NASDAQ:ALXN), a biopharmaceutical company focused on developing therapies to treat extremely rare and potentially deadly diseases, surged by 10% in June (per S&P Capital IQ), as a result of closing a key acquisition, gaining a favorable opinion on two drugs in Europe, and thriving off of the satisfactory results of a competitor.

So what: As I like to call it, the "in your face" catalyst was the completion of Alexion's acquisition of Synageva BioPharma before the end of June.

Synageva's pipeline was defined by its research into lysosomal acid lipase deficiency, a rare genetic condition that can cause a buildup of lipids in vital organs, blood vessels, and tissues, potentially leading to progressive organ failure and possible death. Sebelipase alfa, a recombinant form of the human LAL enzyme, was Synageva's most promising project, and it could deliver in excess of $1 billion in peak annual sales if approved.

Alexion also received a positive opinion from Europe's Committee for Medicinal Products for Human Use, or CHMP, for Strensiq (asfotase alfa) as a long-term enzyme replacement therapy in patients with pediatric-onset hypophosphatasia, and Kanuma (sebelipase alfa) for LAL deficiency. The CHMP is Europe's equivalent of the Food and Drug Administration's review panels in the United States. This means the European Medicines Agency isn't required to follow the CHMP's positive recommendation for both drugs, but the chances are pretty good that it will.

Now what: Things continue to fall into place for Alexion Pharmaceuticals, which is benefiting from having very little competition, along with a focus on rare diseases that allow it to slap particularly high price tags on its drugs to ensure it recoups its drug research and development expenses.

Adding fuel to the flames, Alnylam Pharmaceuticals (NASDAQ:ALNY) reported early stage data for ALN-CC5, a drug being co-developed with Genzyme that targets paroxysmal nocturnal hemoglobinuria, or PNH, and atypical hemolytic uremic syndrome, or aHUS. Both are the sole FDA-approved indications for Soliris, Alexion's only marketed drug. Despite Alnylam reporting a 96% knockdown of serum C5 and a 92% inhibition of serum complement activity, Wall Street didn't seem particularly thrilled with the data. In other words, Alexion's dominance of PNH and aHUS seems safe for years to come.

Despite Alexion's already impressive run, there's little reason to believe it's anywhere near done. Between 2014 and 2018, revenue is expected to more than double from $2.23 billion to $4.9 billion, while earnings per share should practically double from the $5.21 reported in 2014 to nearly $10 per share in 2018 according to analyst estimates. In other words, we're looking at a P/E in 2018 of approximately 19, with a PEG ratio of less than one. I do wish the company's product portfolio was a bit more diverse beyond Soliris, but the growth figures speak for themselves.