Many investors look to a company's return on equity, or ROE, to gauge its overall profitability. Since ROE is calculated by dividing a company's net income by shareholder equity over a 12-month period, it can tell us how efficiently a company turns invested money into profit. Profitability varies across industries, so investors should only compare a company's ROE to its direct competitors.

The Internet retail sector generally isn't considered a high-margin one, due to the constant need to match competitors' prices. Amazon (NASDAQ:AMZN), for example, currently has a negative ROE due to its lack of profitability in three of its past four quarters. However, there are still several online retail stocks that have a solid return on equity.

Let's focus on two such stocks -- Petmed Express (NASDAQ:PETS) and eBay (NASDAQ:EBAY). Both companies have ROE ratios higher than the industry average for online retail stocks, which stood at 12% at the beginning of 2015. 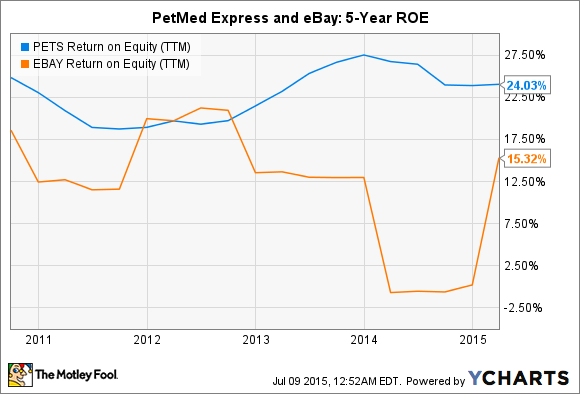 Petmed Express
Petmed Express, also known as 1-800-Petmeds, is the largest online pet pharmacy in America. Last year, it generated 80% of its sales from its website, with the remainder coming from sales through contract centers.

The company has an impressive ROE of 24%, but both its top and bottom lines have been under pressure. Last year, Petmed's revenue and net income respectively declined 1.7% and 2.9% annually, due to fierce competition from larger companies like Amazon, Wal-Mart, Petco, and Petsmart. Petmed Express doesn't have a major price advantage over those rivals, so going head-to-head against those competitors is weighing down its top and bottom lines.

However, Petmed has a few notable strengths. The average size of individual Petmed orders has been rising, due to a mix of higher-priced products and higher doses. Thanks to its first-mover advantage, it has a highly loyal customer base -- reorders accounted for 83% of its total sales last year. Last but not least, Petmed pays a hefty forward annual dividend yield of 4.2%, making it one of the top yielding e-commerce stocks on the market.

eBay
Over the past decade, eBay has fallen behind Amazon in terms of revenue growth. Yet eBay is much more profitable than Amazon. That's because eBay has a higher-margin business of connecting buyers to sellers and processing payments, while Amazon maintains a stock of items in its fulfillment centers. 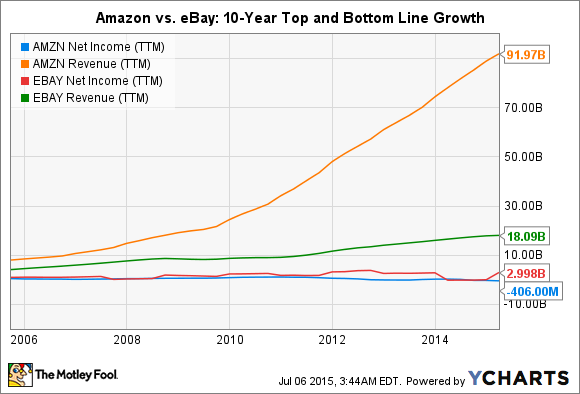 Last quarter, eBay reported net income of $626 million, compared to a net loss of $2.3 billion (caused by a tax charge on foreign earnings) in the prior year quarter. Yet the eBay marketplace's gross merchandise volume (GMV) -- the total value of all goods sold -- slid 2% annually due to a strong dollar, although active buyers climbed 8%.

Together, these two businesses have maintained eBay's ROE of 15.3%. It's unclear exactly how much of eBay's net income comes from PayPal, but PayPal's upcoming spinoff and IPO will likely reduce that figure considerably. Therefore, investors should wait to see PayPal's S-1 filing to see if it's a more profitable play than eBay.

Looking beyond ROE
Investors should remember that ROE is just one metric of a company's financial health, and should be used with other metrics -- like P/E, P/S, and free cash flow ratios -- to determine a company's growth potential. Moreover, some companies, like Amazon, have a low ROE due to constant investments in future growth. If those investments pay off, a short-term dip in profit might lead to stronger long-term growth.