Cancer immunotherapy vaccine maker Advaxis soared in the first-half of 2015 -- but can the good times continue? 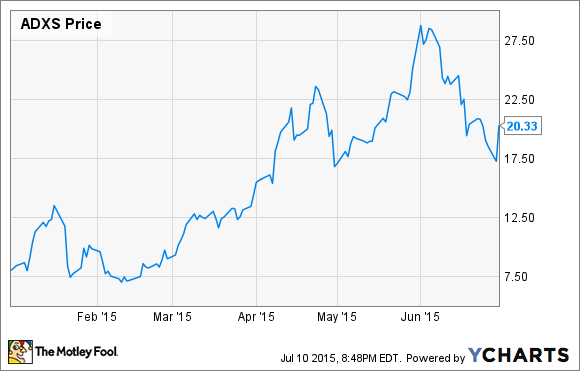 Shares of Advaxis (ADXS 8.21%), a clinical-stage biotech company focused on developing cancer immunotherapy vaccines, surged by 154% during the first six months of 2015. Backed out over the trailing 12-month period, Advaxis shares are up better than 500%!

The trio of reasons behind Advaxis' soaring stock price
What led to one of the top biotech performances in the first-half of 2015? It was actually a confluence of three factors propelling Advaxis higher.

First, Advaxis operates in arguably the hottest trend in drug development: cancer immunotherapy research. Cancer immunotherapies are vaccines designed to train your immune system to more effectively fight cancer. Some of these vaccines work by sending your T-cells, the locators and destroyers of cancer cells, into overdrive, while others simply aim to reduce the immunosuppressant quality that cancer cells use to avoid detection by the immune system.

Research firm Decision Resources anticipates the cancer immunotherapy market in the U.S. could grow by nearly 24% per year between 2012 and 2022 to roughly $9 billion. If so, this represents a big opportunity for Advaxis, which could potentially draw the attention of a larger suitor that's pining for growth.

Finally, there's clinical (and preclinical) data to back up Advaxis' move higher. In April, at the American Association for Cancer Research's annual meeting, Advaxis presented positive data on three studies. The first (and only) clinical-stage study was a phase 1 involving ADXS-HER2, which, not surprisingly, targets cancers with HER2-expression. ADXS-HER2 demonstrated delayed tumor progression and prolonged pet survival in canines with spontaneous osteosarcoma when combined with palliative radiation. The plan is to move this study into human trials this year as well.

Advaxis is also moving forward with late-stage enrollment for ADXS-HPV for patients with high-risk, locally advanced cervical cancer. The AIM2CERV trial is expected to be initiated before the end of the year and should yield data in the first-half of 2017. This is a big time catalyst that could validate Advaxis' drug development platform.

Clearly cancer vaccines are garnering a lot of attention at the moment, and if Advaxis can translate its preclinical success into success during human trials, then it could easily move higher. ADXS-HPV is particularly exciting given the vast array of possible indications for HPV-associated cancers, such as cervical and head and neck cancer. This alone could put it on the radar of blue-chip biotech companies and Big Pharma which have struggled to grow under the weight of patent expirations.

However, Advaxis is also wet behind the ears. It has no product currently on the market and will likely see its costs rise the coming years as it moves its phase 2 studies into more costly phase 3 studies. This means additional cash raises -- and potentially dilutive stock offerings -- could be in its future.

For instance, Advaxis ended the second quarter (April 30, 2015) with $46 million in cash and cash equivalents, all while its research and development expenses quadrupled year-over-year to $6.1 million. It announced a $53.2 million gross proceed cash raise via a dilutive common stock offering on April 30 which has the potential to fund its operations through 2017.

But, just because it has what appears to be a sufficient cash runway for two (or more) years, it doesn't mean Advaxis is anywhere near becoming profitable. Even with streamlined clinical studies, Advaxis may not see its first profitable quarter for another five or six years, by my estimates. This means investors need to take into account how a shrinking cash pile can affect Advaxis' overall valuation.

For the time being, everything is about safety -- and frankly that doesn't tell us much about whether or not Advaxis is deserving of its nearly $600 million valuation. Even if AIM2CERV is a success, we're probably not looking at study data being released before the first-half of 2017, and thus a drug launch not occurring until early to-mid 2018.

While Advaxis offers intriguing therapies to treat cervical and head and neck cancers, it could be entering a fairly crowded immunotherapy marketplace by 2018 and beyond. My suggestion? Stay away from this wild volatility until we have later-stage data we can actually use to our advantage.