For centuries the bulk of the global economy was centered on agriculture and the trading of goods. But that center shifted a couple hundred years ago thanks to the industrial revolution. It's a revolution that has continued to spread across the globe, but industrialization -- or the large-scale introduction of manufacturing into a society -- has really taken root in Asian economies over the last few decades.

As a result, these nations are rapidly developing and that development requires natural resources like natural gas, iron ore, and copper, which have fueled growth for commodity producers. While their growth rate has started to moderated a bit, which has had a big impact on producer profits, global industrialization is here to say. That said, right now times are tough in the commodities sector. While better days still lie ahead for commodity producers, investors might want to watch the sector from the sidelines until signs begin to emerge that growth is rebounding. Until that happens, here are three producers to watch while global industrialization take a bit of a breather.

As a major producer of aluminum, copper, coal, and iron ore, Rio Tinto is a one-stop shop for industrializing nations as it produces nearly all the key resources they need. But one of its core competencies is copper production, which is vitally important for industrialization. We see two great examples of why this is the case on the slide below. 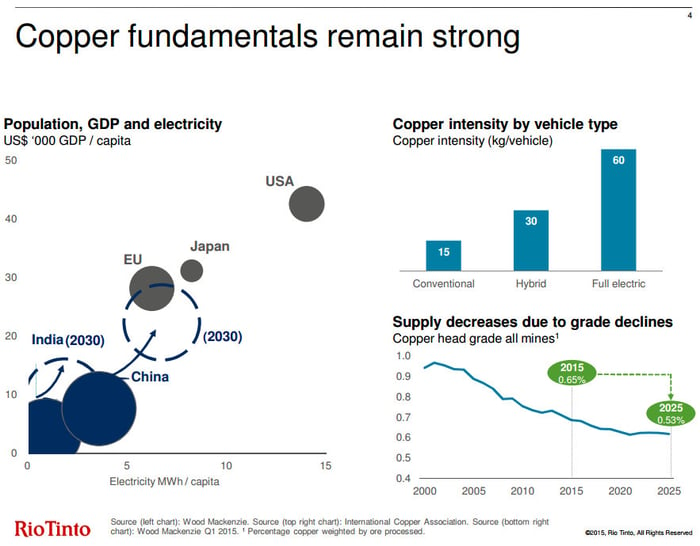 The first chart I want to draw your attention to is the one on the left. It's pointing out that as both China and India industrialize through 2030, each nation's per capita electricity needs will grow, which will lead to increased demand for copper from both countries. Meanwhile, as the slide in the right-hand corner suggests, copper intensity per vehicle grows as nations further industrialize from conventional gasoline-powered cars to all-electric vehicles. These trends bode well for copper producers like Rio Tinto, making it a great stock to watch as the globe continues to industrialize.

2. Vale (NYSE:VALE)
Like Rio Tinto, Vale produces many of the key natural resources needed for global industrialization. The company is actually in the process of expanding its production capacity across all four of its business segments so that it can capture a greater portion of future natural resource demand, as we can see on the slide below. 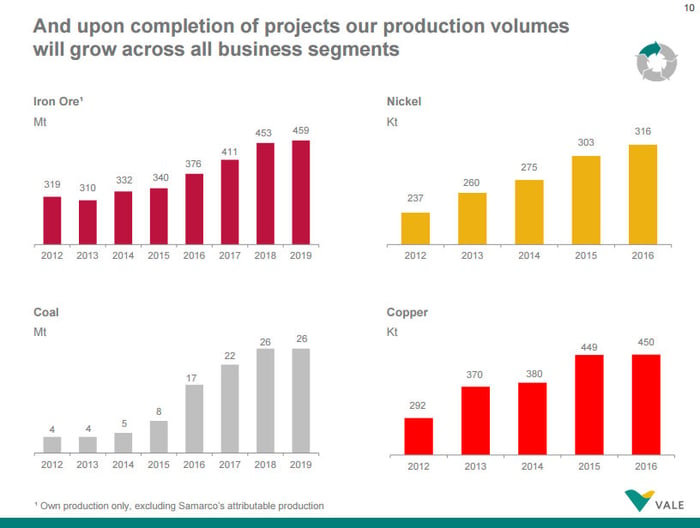 While the company is growing all four of its businesses, iron ore is what really drives the company as it's the largest iron ore producer in the world. At the moment demand for iron ore is starting to slow down as China, which is a key consumer of the commodity, is seeing its growth rate slowing. In fact, China's iron ore import growth rate is expected to slow significantly over the next few years. From 2000 to 2014, its import demand grew by a 20.4% compound annual rate, though that's partially due to the fact it was off of a very small base. That said, its growth rate is only expected to be 1.2% annually through the end of this decade. To overcome this slowdown Vale is focused on cutting its costs to improve margins. It's that focus on improving margins along with steady growth that make it a great stock to watch as the globe continues to industrialize.

3. Royal Dutch Shell (NYSE:RDS.A)(NYSE:RDS.B)
Another important fuel for industrialization is oil and gas. While demand for oil is expected to grow by about 0.8% per year through 2040, demand for natural gas is expected to be even stronger at 1.6% annually. That trend is actually right in Royal Dutch Shell's sweet spot as the company is focusing on growing its natural gas production as well as its LNG export capacity. Industrializing Asian nations are craving LNG as it's cleaner burning than coal and cheaper than oil. This is expected to push LNG demand in Asia from 186 mtpa in 2015 to 314 mtpa by 2025.

To position itself to capture this opportunity, Shell signed a deal to acquire rival BG Group for $70 billion in a move that would make it a world leader in LNG. Among BG Group's key LNG projects is the Queensland Curtis LNG project in Australia, which is right on Asia's doorstep. That's just one of many natural gas projects the two companies have in development as they look to fuel growing demand for natural gas by rapidly industrializing nations making Shell a great stock to watch.

Investor takeaway
While the growth rate of industrializing nations like India and China have slowed in recent years, both countries are still growing. That is expected to drive continued demand growth for key commodities like copper, iron ore, and natural gas, which is why Rio Tinto, Royal Dutch Shell, and Vale are great stocks to watch in the years ahead.