Netflix (NASDAQ:NFLX) last week disclosed dozens of key data points about its streaming video business through its earnings release, shareholder letter, and conference call. But most of the investor focus went to just one statistic: 3.3 million new subscribers.

It's easy to see why Wall Street loved that result. Member growth was far above management's forecast of 2.5 million additions. It also nearly doubled the gains that Netflix booked a year ago. 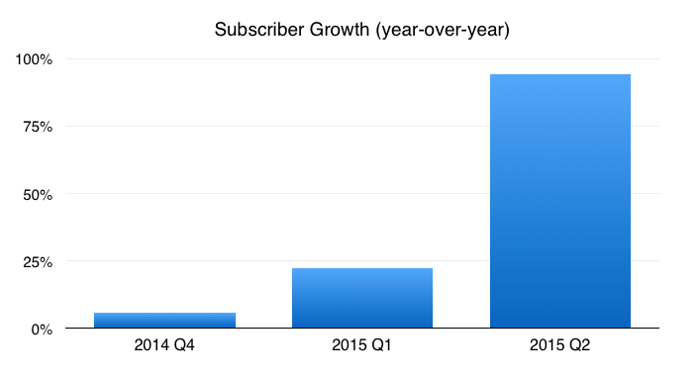 Percentage growth of global subscriber base from the prior year period. Source: Netflix financial filings.

On pace to add more members in the U.S this year than in 2014, the company just might achieve CEO Reed Hastings' long-term goal of as many as 90 million domestic subscribers.

Still, it wasn't all good news for investors in this report. Here are two negative trends from last week's announcement for shareholders to keep in mind.

Great content, great costs
Netflix is shifting away from buying widely available content, and instead focusing on snatching up exclusive and original entertainment. This change is the biggest driver behind the souped-up subscriber growth. Here's how management sums up the benefits: "[Original and exclusive content] differentiates our service, drives enjoyment for existing members, and helps motivate consumers to join Netflix."

But there's a big financial trade-off here. Exclusive shows are more expensive and original series require cash upfront. These trends push content spending higher while dragging cash flow down. Netflix now has $10 billion of streaming content obligations on the books, up from $7.7 last year. And its free cash flow trend over the past four quarters has been: -$74 million, -$78 million, -$163 million, -$229 million. 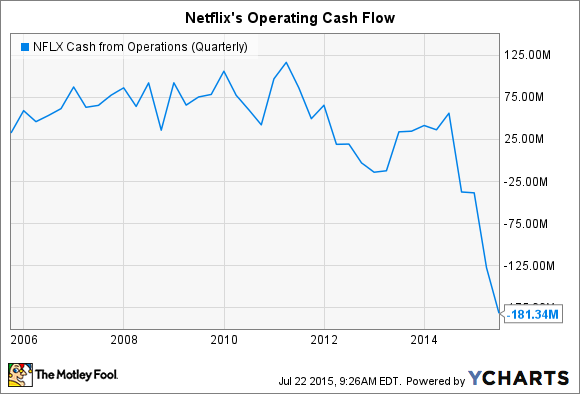 Investors can expect this financial pinch to continue for at least the next few quarters. The cash drag is "going to get worse as we invest more and more in content," Chief Financial Officer David Wells said in last week's conference call. One important consequence of this strategy is more debt.

Delayed pricing power
The last time Netflix raised prices U.S. membership growth slowed down substantially. That slump implied the company didn't have room to go much above its cut-rate $8 per month standard plan. For new members, at least, a monthly Netflix subscription wasn't an obvious value even at below the price of a single movie ticket.

Since then the streamer has made massive investments in its content quality, for example by tripling the amount of original and exclusive content to 300 hours of programming this year. Consumers are responding by flocking to the service -- and by soaking up all these new shows: The average user is now spending two hours a day streaming Netflix video content.

But it will be a while before investors know whether Netflix has the power to actually charge any more for its much-improved product: Hastings said in the conference call that management wants to keep its service "incredibly affordable" for the time being.

There are no immediate plans to raise prices commensurate with higher content costs. And while it's understandable that Netflix wants to prioritize growth right now, eventually its prices will have to reflect Netflix's shift into a premium streaming service that offers hit original series and prime access to blockbuster movies from studios like Pixar, Disney Animation, and Marvel.

Hastings held open the prospect of higher prices — eventually. "Over the next decade, I think we will be able to have more and more content and add more value, and then be able to price that appropriately," he predicted.

It's a fair knock against Netflix that its service isn't currently priced to reflect the value that subscribers are getting. Whether that's because management wants to soak up market share for now -- or because they're worried about a subscriber revolt at even slightly higher prices -- is debatable.