Qualcomm isn't quite in the dumps, but it just announced a new plan to improve its cost structure and financial performance.

While it may be premature to say that Qualcomm (QCOM 0.20%) is in dire need of a turnaround, seeing as how the business remains fundamentally strong, the mobile chip giant is embarking upon a series of actions that are unequivocally associated with turnarounds. Qualcomm reported earnings earlier this week (a thorough breakdown can be found here), and posted a second large consecutive drop in net income.

The bottom line shrank by 47%, which follows a similar 46% decline last quarter. In no uncertain terms, the QCT chip business is under pressure and the company reduced its outlook for the fiscal fourth quarter. Qualcomm cited three factors:

Those statements inevitably refer to Qualcomm's heavy reliance on both Apple and Samsung, which combined accounted for 49% of revenue last fiscal year. The "vertical customer" indubitably refers to the South Korean conglomerate, since Samsung has switched to its in-house Exynos processors in the Galaxy S6, although Qualcomm's Snapdragon is reportedly still in the running for the forthcoming Galaxy S7. Apple's continued share gains in China are also hurting other Snapdragon-powered handsets, although Qualcomm still enjoys its cushy baseband spot in the iPhone.

Here's how Qualcomm hopes to improve its performance.

This is the plan
The company has now announced a Strategic Realignment Plan in order to cut costs, boost profitability, and maximize shareholder value. The announcement confirms prior reports that Qualcomm was about to lay off thousands of employees -- Qualcomm will cut 15% of employees, which could end up affecting around 4,500 workers. It hopes to reduce annual spending by $1.4 billion, including a $300 million reduction in stock-based compensation. For context, the company expects total costs in fiscal year 2015 to be $7.3 billion.

At the same time, Qualcomm is seriously considering changing up its corporate and financial structure. Translation: It may finally go forward with splitting itself up into two distinct businesses. Activist investors, most notably Jana Partners, have been calling for a split, arguing that Qualcomm would be worth more as two entities. The so called sum-of-parts valuation, as it were.

Qualcomm is also standing by its capital return program and still expects to repurchase $10 billion in stock by March 2016. After all, the balance sheet remains rock solid, with $35.2 billion in cash on the books. That's up year over year and sequentially. Share repurchases, combined with reduced equity compensation, will be accretive to shareholders. After all, share repurchases are only accretive to the extent that they more than offset equity compensation and actually reduce shares outstanding. Qualcomm has been aggressively repurchasing shares in recent years and reducing shares outstanding, and the move will help provide a buffer for diluted earnings per share. 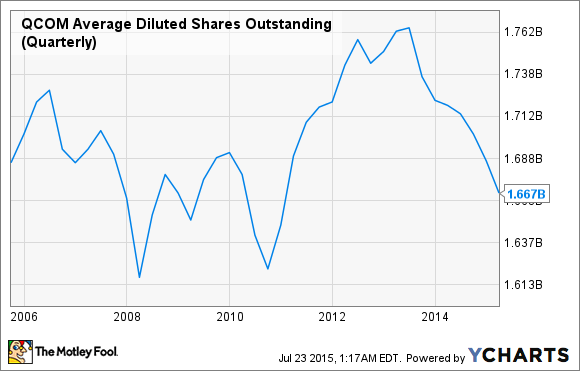 The company is also adding Mark McLaughlin, CEO of Palo Alto Networks, and Tony Vinciquerra, a private equity adviser, to the board of directions. On top of that, it has agreed to let Jana have a seat on the board. There will also be stricter controls on executive compensation while focusing spending where it counts. Shares fell modestly after the announcements as investors collectively shrugged.

While I sold my shares last month since I lost confidence in Qualcomm's ability to outperform the market (I'm a growth investor), these moves should be welcome news for investors. There are still some key risks to the business, but from a corporate finance perspective, the Strategic Realignment Plan is the right call.