It's not sold in the U.S. -- at least not yet -- but the all-new Buick Envision SUV is a big hit in China. Source: General Motors.

What were the analysts thinking? They were thinking that the big economic slowdown in China was going to be a huge problem for GM. But it didn't work out that way. GM delivered a sold second-quarter profit in China -- thanks in part to a brand-new Buick SUV.

Strong profits led by big-vehicle sales in the U.S. -- and in China
General Motors shares rose well over 4% on Thursday after the earnings announcement. Much was made of GM's success in North America, where big sales of high-profit pickups and full-size SUVs more than offset a slump in sales of GM's much-improved small cars. And indeed, GM North America's pre-tax earnings of $2.8 billion and operating margin of 10.5% were both deeply impressive.

But GM's results from China were also impressive. Despite expectations that GM's equity income from its Chinese joint ventures would be hit hard by pricing pressures in a slumping economy, the company managed a $27 million year-over-year increase, to $503 million. Profit margin was also impressive, at 10.2%.

GM executives readily admitted that conditions for new-car sales had become much tougher in China recently. But they also pointed to strong sales growth for the high-profit Cadillac brand (up 14% in the first half of 2015) and big sales numbers for Buick's SUVs.

Yes, Buick. Just as it does in the U.S., GM sells Buick's small Encore and big Enclave crossover SUVs in China, and both do well. But at the end of last year, it added a new midsize Buick SUV to its China lineup -- and that new Buick has turned out to be a hit with Chinese buyers.

The Buick Envision has been a big hit for GM in China
That new SUV, the Buick Envision, is closely related to the upcoming all-new version of the Chevrolet Equinox. It will eventually be sold in Europe (as an Opel, not a Buick) and possibly in the U.S. as well.

But right now, the Envision is exclusive to China -- and the Chinese are buying them like hotcakes. GM said it sold over 57,000 Envisions in China in the first half of the year, helping the Buick brand more than double its overall sales of crossover SUVs.

It's also fair to assume that all of those Envisions offset a lot of competitive price pressures on other GM models.

The worries that drove GM stock's swoon turned out to be unfounded
It's clear why analysts were worried. General Motors is second only to Volkswagen Group in the world's largest auto market, and VW has been struggling mightily in China recently. China sales for VW Group, which include the Audi brand, were down almost 4% in the first half of the year.

Unlike rival VW, GM managed a small increase in sales in China in the first half of the year. But it did so after announcing some price cuts, and analysts reasoned that those price cuts would squeeze GM's profits. That, in turn, would lead GM CEO Mary Barra to sharply trim her previously upbeat guidance.

Those concerns were probably the reason behind GM's recent share price swoon. 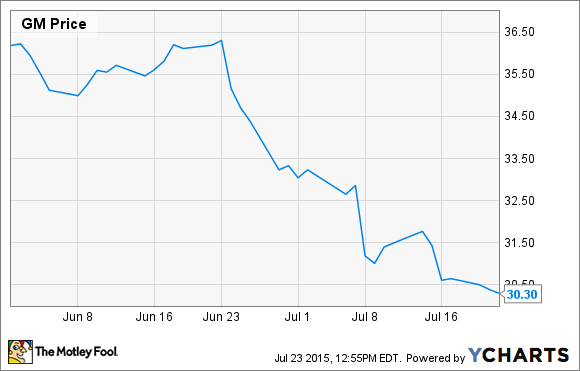 The conclusion that a China slump would hit GM's earnings hard was a reasonable one. But it turned out to be wrong, and GM's shares rose sharply on Thursday.

GM thinks they'll continue to be wrong. CEO Mary Barra and CFO Chuck Stevens both emphasized that they expect GM's China operation to continue to do well through the rest of 2015 and into 2016, despite the ongoing overall market pressures.

If so, SUVs -- and especially the new Envision -- might have a lot to do with it.