Debt and high payouts could come back to haunt yieldcos that aren't built to last.

Yieldcos are the hottest investment in the renewable energy industry these days. On the surface, they're relatively simple companies and investment vehicles. A yieldco buys solar, wind, or other energy-generating assets and generates long-term cash flow from those assets. That cash flow goes to investors in the form of dividends.

But there's a big difference between yieldcos. Asset base matters, as does financing structure. But what may matter most is how aggressive management is in buying a project, adding debt, and distributing cash flow. I recently talked to some of the key players in 8point3 Energy Partners ( CAFD ) to see what makes its yieldco different.

Cash available for distribution is a dangerous metric
One of the strange things about yieldcos today is their incentive structure. Sponsors, of which there is usually only one, typically have an incentive to increase cash payouts as quickly as possible to reach incentive distribution rights (which I explained for 8point3 Energy here).

This structure can lead companies to increase payouts short term to reach IDRs, while overlooking the financial health of the company by adding debt that could cripple operations long term. The best example of this is TerraForm Power ( TERP ), which is sponsored by SunEdison ( SUNEQ ).

Below is a look at a few of TerraForm Power's important operating metrics for the first quarter. Notice that cash available for distribution exceeds net income cash from operations, and is even higher than revenue minus interest expense.

So, TerraForm Power is clearly very aggressive in paying out cash and is aggressive in its financing structure as well. At the end of Q1, the company had $2.2 billion in debt with a weighted average interest rate of 5.9%, implying a $129.8 million expense for interest alone before accounting for depreciation of existing assets. Of course, acquisitions since then will add to that debt load.

While cash available for distribution is important for 8point3 Energy, so is building a long-term sustainable business. According to Boynton and Widmar, that will mean buying projects with higher internal rates of return, even if cash available for distribution initially is lower, keeping a conservative balance sheet, and even keeping some cash for growth long term at the expense of reaching IDRs more quickly. It's a conservative approach but it's also a strategy that's likely to be better for investors in the long run.

Different breeds of solar companies
While SunEdison is the market's darling today, First Solar and SunPower run more conservative solar businesses. They may not be high growth like SunEdison is, but they make money, which investors should be paying attention to. 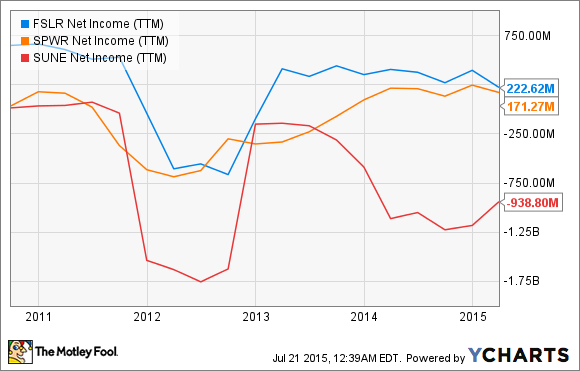 The yieldco is a similar story. 8point3 Energy is likely to focus on slowly acquiring strong operating assets that will lead to operating cash flows and net income long term, while TerraForm Power appears to be willing to let distributions exceed cash flow. It's as if TerraForm Power is paying out as much as it can now and will deal with the consequences later, while 8point3 Energy will err on the side of holding onto too much cash and growing more slowly.

Financials matter
As yieldcos operate longer in the market, we'll start to see how companies view growth, payouts, and long-term profits. But don't be mistaken that growth in assets or payouts today will lead to greater returns long term. Lots of companies are buying assets with debt or financial engineering that could come back and haunt them five or 10 years from now.

Mortgaging a company's future for growth or cash flows today isn't wise and I'm afraid that's what yieldcos like TerraForm Power are doing. 8point3 Energy Partners, on the other hand, won't grow assets as quickly and won't grow dividends near term, but if its managers comments hold true, it's going to have a better balance and more organic growth in the long term.

Starting with a 4.8% dividend yield that will grow double digits each year isn't bad, either. That's the kind of yieldco I will bet on.