Spirit Airlines is pursuing continuous improvement in its cost structure, which will fuel long-term profit growth.

After several years of stellar stock performance, Spirit Airlines (SAVE -0.16%) shares have hit a big rough patch in 2015. At its recent price of about $60, Spirit Airlines stock sits nearly 30% below the all-time high reached in late 2014. 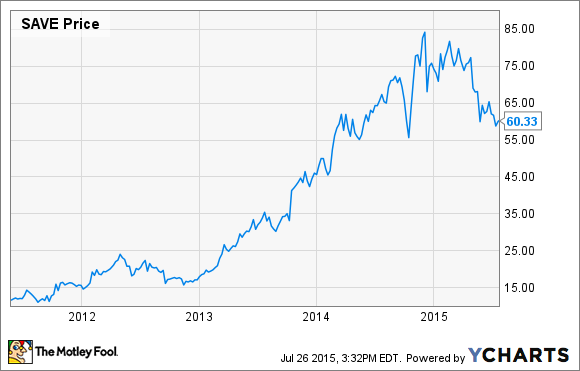 But I have argued for the past several months that this stock slide makes Spirit Airlines a better investment opportunity than ever before. And just last week, the company offered another tidbit of information regarding its strategies for delivering continued earnings growth.

Strong profitability already
It's ironic that Spirit Airlines' stock has been tumbling this year because analysts currently expect Spirit's profit to rise nearly 30% year over year in 2015 on the back of double-digit revenue growth. The company itself has forecast a full-year operating margin of 21.5%-23%, which would put it in the upper echelon of the airline industry.

Investors apparently reason that Spirit shouldn't get credit for its profit gains because they are driven entirely by fuel-cost savings. (Spirit currently expects to pay about $2.00/gallon for jet fuel in 2015, down from $2.99/gallon in 2014.) To be fair, Spirit's expected 2015 operating margin, while very solid, isn't as good as management's original projection of 24%-29.0%.

With this in mind, a key question is whether Spirit has the tools necessary to continue posting strong profit growth even after the recent swoon in oil prices ends -- as it inevitably will.

Cost improvement is the key
Fortunately, thanks to Spirit Airlines' focus on steady unit cost reductions, the company is positioned for stellar long-term earnings growth.

The most important factor in future unit cost reductions will be Spirit's ongoing growth. Simply by adding planes to its fleet, the company will be able to better leverage corporate overhead as well as costs at each individual airport it serves. By financing its new planes with debt rather than leases, Spirit is further reducing its unit costs.

Furthermore, Spirit is just starting a multiyear fleet transition that will make the A321 -- the largest member of Airbus' A320 aircraft family -- a key part of its fleet. The A321 has significantly lower unit costs than the A319 and A320 planes that make up the vast majority of Spirit's fleet. By the end of 2019, Spirit plans to operate 40 A321/A321neo planes: up from just two today.

Spirit is also now making concrete plans to increase seating density on its A320s and A321s. By fitting more seats on each plane, Spirit will reduce its unit costs even further. Spirit's management had mentioned this possibility in an investor presentation in June. But the company's Q2 earnings release had more details.

First, Spirit is starting to take delivery of A320s with Airbus' new "SpaceFlex" cabin. This is a new cabin design with a more space-efficient rear galley and lavatory setup. The result is that Spirit will be able to add four more "Big Front Seats" on its A320s, providing an incremental source of high-margin ancillary revenue.

Second, Spirit received FAA certification to add 10 additional seats to the A321s it is receiving in 2015 and beyond. Spirit's A321s already offer significant unit cost benefits relative to its A320s. Adding 10 more seats won't add much in the way of incremental costs, and will bring in extra revenue on routes with the most demand.

By the end of the decade, 35%-40% of Spirit's capacity could be generated by these extremely efficient A321s. This should enable the company to achieve its stretch goal of reducing its nonfuel cost per available seat mile to less than $0.05.

That would represent a roughly 10% reduction from today's level. Spirit Airlines contends that it already has a 14% adjusted nonfuel unit cost advantage over the closest competitor -- and these developments will extend that advantage.

Low costs will drive big profits
Improving what is already an industry-leading cost structure will unlock big long-term growth opportunities for Spirit Airlines. The company's business model relies upon using lower fares to stimulate travel demand among people who would not otherwise fly. The lower Spirit can push its unit costs, the lower ticket prices it can accept while still earning a solid profit margin. With lower ticket prices it can stimulate more demand.

Spirit has plenty of viable growth opportunities with its current cost structure, and as its unit costs decline, that list should only grow longer. This could allow Spirit's margins to move even higher.

But most importantly, it will allow Spirit Airlines to grow to be several times its current size over the next decade. Given that the company's profit margin and return on invested capital are already very strong, that's enough to justify a much higher valuation than the 12 times forward earnings that investors are paying today. Long-term margin expansion would just be a bonus.