When electric-car maker Tesla Motors (NASDAQ:TSLA) reports second-quarter results on Wednesday, Aug. 5, investors will likely be curious about the company's guidance for Q3 and an updated outlook for the rest of the year. Any scrutiny of Tesla's expectations for future results is justified, as the market has priced in merciless growth.

Growth needed to reach 55,000 deliveries
When Tesla announced fourth-quarter results in February, the company shared an aggressive figure for expected 2015 deliveries: 55,000 vehicles. Achieving this year-end outlook for vehicle deliveries implies 74% year-over-year growth in vehicle sales, up from 41% growth in 2014.

Guidance for Tesla's third quarter will be especially important since Tesla is relying heavily on the second half of the year to achieve its ambitious growth targets this year for vehicle sales. Investors will be looking to Tesla's guidance for third-quarter deliveries to see if Tesla is still expecting to meet 2015 sales goal.

"About 40% of these deliveries are planned for the first half of the year," Tesla advised shareholders in its fourth-quarter letter to shareholders. Data for chart retrieved from Tesla's quarterly letter to shareholders, along with Tesla's second-quarter press release of second-quarter vehicle sales. Data for quarters with asterisks are based on author estimates based on extrapolations from comments by Tesla management and the assumption that Tesla achieves its full-year guidance. Chart source: Author.

The first realistic preview of potential Model X sales?
Guidance and commentary from management in Tesla's second-quarter letter to shareholders and during its quarterly conference call could also provide the first preview of what Tesla is expecting from Model X, which is supposed to start getting delivered to the first Model X customers toward the end of Q3. While Tesla's guidance for 55,000 vehicle deliveries in 2015 includes its Model S sedan and its upcoming Model X SUV, the company hasn't yet given an explicit forecast for Model X sales.

For now, comments from Tesla management suggest the company is expecting about 5,000 Model X deliveries in 2015. 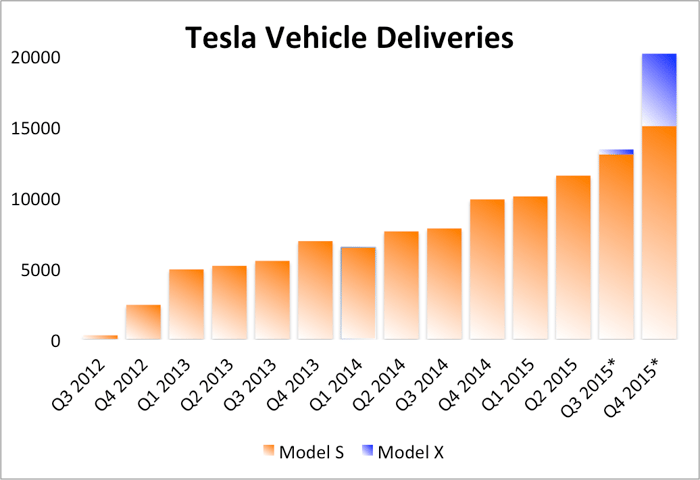 Data for Q1 and Q2 retrieved from respective quarterly SEC filings and quarterly letter to shareholders from Tesla. Asterisks indicate author estimate based on commentary and forecasts by Tesla management. Chart source: Author.

But given that Tesla's second-quarter earnings release date falls only about a month and a half before deliveries of the first Model X units are supposed to begin, the company may have clearer vision into expected Model X numbers for the rest of the year.

Of course, any guidance for Model X deliveries should be taken with a grain a salt. Even CEO Elon Musk has said forecasting the trajectory of the company's production ramp for Model X is incredibly difficult.

All in all, for Tesla to continue on its planned path for 2015 deliveries, look for the company to guide for about 13,000 or more total deliveries in Q3 and to maintain its full-year outlook for 55,000 total vehicle sales. And keep an eye out for a bonus figure on Tesla's expectations for Model X deliveries.