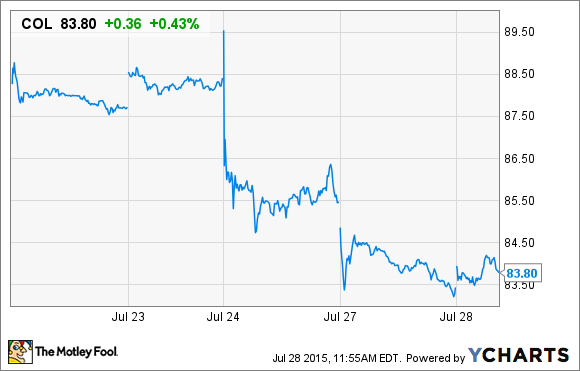 Rockwell Collins stock fell off a cliff last week. But what pushed it? COL Price data by YCharts.

In a busy week for defense stocks last week, Rockwell Collins' (NYSE: COL) earnings report kind of got lost in the crowd. Today, let's fix that.

In a week when most of its aerospace peers reported Q2 earnings, aviation electronics specialist Rockwell Collins (which operates on a different calendar) reported earnings for its own fiscal third quarter. Rockwell Collins stock is down roughly 5% since the news came out Friday, so you can tell investors weren't entirely thrilled with the results.

But should they have been? Let's review:

In its fiscal Q3 2015 earnings news, Rockwell Collins reported that:

None of which, I have to say, sounds particularly bad. Certainly not "subtract five percent from the market cap" bad -- which is what investors have done to Rockwell Collins stock in the days since the news came out. The fact is, Rockwell Collins' numbers appear to have actually exceeded analyst estimates for the quarter.

So, what exactly is it that investors are so upset about at Rockwell Collins?

Guidance, maybe?
Conceivably, investors could be reacting to earnings guidance for Rockwell Collins stock. But honestly, there wasn't anything particularly objectionable in there, either. Management basically reiterated the same guidance it had previously given:

Minus capital spending of $200 million, that should yield free cash flow of perhaps $525 million to $575 million. What does all of this do to the stock's valuation?

Valuation
Working from the midpoints of earnings guidance, Rockwell Collins shares that cost roughly $84 today are selling for 16.1 times current-year earnings. For a stock paying a 1.5% dividend and expected to grow profits at 10.7% annually over the next five years, 16 times earnings seems a bit high.

But the bigger problem is with the valuation calculated based on free cash flow: $550 million-ish FCF divided into Rockwell Collin's $11 billion market cap results in a P/FCF ratio of 20. Divided into the company's $13.5 billion enterprise value (the stock's market capitalization, plus its net debt) results in an even less attractive enterprise value-to-FCF ratio of 24.5.

And this, in a nutshell, is why I believe investors were right to sell Rockwell Collins stock last week -- not because the earnings report was "bad" per se, but because the stock quite simply costs more than its earnings and free cash flow justify.

Simply put, Rockwell Collins stock cost too much. That's why it went down -- and why it deserved to.