Genworth Financial (NYSE:GNW) hasn't had much luck lately, at least in terms of beating analysts' expectations, and the second quarter didn't change the trend. Genworth reported numbers that missed on both the top and bottom lines, sending shares to a new 52-week low in the after hours. With shares of this leading insurer down by nearly 50% over the past year, is there value to be found here, or should investors run for the exits? 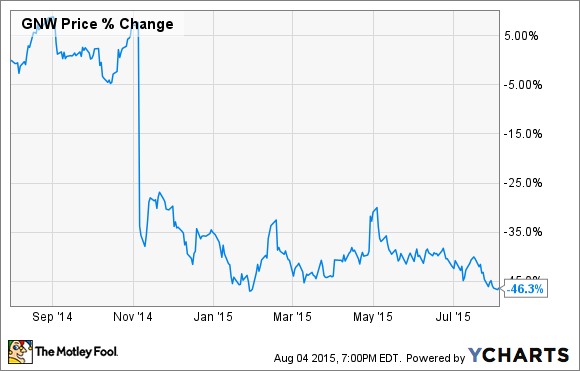 For the second quarter, Genworth reported a loss of $0.39 per share, but this showing included a significant one-time loss related to the planned sale of its lifestyle protection insurance business. Excluding this item, Genworth's net earnings were indeed in the black at $0.24 per share, but they still missed analysts' estimates of $0.26 and were 23% less than the company earned during the same quarter last year.

Revenue was also significantly below expectations, coming in at $2.16 billion versus analysts' projections of $2.39 billion, and down from $2.19 billion last year.

Finally, over the past year, Genworth's book value per share fell 16% to $27.52. Even so, Genworth trades at a ridiculously low price-to-book multiple of just 0.24, which investors should view as a red flag (more on that later).

Some progress has been made ...
Not all of Genworth's earnings report was bad. It seems the company's strategic efforts to simplify its business and cut costs are starting to pay off. The expected sale of the lifestyle protection insurance business and the recent reduction of its stake in Genworth Australia Mortgage Insurance by 14% are expected to generate more than $600 million in 2015. These moves also serve the purpose of simplifying the company's operations, which has been an ongoing goal.

Cost-cutting has also been a priority recently and seems to be working out so far. Through a combination of headcount reduction and lower spending, the company expects to experience cost savings of $30 million this year and between $40 million and $50 million in 2016. Now, this isn't quite enough to meet the previously stated goal of $100 million in pre-tax savings by the end of 2016, but these are significant sums of money -- considering that Genworth's quarterly profit was $119 million, this amount of cost savings could make a big difference in the bottom line.

Another area where Genworth made progress was bolstering its capital levels to comply with private mortgage insurer eligibility requirements. The company intends to continue pursuing transactions throughout the rest of the year that will help ensure financial flexibility and capitalization in excess of requirements.

Tom McInerney, Genworth's president and CEO, appears optimistic, saying: "We are encouraged with our second-quarter results in the Global Mortgage Insurance Division and remain focused on initiatives aimed at strengthening and improving U.S. Life Insurance Division results. We are making steady progress on our strategy to strengthen and simplify our businesses."

... but there's a long way to go
While recent quarters have indicated that some progress is being made to turn Genworth around, there's still a long way to go, particularly in regard to Genworth's long-term care business, which has been a huge headache for Genworth and its investors for some time now. And the extraordinarily low price-to-book multiple suggests that investors aren't confident that the LTC business can be profitable, and that there may be more losses ahead than Genworth is prepared to handle.

The company is still seeking to unload other business lines, such as Genworth Life and Annuity, and until it does so, the company's future is uncertain to say the least.

If Genworth is able to successfully simplify its business, complete its cost-cutting initiative, and sell of its unwanted segments, it could prove to be an excellent long-term investment at the current share price. However, at this point, that's still a big if -- hence the cheap valuation.