As we inch closer to fall, the time has begun once again to think about the release of 2016 car models. For some automakers, not much is changing. Others, however, have really decided to roll the dice on models that have historically been heavy-hitters.

With that in mind, we asked three of our Foolish auto contributors to name one redesigned vehicle they're watching that they believe could really surprise the market in terms of sales. Here's what they had to say.

John Rosevear
One of the big themes in U.S. auto sales recently is the surge in SUV sales, which is coming at the expense of sales of sedans. Sales of the longtime midsize-sedan class leaders, Toyota's Camry and Honda's (NYSE:HMC) Accord, are both down more than 13% this year -- as are most of the other contenders.

So why am I excited about a new sedan?

It's because I think that General Motors (NYSE:GM) has hit it out of the park with its 2016 Chevrolet Malibu. The new Malibu is on an all-new architecture. It has a longer wheelbase than the old car -- and a lot more legroom in the backseat -- but it's 300 pounds lighter. That'll make it more fun to drive, while helping fuel economy.

Inside, the interior is a huge step up. I sat in a preproduction example a few months ago. The materials are top-notch, a step ahead of Toyota and Honda, and even ahead of Ford's acclaimed Fusion. In back, there's ample room for six-foot adults (I know because I am one).

Under the hood, there's a new turbocharged four-cylinder that should be good for 37 miles per gallon on the highway -- or, optionally, an all-new hybrid drivetrain based on the Chevy Volt's technology. GM doesn't have official EPA ratings yet, but they think the hybrid will be good for 47 miles per gallon combined -- a terrific mark for a big five-passenger sedan.

And for GM shareholders, the kicker: GM says that the new car will generate about $1,500 more profit on each sale.

The current Malibu is OK, but not great; in this class, that doesn't cut it, and sales have been lackluster. I don't think that'll be true of its replacement.

Daniel Miller
While there are numerous 2016 models that will likely exceed expectations, one that many investors have overlooked is the 2016 Hyundai (OTC:HYMTF) Tucson, which is receiving a complete overhaul.

Here's a look at the vehicle's sales history since it hit the roads as a 2005 model: 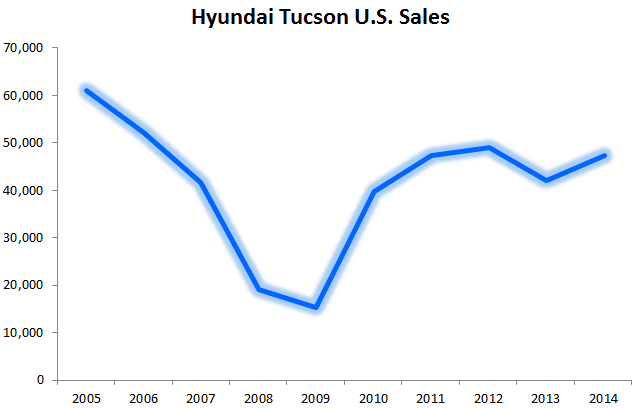 The model started off hot during the first year despite lackluster designs, but quickly lost consumers' interest in the years leading up to the recession, when sales of SUVs, and auto sales across the industry in general, plummeted. In 2010 the Tucson took a big leap forward with its redesign while remaining a cost-effective choice for consumers not looking to spend huge bucks for an SUV or crossover.

Fast-forward to Hyundai's 2016 Tucson, its best design yet, and investors will likely be surprised with the jump in its sales next year.

Part of the reason I believe the Tucson will exceed expectations next year is because of a balanced product lineup with no gaps. 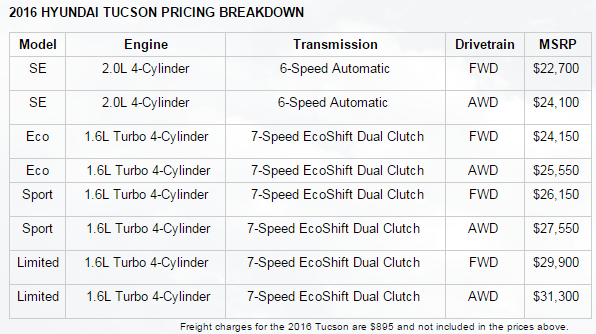 What's even better, though, is that well-respected critics such as Car and Driver noted that the base model without all the high-tech and premium features is still a very impressive product. The vehicle itself is bigger, roomier, and more refined than its predecessor, and a new turbocharged engine is available on upper-level trims to improve fuel economy and make the Tucson more competitive against the segment's best models.

On top of the 2016 Tucson being improved in just about every aspect compared to its predecessor, SUV and crossover sales are on fire in the U.S. market. With these two factors combined, expect the 2016 Tucson to exceed expectations and reach Hyundai's goal for the vehicle to sell 90,000 units in the U.S. next year, almost double what it's expected to sell this year.

Sean Williams
If you're looking for a vehicle that could really turn some heads in 2016, but which is hardly what you'd call under-the-radar, look no further than the all-new 2016 Honda Civic.

The 10th-generation Civic from Honda will maintain some of the features that have made it a strong-selling vehicle for more than a decade. In particular, the 2016 Civic will come with a variety of engine options, including a turbocharged 1.5-liter four-cylinder engine (which is an upgradable option) and a base-model 2.0-liter four-cylinder engine. With a push toward improved fuel efficiency, the all-new Civic, which will go on sale this fall, could get upward of 40 mpg, all while costing less than $19,000 for the base model. In other words, this will still be the cost-conscious, fuel-efficient vehicle that many Americans have come to love -- but with a twist.

The big twist in the 2016 Civic is that consumers are getting something that's a lot sportier and more stylish than in years past. For the first time ever, Honda will be introducing a four-door Civic with a hatchback (known as its five-door), although it'll probably debut after the sedans this fall to give consumers time to digest the new exterior (and relatively minor interior) changes.

The other thing consumers will note is its aggressively redesigned front and rear end, which should help it appeal to millennials and better compete against the likes of the Ford Focus, Toyota Corolla, and Chevrolet Cruze. Motor Authority, which recently got its hands on spy shots of the 2016 Civic, notes that much of the aggressive styling of its concept car debuted at the New York Auto Show earlier this year will remain in the final production vehicle.