If it wasn't for solar power, the California drought would be a lot worse.

With no end in sight, the Golden State continues to suffer from one of the most devastating droughts in its history. According to the National Centers for Environmental Information, 2014 was the warmest year in California's history, and 2015 is on track to be even hotter. This has the potential to impair the state's power grid, for higher temperatures mean less snowpack in the mountains, and less snowpack means less hydropower generation. The Energy Information Administration, or EIA, reports that "annual average contribution from hydropower to electricity generation in California decreased from 23% in 2011 to 9% in 2014." Does this mean that Californians can expect rolling blackouts anytime soon, or will other sources of power generation be able to compensate? Apparently, the EIA believes that Californians need not worry -- the power grid should maintain reliability.

Who's to thank for helping to keep the lights on? The EIA recently announced that the "drop in hydroelectric capacity has been partially offset by more than 2,000 MW of new renewable capacity that has come online in the state since June 2014."

In this case, new renewable capacity has come in the form of solar, suggesting that California (and any other state concerned about maintaining grid reliability) can look toward new solar facilities as a way to mitigate the deleterious effect of lower hydroelectric generation (or any other threatened energy source). As these states turn their attention to solar, companies that specialize in utility-scale projects are set to profit from the opportunities and so may investors' portfolios.

First up
One of the biggest names in developing utility-scale solar projects in California is First Solar (FSLR -0.28%). For a time, the company could lay claim to helping develop the largest solar facility in the world -- the Topaz Solar Farm. Consisting of over 8 million solar panels, the 550 MW project, located in San Luis Obispo County, came online in November 2014, and although it's no longer the largest, it certainly deserves recognition. Rivaling the achievement of the Topaz Solar Farm is the Desert Sunlight facility. Also offering 550 MW of capacity, Desert Sunlight began operations in December 2014 and is one of the projects identified by the EIA for helping to shore up the grid.

In its most recent earnings report, management noted the strong value in its future projects: "We continue to execute on our advanced-stage utility-scale project pipeline and expect a substantial portion of our consolidated net sales, operating income, and cash flows through 2016 to be derived from several large projects in this pipeline. . ." Of the projects mentioned, four are located in California -- two, which are contracted, total 400 MW; two, which are not yet sold or contracted, total 580 MW. The company may be understating just how important the completion of these projects is, for its net sales and operating income has been on a steep decline over the past year and successful completion of these projects is essential. 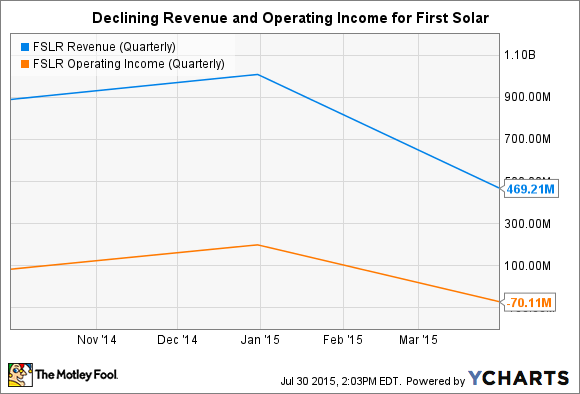 A shining powerhouse
First Solar isn't the only PV manufacturer making big news in California. SunPower (SPWR -3.58%), a PV manufacturer that provides solutions for residential, commercial, industrial, and utilities, has developed a respectable presence of its own in the state. Supplying over 1.7 million solar panels, SunPower designed and constructed the 579 MW Solar Star Projects in Kern and Los Angeles counties.
Utility-scale projects are an important segment of SunPower's business. For the second quarter of this year, revenue from the power plant segment totaled $165 million -- 44% of its total revenue for the quarter. Further demonstrating the commitment to utility-scale, SunPower recently announced its acquisition of 1.5 GW of U.S. solar power plant development assets from Australia-based Infigen Energy.

A bright partnership
Clearly, utility-scale power plants are an important part of First Solar and SunPower's businesses; however, they just became a lot more important. Following suit with a number of other renewable energy companies, First Solar and SunPower recently partnered on the formation of a joint yieldco -- 8point3 Energy Partners (CAFD). SunPower and First Solar have 40.7% and 31.1% interest in 8point3, respectively.

The yieldco will purchase solar power plants from both First Solar and SunPower, then, with the cash flows it generates from the projects, distribute dividends to investors. Currently, the company intends to offer an annual dividend of $0.84 per share, which as of today's closing, represents an annualized yield of 5.3% It's an enterprise that requires the skilled management of large amounts of debt, and, since the company only started trading in late June, I'm hesitant about picking up shares anytime soon. But, I'll be keeping an eye on it.

Foolish final thoughts
According to the EIA, California is the first state to generate more than 5% of its electricity from utility-scale solar. That's an impressive accomplishment, one that ended up benefiting the state in an unexpected way: by playing a vital role in the maintenance of the state's power grid as demand peaks during the summer months. Companies like First Solar and SunPower, individually, will benefit from the increased demand for carbon free energy that hydro power cannot currently provide, and should both see a nice boost from their joint venture yieldco. For those investors willing to take on a little more risk, donning a pair of sunglasses and taking a closer look at 8point3 Energy Partners may be the way to go.

Scott Levine owns shares of SunPower. The Motley Fool has no position in any of the stocks mentioned. We Fools may not all hold the same opinions, but we all believe that considering a diverse range of insights makes us better investors. The Motley Fool has a disclosure policy.