Honda (NYSE:HMC) is ruling the roost with the CR-V and the newly launched HR-V in the small crossover and compact crossover segments, respectively. Their sibling, the midsize SUV Pilot, isn't doing too badly, either. Pilot sales are up 36% from January through June, and with the launch of the redesigned 2016 Pilot last month, there's a strong case for the SUV to become one of the top sellers in the midsize SUV segment.

So far, almost 1.5 million Pilots have made their way into American homes, and the model is now in its third generation. Honda launched the Pilot in 2002 and impressed Americans with its fuel efficiency and sturdiness. The Pilot's popularity can largely be attributed to its ruggedness, which buyers thought was suitable for everyday use. A multitasking vehicle, the eight-seat Pilot could be used just as efficiently for a family car as for transporting heavy loads.

However, Pilot sales slumped 14% in 2014, a year in which rivals Ford Explorer and Toyota Highlander registered record sales. One big reason for Pilot's bad performance was its truck-like looks while other SUVs turned sleeker.

Pilot's rivals were ahead of it in looks as they were either completely revamped or tweaked. Toyota gave Highlander a complete makeover in 2014 and the all-new model was lapped up by buyers, giving the SUV its best sales year in more than 10 years. After launching the fifth-generation Explorer in 2010, Ford came out with a sports trim in 2012. Pilot was given minor facelifts in 2011 and 2012, but hadn't done a total makeover since 2008. With rivals upping their game, Pilot too needed a complete makeover now.

Against this backdrop, the all-new 2016 Pilot has a huge responsibility on its shoulders, but the good news is that SUVs are trendy again, and Honda has put in a lot of new features in the vehicle to endear it to consumers.

A new Pilot program
The reinvigorated model looks more stylish, less angular, and is three-and-a-half inches longer than the previous incarnation.  Honda has also enhanced the vehicle's appeal by offering more space -- a big draw for potential customers, since around 95% of the Pilot's buyers are families. The aluminum hood has made the car 300 pounds lighter, and coupled with a new powertrain, that will help cut down on fuel consumption.

Honda claims the Pilot is the most fuel-efficient midsize SUV in the market, and the company isn't off the mark -- the 2016 Pilot's average mileage is 23.1, compared with Explorer's 18.2 and Highlander's 20.3.

Honda has upgraded the Pilot's safety features, too. The new cruise-control option can warn against potential collision and adjust the car's speed to that of the vehicles in front. The optional start-stop system disconnects the engine when the car halts (say, at a traffic light), and starts back up when you lift your foot off the brake, cutting fuel costs. The Road Departure Mitigation feature can put the vehicle back on track if it's reached the periphery of its lane.

A bigger share of the pie
Low oil prices, coupled with Americans' love for traveling, kept SUV sales well ahead of popular sedans last year. And recent data shows that the trend is unlikely to die down soon. In May, SUV sales in the U.S. were more than a third of the total new vehicles sold, and in the year through June, while car sales have dropped 1.7%, SUV sales have risen by 11.8%.

The midsize SUV segment, which holds a major share of the entire SUV market, is crowded with offerings, such as the Jeep Wrangler, Ford Explorer, Toyota Highlander, Subaru Outback, and many more. The following chart, showing midsize SUV unit sales in the U.S., shows the Honda Pilot in sixth place, but note that its growth rate is way ahead of that of the top five players and the industry average of 12.9%. 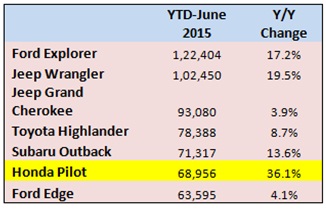 Though a significant part of this volume growth came because of discounts (Honda didn't want the launch of the redesigned Pilot to cannibalize its predecessors' sales), the edgy 2016 Pilot could win more customers' hearts -- especially with its competitive entry-level price of $29,995. If the growth rate is maintained, Pilot sales might reach their historical high once again, and the vehicle might find its place back among the top five.