The offshore drilling business is either going to be a boom or a bust for investors over the next five years. The biggest players in the industry are reporting strong earnings for 2015 so far, but low oil prices have cast a shadow over the industry that the market won't forget about.

With Ensco (OTC:VAL) and Transocean (NYSE:RIG) earnings out recently, it's a good time to look at what's going well and what's troubling for investors going forward.

Profits rolling in
While offshore drilling stocks have been in the dumps, their profits haven't been. Ensco reported net income of $260.3 million, or $1.11 per share, in the second quarter and Transocean earned $342 million, or $0.93 per share.

The strong results are because both companies had a large backlog of revenue to fall back on. Offshore drilling contracts, especially those in deep water, are often signed for multiple years so the last year of low oil prices hasn't hit them quite yet.

Even after the struggles the industry has had, Ensco ended the second quarter with $7.4 billion in contract backlog and Transocean had $18.6 billion in backlog as of July 15, 2015. Seadrill (NYSE:SDRL), which hasn't reported second-quarter earnings yet, had a contract backlog of $8.9 billion on May 27, 2015 and like Ensco and Transocean it will likely be very profitable in the second quarter.

But the market isn't worried about last quarter's results -- it's looking at the future and that's where there are more questions than answers. 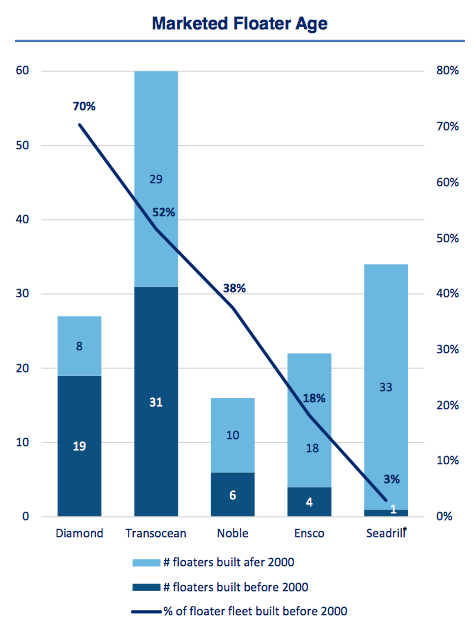 Having a young fleet is important and that's why Seadrill is well positioned in offshore drilling. Image source: Seadrill.

Dark clouds forming over the future
There's a lot of uncertainty in offshore drilling today, but most of that uncertainty is in deep water. It's much more costly to drill for oil or natural gas in deep water and contracts in that segment have all but dried up.

This even represents a complex challenge for companies. For example, $7.2 billion of Seadrill's $8.9 billion in backlog is in the floater segment, which is primarily deep water. That's a lot of revenue in the backlog but there isn't a lot of activity in that market once rigs go off contract. The result is older rigs having to be scrapped or cold stacked, which is happening at a rapid rate, even for the largest drillers in the industry.

The silver lining from Ensco's conference call was that it expects shallow water jackup rigs to be in higher demand later this year and into 2016. But even the most optimistic energy observers don't see oil popping to $100 per barrel anytime soon and that means explorers will be cautious signing up for a multi-year drilling program in deep water.

It's a risk to buy offshore drillers
The market is certainly seeing the negative side of offshore drilling and for investors. It's a high-risk/high-reward investment right now. I'm sticking with my investment in Seadrill, which at least has one of the youngest fleets in the industry and will reduce its risk of cold stacking or retiring rigs near term. With that said, it also has billions in newbuilds under construction and a balance sheet bloated with debt, so I'm not without risk.

For Ensco and Transocean, I see the same risks but even greater downside if they're forced to stack or scrap rigs over the next couple of years. The profits they're seeing today could dry up quickly, and if they're left with smaller fleets and lower market share when the industry finally recovers, it could be bad news for investors long term.

No matter where you look in offshore drilling, there's a lot of risk for investors and, unfortunately, I don't see that ending anytime soon.