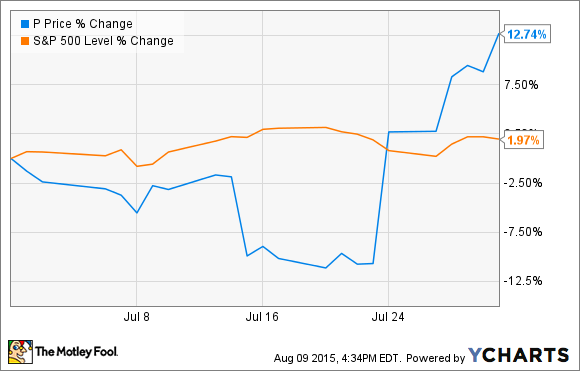 Shares of Pandora Media (NYSE:P) gained 12.7% in July, according to data from S&P Capital IQ. The surge didn't come easily, though. The digital-media service saw its shares falling more than 11% before staging a comeback late in the month. Even then, the recovery and final gains arrived like a two-stage rocket ship, burning through two distinct fuel tanks to reach its final destination.

Against the backdrop of Apple's finally launching a Pandora-like music service under its own brand, Pandora shares plunged mid-month on bearish analyst comments and another personalized radio launch from Spotify.

Pandora's second-quarter sales rose 30% year over year to $287 million. Adjusted earnings per share rose by a penny, landing at $0.05. Analysts were looking for earnings of $0.02 per share on $283 million in top-line sales, so Pandora exceeded both of these essential targets.

The streaming music service grew its active listener base by 3.9% during the quarter, and each user also increased the hours spent listening to Pandora by roughly 1%. When Pandora CEO Brian McAndrews says that Apple's competing launch had "no effect" on Pandora's business, these results help him walk the talk.

"While we respect Taylor Swift, we think momentum behind artist's fair pay is fading and subverted by NY Congressman Jerry Nadler's radio bill which is just a ... reiteration of the old IRFA,"  Tullo wrote in a research note. For those unfamiliar, IRFA is an proposed amendment to various Senate and House bills that would put online radio stations' music royalty expenses on equal footing with terrestrial radio. The idea keeps getting defeated in various congressional reviews, only to reappear attached to another larger bill.

Pop star Taylor Swift has voiced strong opposition to IRFA-like royalty programs, even pulling her content catalog from services supporting them. Tullo sees these moves as short-lived tantrums, great for quick publicity but unlikely to affect long-term legislation on the issue.

"We think most of the negative Pandora story is baked into the cake, and while we may be a little half cocked, we are upgrading Pandora to Overweight from Market Perform" Tullo said. "We like its market share position in IP Radio and its potential to add new content and expand internationally once the CRB rate hearings are resolved."

And on that bullish note, Pandora's 24% swing from mid-July doldrums to final gains was complete.