After years of market-beating returns, mobile-chip giant Qualcomm (NASDAQ:QCOM) finds itself fighting -- and in many ways losing -- a two-front war of attrition, much to its investors' consternation. 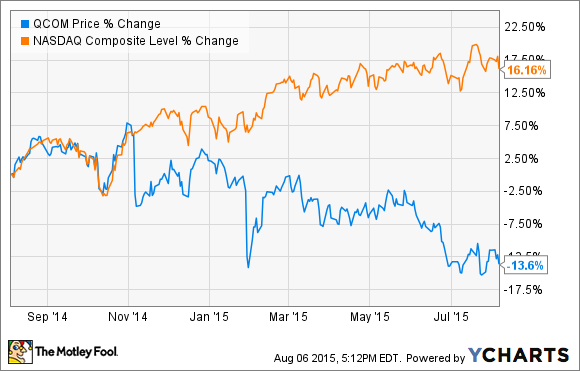 With each of these issues contributing to its recent subpar earnings report, Qualcomm sought to assuage investors by announcing a restructuring to bolster its profitability amid uncertainty in its once-vaunted business. But exactly to what degree will its restructuring benefit Qualcomm investors? Let's take a look.

Restructuring review
The presentation on Qualcomm's recently announced restructuring tells us that management's efforts will focus on two primary types of actions.

For the purposes of this analysis, let's drill down on the cost-structure improvements Qualcomm intends to make. Between a number of cost-cutting measures, Qualcomm estimates that it can lower its full-year operating cost base from roughly $7.3 billion in FY '15 to $6.2 billion by the end of FY '16. Here's an itemized version of the sources of the cost-cutting. 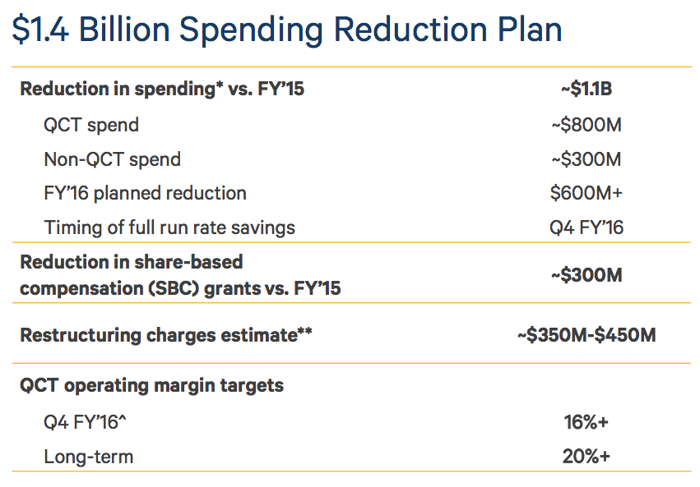 The majority of the cost reductions will come from reducing spending at Qualcomm Technologies, or QTC -- its largest reporting segment -- by $800 million. To achieve this goal, Qualcomm will reduce segment headcount by about 15%, meaningfully pare back the unit's part-time workforce and engineering team, more efficiently allocate resources to lower-cost geographies and reduce high-cost office locations, and more.

Beyond rationalizing QTC's cost structure, Qualcomm's restructuring efforts focus on two additional areas -- a vague $300 million reduction in "Non-QTC spend," and reducing stock-based compensation by $300 million. Slimming costs by $1.1 billion annually sounds meaningful from an investor's perspective. However, there's also a case to be made that these improvements do little to address the more systemic overhangs weighing on Qualcomm.

Winning the battle, but what about the war?
The fundamental issues facing the company stem from softening demand for its chips and potential pricing pressure in its IP licensing business, not a bloated cost structure. Saving money wherever possible helps, but crucially, it fails to address the underlying cause of Qualcomm's recent troubles. It's virtually certain that Qualcomm's sales will decline year over year in its current fiscal year. More worrisome, consensus estimates project a further 5.4% sales contraction in fiscal 2016.

However, even if Qualcomm returns to Samsung's good graces in next year's handset lineup, Samsung still enjoys virtually all the leverage in the supplier-purchaser relationship. And given its now-demonstrated willingness to cut Qualcomm out of its devices in favor of its own homegrown applications processors, the stability of Qualcomm's business with Samsung remains unpredictable.

Trading at just 13 times forward earnings and yielding 3.1%, Qualcomm stock certainly seems attractive on a pure valuation basis, especially since its cost cuts will probably more than offset its sales declines in the coming quarters. If Qualcomm's upcoming chipsets can find their way into one or more of the Samsung devices in the year ahead, investors buying today could benefit meaningfully from the presumable upward correction in the stock that might accompany an unexpected return to growth.

At the same time, and more importantly for long-term investors, Qualcomm's core revenue and profit drivers remain under duress in their own ways. So while Qualcomm's restructuring certainly makes sense in light of the company's recent struggles, the move alone will probably only make a moderate difference to a company facing significant headwinds in the years to come.