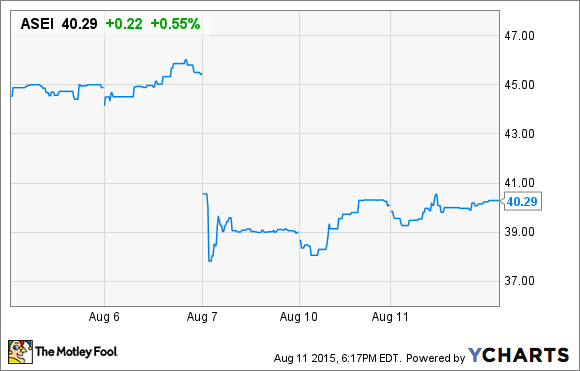 Reporting a 12% slide in revenues, and a net loss for the quarter (in contrast, last year's Q1 was profitable), AS&E shareholders were quickly hit with a 14% decline in share price. The shares have stabilized a bit since, but even so, we're still down more than 11% from pre-earnings share prices.

So how bad was the news? Here's how bad:

In short, AS&E made an effort to offset bad news with promises that things will get better. But will they?

What's next for AS&E
It's hard to say. As a company whose stock in trade is building X-ray systems for detecting bombs, guns, and other nasty stuff that people try to smuggle aboard airplanes and through cargo ports, AS&E's business does best when newspaper headlines look worst. AS&E stock tends to thrive in an environment of widespread terrorism -- and we haven't had many big terrorism scares here in the U.S. in recent months, thank goodness.

Failing a surge of domestic terrorism, AS&E is retooling its business to try to make more money with the business it's got. The company has restructured itself into two main business units: Detection Products and Detection Services. Management hasn't made public a lot of detail on what this "realignment" entails, or how the two businesses will differ. But AS&E does say that it expects the realignment to "support revenue growth," reduce "management cost structure," and make possible the above-mentioned $6 million in annual cost savings. A review of the company's income statements on S&P Capital IQ suggests that this, alone, should be enough to return the company to consistent GAAP profitability -- assuming the savings materialize.

The cash-flow picture is a bit murkier -- and less optimistic. Cash burn in fiscal Q1 2016 improved to just $6.1 million, a 30% reduction from fiscal Q1 2015 levels, and certainly good news. Free cash flow for the past 12 months, however, still stands at negative $11.1 million. It will take more than $6 million in annual cost-cutting to get FCF back into the black. Somewhere, somehow, AS&E simply has to get more cash flowing into its coffers, at the same time as it cuts costs.

With any luck, the increase in new order bookings will help with that. Fingers crossed.